New Insecticide DS video crawls out of the woodwork

Never seen a sexy ant before? That might be about to change

Sometimes you think video games must, by now, have covered off pretty much every idea there is. But it seems they haven't, because how many film noir-inspired detective games starring insects and set in a post-apocalyptic world where all humans have died from atmospheric toxic poison can you name?

Upcoming Gamecock title, Insecticide, certainly gets top marks for an original plot. And when we got hands on with the game earlier this year, it didn't fare too badly in terms of gameplay, either.

You play as sexy ant-like detective Chrys Liszt (geddit?) who, with sidekick insect chum Roachy Caruthers, is out to solve a mysterious murder at the Nectarola soft drink headquarters. An insect going into a place like that sounds like a recipe for getting no work done to us. Let's hope the bug heroes aren't further side-tracked by a window, or a scattered line of salt.

The game is a blend of adventure and shoot-'em-up, with a complex plot to follow, too, and a new, fast-paced trailer has been released. In it there's all the jumping, strafing and shooting action you could want – and more than you might expect seeing as the main character is a tiny bug. Check it out: 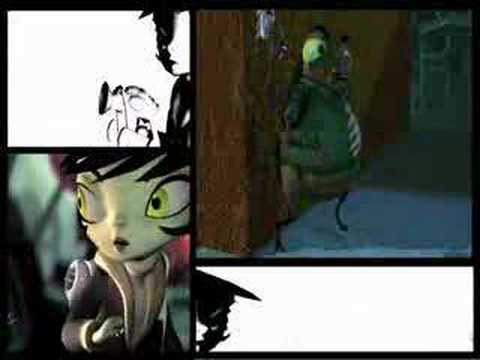 Like the look of it? Well, there's good news at the end of the trailer if you do. It looks like the game's been confirmed for release of January 8th 2008, which is considerably earlier than previously thought. Click 'Track It!' to be informed as soon as we review it early next year.

Next Up :
Fantasy Town, a farming sim, is launching next month on Android and iOS