It's no surprise that Chair and Epic have followed up last year's Infinity Blade with a straight sequel. After all, this is triple-A smartphone gaming, a mammoth project that stands head and shoulders above everything else in the App Store in terms of polish.

And whilst Infinity Blade II isn't as revolutionary as its forebear, it's fitting that this second bloodline has added some tweaks to the original's genetic make-up that move the series forward.

The game continues where its predecessor left off, with a tale of vengeance and slaughter in a stylised mediaeval fantasy world. The task at hand is a familiar one. Traverse the rooms of a tower, killing everything in your path, using the money that you find to buy more powerful weapons and equipment.

Eventually, you'll come across a boss character who's far too strong for you, and after a meagre attempt at defeating them, you'll be killed. Thanks to a quirk of the narrative, you'll come back to the castle with the same gear you were wearing when you died. You'll battle through to the same point, gaining XP and becoming tougher as you do, so that this time you won't be such a push over.

There's a stronger emphasis on story here, and more than a single chief antagonist, but the bare bones of the game remain the same. You explore the castle, tapping on blue circles on the screen to move around, until you're confronted by something that wants to kill you.

Foes range from brutish, club-wielding ogres to armour-plated knights and lithe, dual weapon-wielding acrobats. The Unreal Engine that powers the game renders these enemies in disgusting detail, and makes combat a real spectacle.

Fights are controlled with a fluid range of swipes and taps, and are all about timing and pattern recognition. You can dodge oncoming blows, block them with your shield, or parry them with your sword.

Once you've broken your enemy's advance, you're free to let rip with a series of scything blows, all controlled by finger swipes. The original's magic system remains intact, requiring you to draw symbols on the screen to unleash your powers.

You have three types of weapon at your disposal - heavy, dual, and the sword and shield combo from the first game. Each of these has its own distinct play style. Heavy weapons are slow but pack a punch, whereas dual weapons are all about speedy attacks and massive combos.

Infinite blades, and clubs, too

Chair has added a new sense of scale to proceedings, with a bigger castle to explore and a storyline that tries to add some heart to your constant butchery. At times it works, but in a strange way the new additions pale against the epic, generational sweep of the smaller first game.

Where Infinity Blade II trumps the original is with its new combat flavours. Mastering the three distinct crafts is a real joy, and keeps the game's inherent repetitive nature at bay for far longer. Battles feel more nuanced and intuitive, and victories all the more satisfying.

Throw in crystals that augment your equipment, a wider range of enemies, and a graphical flare that's still impressive, and you're left with an incremental update that undeniably raises the bar, but by less than you might have hoped. 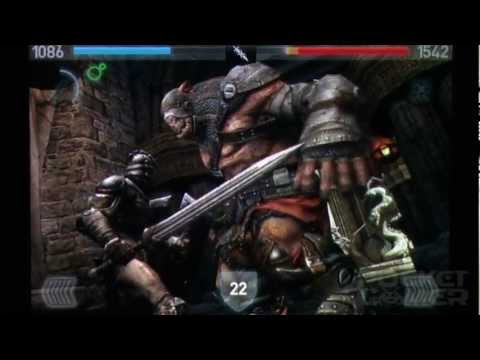 A brutal, cyclical action-RPG that builds on the foundations of its predecessor, Infinity Blade II is a showcase for everything that's right about sequels, but it's not the big leap forward that some might have been hoping for
Next Up :
Catalyst Black review - "Gorgeous visuals, smooth gameplay and fun-filled fights"