Her Majesty's Spiffing, as you can probably tell from the name, is a very British point and click adventure. It's already been out on PCs and consoles for a while, but now it's made the leap to the smaller screens of mobile.

And it's come over pretty much intact. It might be a little fiddlier to control things with taps and presses, but the touchscreen implementation here is actually pretty solid.

But that also means that some of the problems with the original game have been ported over too. If anything though, they're less glaring on mobile than they were elsewhere.

The game is a satirical sci-fi that sees you piloting a ship of exploration into deep space. It's all post Brexit satire, cheeky winks, and stuff upper lips. And it works pretty damn well for the most part.

It's knowing in the best sort of ways, and while there are some lines of dialogue that fall a bit flat, there's a charm to everything here that makes the game hard to dislike. 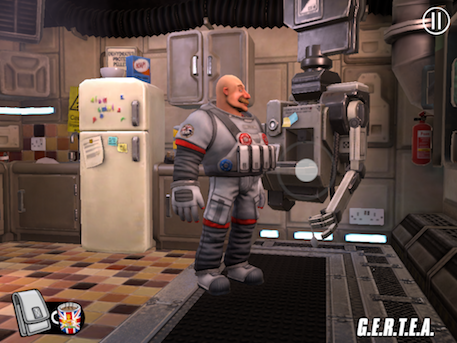 The controls aren't too sticky either. You can tap to move, or push on the screen to bring up a floating joystick. Items that you can interact with are highlighted with a grey circle.

Tap on the circle and you'll bring up an options wheel that tells you what you can do. Just tap again to select the action you want to take. There's a simple inventory system as well, which keeps things streamlined.

The game is fully voiced, but you can turn subtitles on and off if you're playing somewhere where you don't want loud voices blaring out of your device.

All in all everything is put together pretty darn well. The game is resource heavy, but on the flip side of that it looks pretty darn sharp. I wouldn't try playing it on anything slower than an iPad Air though. 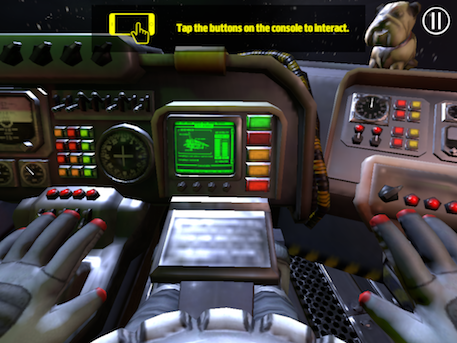 There's not a huge amount to do here, and you'll bash through most of it in a few hours. While that was a problem for some on consoles, for a £3.99 mobile game, it's not too shabby really.

Especially when it's one with so much heart and good humour as this one. It mixes its modern sensibilities with the point-and-click attitude of days of yore. And it does it pretty darn well.

If you've not played Her Majesty's Spiffing before, then this is definitely well worth picking up. It's bright and brash and silly in all of the right ways.

But if you've already smashed through the game on another device, well unless you're a super fan there's not that much point picking it up all over again.

A shiny point and click adventure with a heart of gold that works pretty darn well on mobile
Next Up :
UFO99 review - "A fun little arcade game on the go"

Charming adventure game Her Majesty's Spiffing is discounted to £1.99 / $1.99 in first sale

[Update] The satirical point-and-click adventure, Her Majesty's SPIFFING, arrives on iPhone and iPad

Kickstart this: Space adventure Her Majesty's SPIFFING aims its comedy at British patriotism