Hellraid: The Escape is a dark and dingy puzzler, made by Shortbreak Studios to celebrate the upcoming Techland game, Hellraid.

While that next-gen game is a co-op slash-em-up, this is a more cerebral affair, with The Room-style puzzles littered throughout dungeons and torture chambers.

It can be tricky. So if you get stuck, consult this guide to find out exactly how to get through, and get out.

Oh, and in this guide we'll use the word "focus" a lot. That simply means to double tap on a section that is sparkling with gold to zoom in, so you can manipulate the environment. 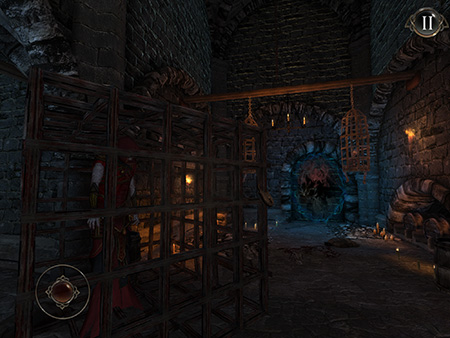 This is the final chamber for the main game and, like every good game, it ends on a boss fight. Don't worry, you'll still have to use your noggin. To start, enter the portal behind the cage. 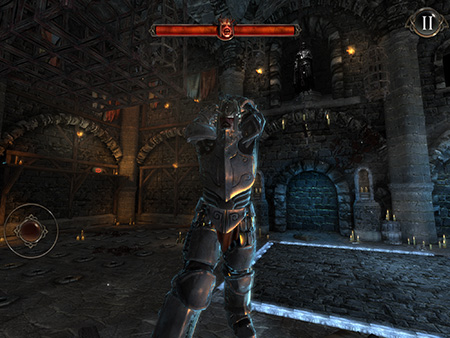 Your next step is to let the Blinded kill you. I know, it sounds crazy. But that's the way it's gotta be. 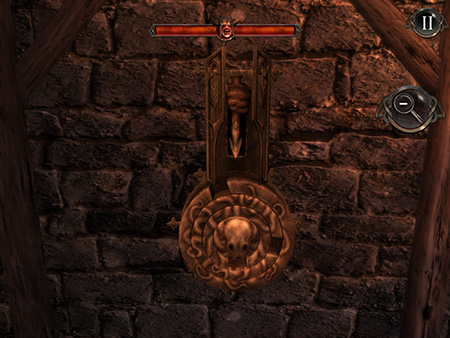 When you emerge from the new coffin, you'll have to solve this nuisance puzzle again. As before, slowly drag the arrow down so it slots into each gap, one rotating disc after another. Do it right and the nearby chest will open. 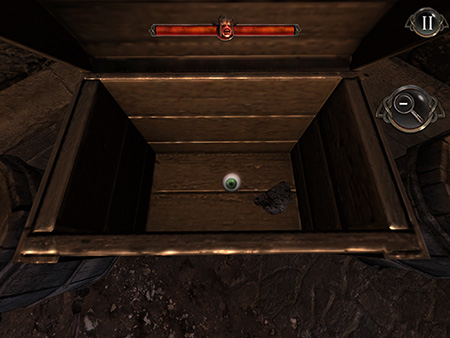 Open the chest to get your magic eye back. 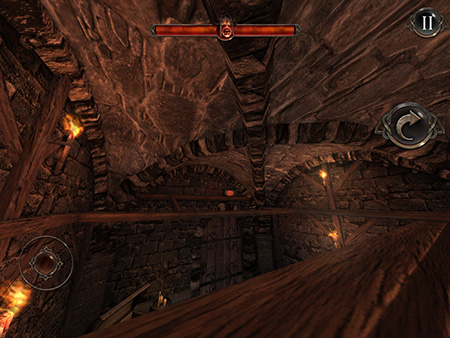 Throw the eye on the floor and start rolling around. Go up the ramp at the back of this room and then navigate along the planks until you get to the red eye symbol. Push it to open the door. 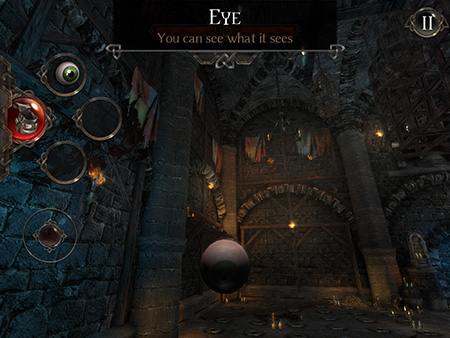 Use the portal to go back to the main room and lure the Blinded fella to the wall with the windows. Then run back to the place with the spikes on the floor.

Take out your magic eye and throw it on the shelf up high. Wait for the Blinded to walk over the spike holes and then push the red button to stab the monster.

You will also die, but you know what they say. When you want to make an omelette… 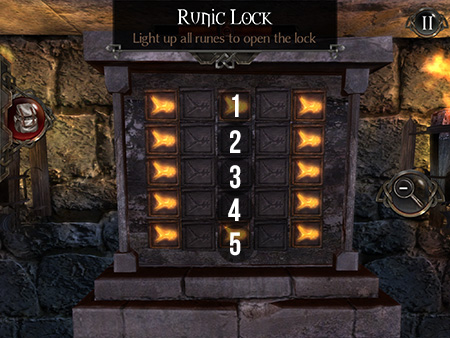 You'll wake up in another crypt, in another room. Look at the runic lock on the wall and then tap the tiles as shown in the image above. If you fluff it up, press the magnifying glass to back out and reset the puzzle.

Get it right and you'll be able to take the mirror from the alcove above. 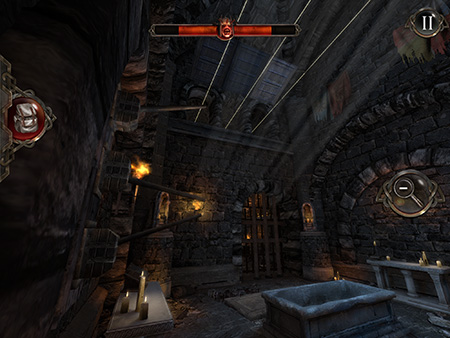 As you're looking towards the locked door, focus on the three levers on the left side of the room. Move them so they look like the image above (top lever pointing up, middle pointing down, bottom pointing up). 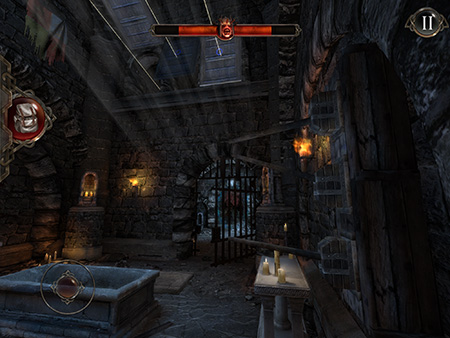 Now move the levers on the right side of the room, too. (That's top pointing down, middle pointing up, and bottom pointing up). 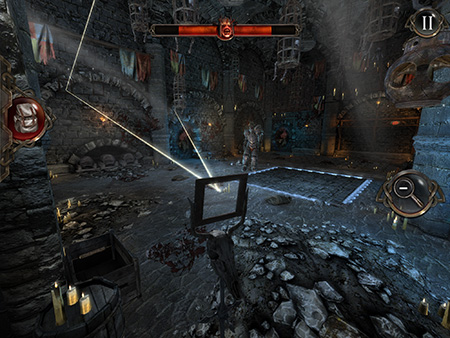 Go through the portal back to the Blinded's lair. Focus on the mirror stand to use your mirror on it. Then move your iOS device so the light beam hits the Blinded to reduce its health significantly. Then allow yourself to get killed. Again. 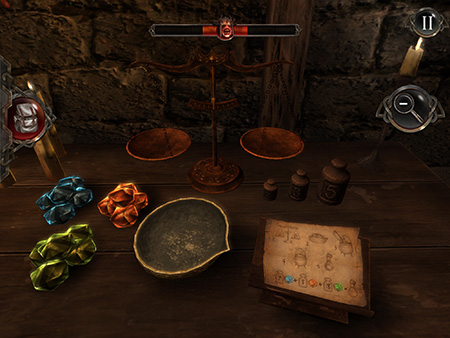 In this new crypt, head to the alchemy stand and make the potion as shown on the chart. That means you need one blue gem, two orange gems, and three green gems. 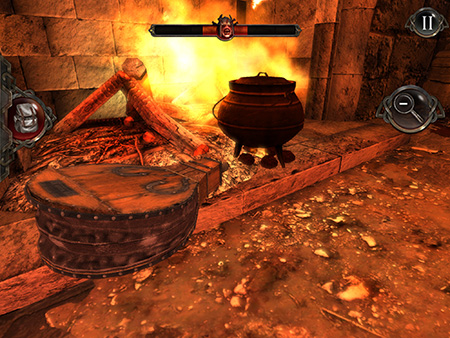 Place the ingredients in the pot by the fireplace and then use the bellows to brew the potion. Take the growth potion and drink it. 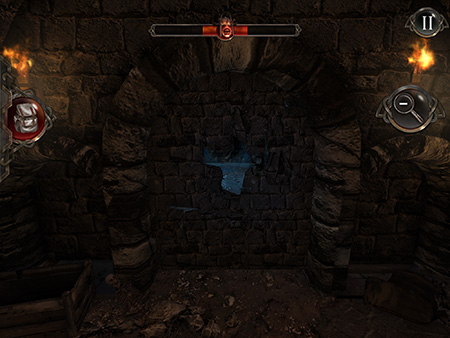 You can now break down the wall at the end of this room. Smash a big hole in it, walk through, and enter the portal to return to the boss room. One more attack should do it. 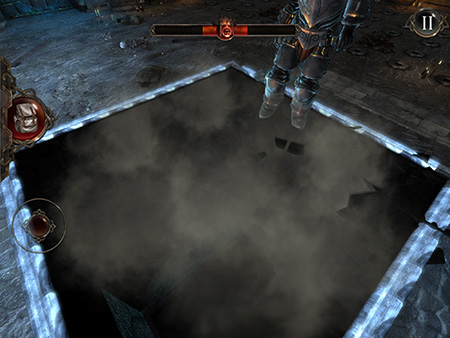 Lead the Blinded to the broken floor tiles in the middle of the lair. When you're both stood on it you'll fall. If you mess it up, you'll need to make a new growth potion. 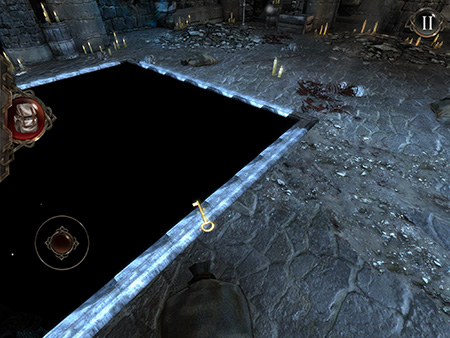 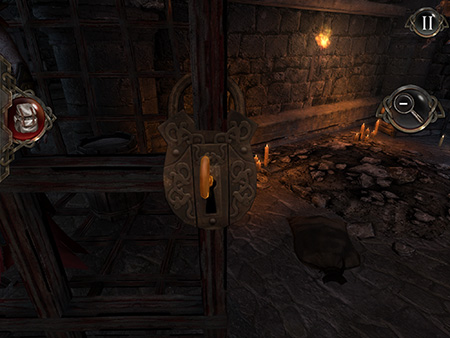 Put the key in the lock and turn it counter clockwise to finish the game. To be continued, dot dot dot.

Pay what you want for Hellraid, Worms 3, Twisty Hollow, and more

Hellraid: The Escape has dragged its blood splattered, puzzle-solving carcass onto Android

Try to escape this trailer for the Android version