Unbelievable as it may sound, Pocket Gamer Towers isn't always a place of harmony and unanimous agreement when it comes to opinions about games. Hector Ep1 split the office in two when it hit the App Store last year. We all agreed that the humour was great, but we were divided over the quality of the puzzles. Some of us thought they were too random, while others thought they made sense.

For the benefit of its detractors, Hector: Ep2 - Senseless Acts of Justice manages to smooth out the wrinkles of the first game, and it does it with style.

With a in-built hints and walkthrough option designed to help (and simultaneously mock) newcomers, both camps should now be able to sit back and enjoy the dark, lewd, and often very crude humour and ridiculously silly plot unhindered.

The game picks up directly after the first episode, with Hector staring down the barrel of a sniper rifle, armed only with a pizza box containing the final slice of pizza.

What follows next is a brilliant example of how well Straandlooper has gotten to grips with the genre in the last year, with a tutorial that culminates in you throwing the final slice against the wall for no other reason than to demonstrate how to use inventory items (much to Hector’s annoyance).

This level of craft to the humour continues throughout the episode, with some great in-jokes littered around the game for the die-hards (“Murray?”), and some of the finest conversation-based antics you’ll find this side of Melee Island.

Not everything hits the sweet spot - the 19th century urchin in a fridge is overplayed, while some of Lambert’s lines are just too whiny for me.

But overall this episode backs up the surreal premise with some great new characters and hilarious exchanges that puts Telltale’s efforts in Tales of Monkey Island to shame.

If you're coming off the back of Telltale’s in-house games, the puzzles in Hector will be significantly harder than what you’re used to.

As the episode is about twice the length of a ‘normal’ release from the publisher, there are a lot more occasions where you have more than a couple of items on you at any one time, while the actual objects themselves vary wildly from normal (like ropes and matches), to fairly insane.

Thankfully, the new hints system that can be expanded out into a complete walkthrough means no-one’s going to get stuck, although I echo the game’s suggestion that you should only really resort to it when you’re absolutely stumped, lest you miss out on some good lines.

Not everything hits the spot this second time around, however.

The controls - one tap to examine, two to use - still make it a little too easy to miss out items on the screen, while the unskippable nature of the ‘that doesn’t work’ lines means Hector can (and will) annoy after the umpteenth wrong combination, especially as they mainly involve him insulting you in creative ways.

The brash and grossly dark humour will likely rub a lot of people up the wrong way, too. So if you find the idea of creating a pipe bomb by filling a blocked toilet pipe with hairspray in order to cause an explosion that covers a character in excrement offensive, you might want to skip this series.

However, those looking for an adventure game that actually has puzzles, and backs these up with a strong script, great characters, and some fantastic animations, I’d recommend you slam your fist down and acquire Hector immediately. 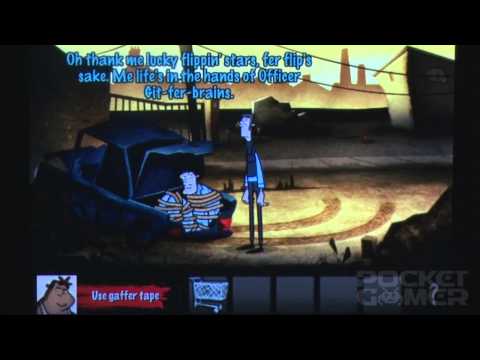 Hector: Ep2 is more welcoming for newcomers, without losing the sharp wit, funny jokes, and tough puzzles that marked it out in the first place
Next Up :
Roller Drama review: "Scheme with your team, skate great"

Hector: Badge of Carnage Episode 2 finished and coming to iOS this Autumn