If you're going to make a puzzle game that stars any sort of furry animal, features physics as an important part of the gameplay, and involves blowing up structures, you're going to have to make it stand out.

And so it is with Hank Hazard, from Chillingo and Red Rocket Games. It's not the most original premise, and it's not delivered in a particularly original way, but it's confident enough to add its own spin to familiar proceedings.

You play as stunt hamster Hank, staggering through 90 levels of danger, tumbling, death-defying leaps, and physics-based brain benders as you retrace the steps of his illustrious career.

There are different manipulable objects in each level, from platforms that disappear to bombs that explode and jack-in-a-box boxing gloves that propel Hank onwards, all of which are controlled with a single tap.

It's your job to lead Hank from his starting place to the big red and white target located somewhere in the level. If there's nothing in his way, he'll roll quite happily, usually into some terrible obstacle that will kill him instantly.

As well as making sure your hamster doesn't meet an untimely death, you can collect up to three stars on each level, and you're going to need to grab all of them if you want to get the highest scores.

Each level has a challenge as well, usually involving performing part of its physics-based puzzle remarkably well, but you'll only get the bonus score if you collect all three stars as well. Then there are the treasure coins, hidden in hard-to-reach places, which unlock extra levels for you to enjoy.

Things start off sedately, but pretty soon you'll need to be planning each move carefully, making sure Hank dodges the fire pits and spikes, leaps the yawning chasm, and then rolls back down the slope to land perfectly on the target.

Do try this at home

Once the game ramps up the difficulty, you'll be controlling multiple items at once, guiding Hank carefully through a plethora of deadly hazards and cunningly placed jumps and pitfalls.

What really shines through is the level design. Each stretch you have to navigate has been carefully constructed, with consideration paid to every possible angle of approach. While some levels are easy to complete, collecting the three stars and the bonus becomes an intricate balancing act of risk and reward.

Everything about Hank Hazard feels comfortable and assured. You're always sure which way Hank is going to roll, always confident that when you tap an object it's going to do what it's supposed to do.

It might not be the most original game on the App Store, but it has an addictive charm that makes it hard to resist, and some brilliant design that makes it difficult to put down. 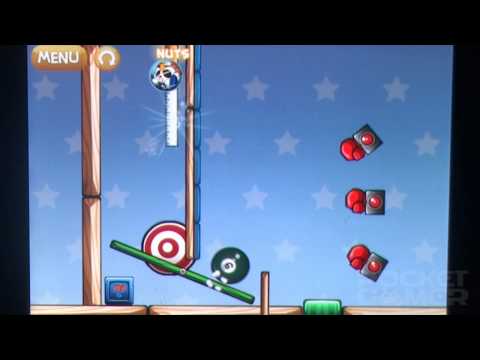 Whilst it might be another physics endowed puzzler with an anthropomorphic cast, Hank Hazard manages to lift itself above the anonymous crowd with some great design and a lot of fun
Next Up :
Star Discord review - "Needs polish, but it's shaping up to be a true RTS on the go"

Hank wants to be the world's first stunt hamster