Having built a name for itself on the back of the visually stunning space-shooter series Galaxy on Fire, developer Fishlabs has decided to try something a little different for the next instalment in the franchise.

"The background story, the design, and the factions are all there. But we thought it would be nice to reach out to players who wanted a game that's a little more slow paced." 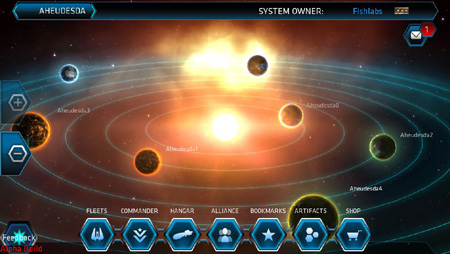 In contrast to its dogfight-heavy predecessors, Galaxy on Fire - Alliances is as much about construction as it is destruction.

For example, to produce enough carriers and chips to effectively defend your planets (and lay waste to others) you'll need to effectively manage a shipyard. This means deciding when to bolster your fleets with extra fighters, and when to focus on more domestic concerns like moving resources between planets.

Of course, the more you attempt to grow your intergalactic empire, the more resistance you'll face. While your home solar system (allied with either the Terran Federation, the Vossk Empire, or the Nivelian Republic) is a no-fly zone for would-be conquerors, any planets beyond that system are fair game for hostile invaders.

Before you start sticking flags in valueless balls of rock, however, you will want to find out whether a planet is worth claiming or not.

Tapping on a celestial body within your home system will bring up a healthy chunk of info detailing everything from the planet's owner and surface conditions to its mineral wealth. 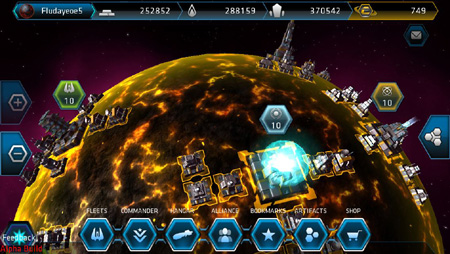 If you want to find out what lies beyond your own system you'll need to fire off some drones. These will send back stats regarding the composition and resources of nearby planets. The more probes you fire, the more accurate and reliable the information you receive will be.

As you must also rely on your drones to tell you how many enemy ships are lurking about, it pays to ensure your intel is good. There's a catch, however: the more drones you send out, the more likely you are to be detected by hostile forces.

It's also wise to make sure that the planet doesn't already belong to one of your allies. Handily, you can monitor the diplomatic situation by consulting your Alliance Map.

As well as providing a useful colour-coded chart of your friends and foes, the map lets you manage alliance members and invites. 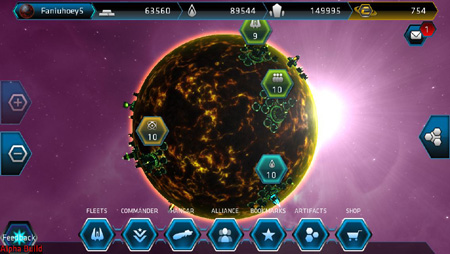 The map also keeps track of active conflicts, and shows you when backup is nearby - a valuable tool when the United Federation of Bastards decides to rock up unannounced and turn your picturesque retirement planet into a mining colony.

With the game still in beta, it's difficult to anticipate how strong the uptake for Galaxy on Fire - Alliances will be. Fishlabs is currently reporting around 1,000 sign-ups per day via ads in Galaxy on Fire and Galaxy on Fire 2, and is hoping to have around 200,000 active players by the end of the year.

If everything goes according to plan, you'll be able to download the finished product on iOS in November. The Android version will be along at some point after that.

Galaxy on Fire - Alliances, the strategy builder set in deepest space, is now available on Android