What does the new PSP Go! mean for gamers?

I was chatting with the designer of the classic, rubber-keyed ZX Spectrum’s casing Rick Dickinson once (who also put together the stylish housing for the ill-fated Gizmondo) and for him, the pinnacle of modern game design was the PSP.

He and his engineering colleagues were apparently blown away by Sony’s simple yet ultra-sleek and functional console design - more so than with the DS or any other hardware on the market.

And it’s easy to see why. Essentially it’s a big handheld screen, and that’s the single most important aspect of a portable system. But it had so much more hidden behind that wonderful screen, making it a beautifully realised handheld console - and there really haven’t been that many portable systems that can call themselves a full-on console as the PSP does.

I wonder what Rick thinks of the new PSP Go, then? Right now, all any of us have seen of it are a few leaked photos, and from a tragic technophile’s perspective it’s hotter than Grace Park covered in chilli powder. But what does it mean to the hardcore gamer? 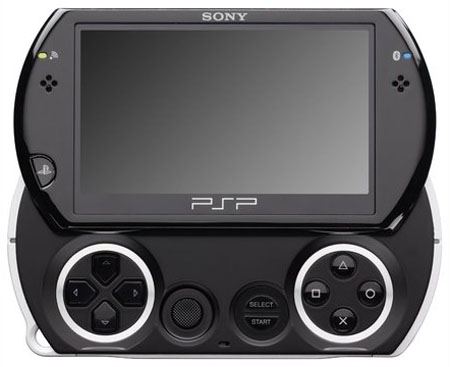 Admittedly, tech specs are sparse at the moment, but that’s not because Sony is keeping them secret. The case redesign, with the sliding screen to hide the controls, is what really makes this a ‘new’ PSP.

There’s also the addition of Bluetooth, which should help enormously with all kinds of connectivity, as will the undoubted addition of the speedier wi-fi standard.

But it seems that for every addition the PSP Go! is to enjoy, something else has been taken away. Will we miss UMD? Yes, of course we will - all our expensive bloody PSP games are currently on disk, so we won’t simply be upgrading a console here. We’re apparently expected to put down our old PSP habit and buy into a whole new epoch of Sony handheld gaming.

And the screen could slide into an alternate dimension, but it’d still be smaller than the current PSP’s at 3.8 inches (compared to the impressive 4.3 inches existing PSP owners enjoy), which is one of the device’s most attractive and necessary features. 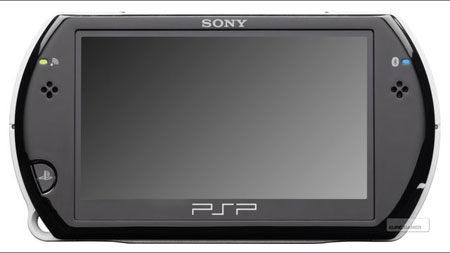 The PSP Go! is to be a remarkably similar size to the iPhone when closed, which boasts a 3.5 inch screen, and the omission of a touch sensitive display points out another aspect that could hold the remodelled console back.

It’s becoming quite clear that this isn’t the PSP 2. To be fair to Sony, it’s never said it was, but other than the addition of Bluetooth, which will presumably make things easier for developers to add local multiplayer to games, there’s nothing here to suggest there’s going to be any specific or enhanced PSP Go! software.

Well, other than the fact that none of your existing PSP games are going to be compatible, unless Sony - or some charitable Chinese electronics company, perhaps - is to provide a way to transfer your hard copies into its 16GB of memory. 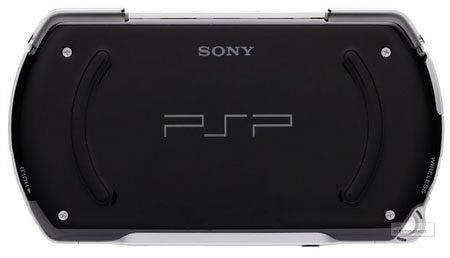 By the end of E3 we could well have a price point for the PSP Go, since Sony is talking about launching the system in the Autumn, and putting it on the shelves right next to the PSP 3000.

But is there room for two identical consoles with incompatible games? That really depends on Sony’s next move. If this actually turns out to be a budget range PSP - and we’re talking sub £80 - then it could become a stroke of marketing genius that launches Sony to the forefront of digitally distributed entertainment.

The success of the PSP Go! in this arena (the most important area of the games industry right now) could quickly and easily spread to sell the PS3 as well, should the PlayStation Network become the next iTunes.

But if Sony pits the Go! directly against the PSP at, or around, the ton and a half price range, gamers are going to be asking themselves some serious questions about which Sony console to buy.

Let’s say, for the moment, that the PSP Go! is the winning choice in these internal consumer dilemmas. How long before the poor sales of the PSP 3000 causes a price drop, and begins to make the system look quite appealing all over again - especially considering the naturally falling prices of old UMD based games?

This has a very similar taste to the battles we’ve seen between the PS3 and PS2, with the older console still performing admirably against its supposed replacement. 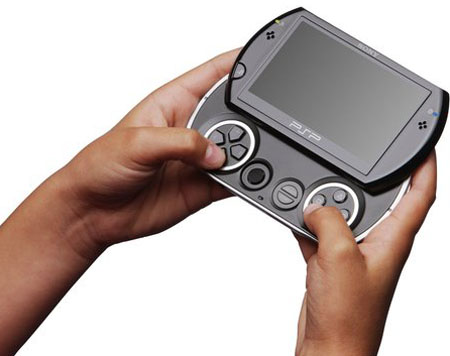 Right now, I’m as seduced as anyone by those pictures of the PSP Go!, but it’s damn difficult to see quite where Sony is going with this system. It’s not as though the old PSP can’t handle exactly the same download content as the new one, so it’s hard to work out why - given the casual abandonment of the system’s prolific back catalogue - Sony didn’t make this a next generation console, rather than a stop gap solution to the massive challenge thrown up by the iPhone.

It seems the PSP might indeed go - into obscurity.

Will you chuck out all your old PSP games and buy one of these, rather than playing the downloaded games on your old system? What’s the maximum price you’d pay for a sexy, yet reduced-function console?

If you’ve any questions for Sony regarding the PSP Go!, put them in here and we’ll do our best to get them answered at E3.