The best digital comics for your PSP

Sony's handheld has a dark and geeky secret

The PSP is the multi-talented member of the handheld family. It's as if when it's not captaining the football team and getting straight As, it's walking around on its hands playing the nose flute and reciting James Joyce's Ulysses backwards from memory.

But this outwardly showy hardware harbours a dark and geeky secret. The PSP is a closet comic fiend, devouring page after page of speech bubbled frames, savouring every luridly coloured image with its huge high resolution cycloptic eye.

Given our well-established love of geeky pursuits here at Pocket Gamer, we have decided it's high time we outed the PSP as the gift to comic lovers it really is, with a run down of the best PSP comics out there. But before we do, a quick guide on how to transfer comics to your PSP.


1. For each of the links we provide, download the .zip file for the comics you want to read. 2. Connect your PSP to your computer via USB and navigate through the PSP folder to the Photo folder. 3. Create new folders where you want each individual comic to be stored and name them accordingly. (Don't create comic folders and then episode sub-folders, as your PSP can only go one folder deep in the XMB). 4. Open the .zip file and highlight all of the image files. 5. Drag the files across to the relevant folder. 6. Disconnect your PSP, sit back, and enjoy your comic.

But which comics? Here, in no particular order, are the titles that have caused deadlines to be missed and lunchtimes to vaporize at Pocket Gamer headquarters. Super Spy

The multiple Harvey and Eisner nominated artist, Matt Kindt, is responsible for the fantastic Super Spy series of comics and the graphic novel 2 Sisters.

Top Shelf Productions has a selection of his 50 comics in PSP friendly format, featuring standalone short stories based on some of the characters in 2 Sisters. All of them are free, and make for a fascinating introduction to the Super Spy universe.

And that universe, strangely, is our own, as Matt Kindt has a sense of human adventure often absent in the world of comics. There is no element of high fantasy here and the World War II backdrop aides in Kindt's exploration of love, loss and the knowing of oneself. Never shying from complex and emotional themes, Kindt's tales are gripping, relevant and ultimately believable.

The washed out, sketchy art style gives the feeling of flicking through the frames of an old black and white film, and yet Super Spy manages to flirt with high brow comic book stylings without ever succumbing to pretentiousness. Highly recommended and an ideal entry point for those put off by superheroes, goblins and cyberpunks.

Brothers Paco and Chad Allen are probably a bit fed up with comparisons to Frank Miller's Sin City. Despite an art style that admittedly echoes some of the comic legend's output, such comparisons are lazy; NYC 2123 has more ideas of its own packed into its six freely available episodes than Frank 'Chicks with Guns' Miller can lay claim to in his entire bibliography.

A made-for-PSP graphic novel, NYC 2123 takes a standard future dystopia backdrop, and weaves a sharp sci-fi tale of organised crime throughout it. Featuring a mixture of characters that would fit easily into a Quentin Tarantino movie, NYC 2123 often owes more to cinema than it does to comics.

The story is illustrated using a variety of digital sampling and re-mixing techniques where each frame is a digital composite of photos taken of actors and background scenes. The style bleeds a cinematic quality into the story, so that by the time you get to the end of the sixth and final episode you'll be desperate for more of its high octane cyberpunk thrills.

Creating a cohesive universe within such strict boundaries is no mean feet, but the Allen brothers have made it look easy in their cyberpunk masterwork; it's just a shame that there are no new episodes. Rumours of a film surfaced a while back but with nothing announced in nearly a year since, things look doubtful on that front. Don't be surprised to find yourself re-reading this gem.

The premise of Agent HITLESS is nothing to get too excited about: Super powered vigilanties on the run from the evil corporations that gave them their super powers are bread and butter in the world of comics.

But even an unoriginal story told well can do much more than hold its own, and Agent HITLESS proves to be an entertaining frame flicker despite its humdrum plot. Drip feeding information and utilizing the show-don't-tell dynamic of the comic format to deft effect, Agent HITLESS is predictable yet gripping at once.

The two free episodes of the made-for-PSP comic released so far (though there is support for other handheld devices, too) showcase a visual style that less seasoned comic fans will be much more instantly familiar with. The site that accompanies the comic is also very slick, and features wallpapers and streaming soundtrack (which is available on iTunes).

The comic's creator, Nicholas Da Silva, is also the author of Flash Filmmaking 101, which explains why the Agent HITLESS website is such a joy to behold. We expect great things from Da Silva in the future and in the meantime the first two episodes of Agent HITLESS are a good indication of what is to come.

Unfortunately this title is not free, but even at more than £10 on Amazon, the Metal Gear Solid Digital Graphic Novel is worth every penny and is a showcase for the PSP's digital comic potential.

Using the PSP's strengths to drive the graphic novel medium forward, this production is much more than a series of static frames and includes a mixture of stylised images, animations, a soundtrack and sound effects. Anyone who has ever bought a Metal Gear Solid game will no doubt have noted the fantastic artwork on the cover and this offering adopts a similar style.

The plot is essentially an on-rails re-tread (or re-tip toe) of the first Metal Gear Solid game, with set pieces such as the battle against Psycho Mantis lovingly recreated as well as plenty more espionage action packed into its 270 odd frames.

But the plot ultimately plays second fiddle to what is a visual feast, incorporating mild interaction to reveal incidental details that shout Hideo Kojima (Metal Gear Solid's creator) from every pen stroke.

Not as friendly on the wallet as the rest of this list, but a great purchase for die hard fans and something a bit different for already certified comic fanatics. Konami, if you are listening, make this into a series and make it available as a download rather than an expensive UMD. 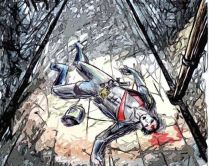 It would be unfair not to mention Darren Reid in our PSP comic round-up. Though not strictly a comic author, Daren Reid's contribution to free PSP (and DS) reading is considerable.

His graphic novel, Xevicom Forever, is a straightforward tale of revenge in a future world where right is difficult to tell apart from wrong. Drawn with scratchy slightly frantic lines and a flesh a bone palate of blood reds and harsh bleached whites with the occasional blue or purple vein of cold colour separating them, the characters and backdrops of Xevicom Forever are the story the comic has to tell. Ending on a classic cliff-hanger, Xevicom is a tease.

Hopefully, once Reid has put the finishing touches to his fascinating sounding massively multiplayer interactive story, The Half Broken Crown, he will get around to penning some new episodes of Xevicom Forever. In the meantime, Reid's novels such as The Genesis of the Shadow (also freely available from his site) are well worth a look.

That, in our opinion is the best lot of PSP comics out there, but there are some other great collections that are certainly worth a look. 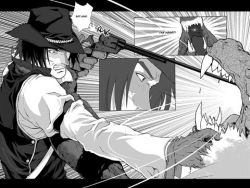 Manga fans would do well to pay gomanga a visit, which has the introductory episode for seven of its different titles available in PSP format for free download. Titles such as No Man's Land and Last Hope stand out in the content stakes, but fall down slightly due to not being optimised perfectly for the PSP, meaning some frames need to be rotated in order to be readable.

The pick of the bunch here is definitely The Universal Intergalactic Discovery Company Ltd, which hosts a menagerie of creatures left over from Douglas Adams' lunch box and a sense of humour to match. The U.I.D.C. would have warranted an inclusion in the main list were the .zip files not badly organized (some of the frames need to be re-ordered before they make sense) and also prone to needing rotated occasionally.

Despite all these great digital comics and the suitability of the hardware, the PSP comic scene dropped off sharply towards the middle of last year after an initial flurry of activity. Considering the high quality of output the PSP has seen so far, it'd be great to see a resurgence of activity.

Time to pick up those sketchbooks again budding artists!

Be sure to let us know which of the comics in our list you enjoyed the most on our forum, and if there is anything that we missed that really deserved to make the cut, drop us a line so that we can feature it in our Friday Freebie.