Stateside: Ouya talks a good game, but is it making it up as it goes along?

Chicago-based Carter Dotson is a senior writer at 148Apps.com, which was recently acquired by PocketGamer.biz publisher Steel Media.

"If I can give Ouyas away for free, I will."

That was what Julie Uhrman, founder of Ouya, said during a session at IGDA Chicago on 1 March.

Both Uhrman and content acquisition manager Bob Mills took part in a presentation and Q&A session that detailed Ouya's goals as it prepares to reach the hands of its Kickstarter backers.

The goal? To convince those in the audience to be optimistic about what the company is trying to do and the strength of the Ouya ecosystem. In short, it was a sales pitch to encourage companies to come on board. But did it work?

The 45-minute session served both as a brief introduction to the genesis of Ouya, as well as a guide to the firm's objectives for gamers and developers alike – from providing an open SDK, or 'ODK', and Unity plugins to stating Ouya's preference for open communication.

"I saw this product that was based on Android but wasn't a mobile device, and that was sort of where the light bulb came on," said Uhrman, of Ouya.

"And so I said, 'What about building an Android console for the television? Let's steal all the best ideas from all the other platforms and bring them to the TV.'" 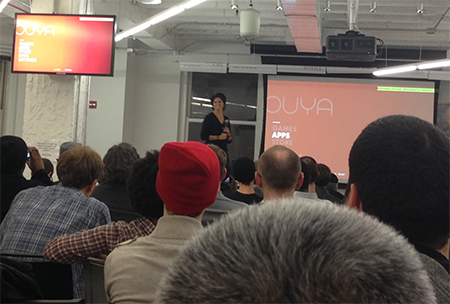 However, rather than stand and prophecise, Uhrman spent much of her time taking questions from the 140-strong crowd, with communication – especially of the open kind – the firm's signature.

According to Jared Steffes of Matador, who helped arrange the event, Ouya representatives were the ones who initially reached out to IGDA Chicago about meeting up with developers.

And, true to form, the firm's talk was unrestrained: Uhrman and co. were very forthcoming on details when asked and provided many frank and detailed answers to questions.

It's a trait that was highlighted when one developer inquired about piracy.

Uhrman responded, "We will be secure as any other Android devices." The crowd had a good laugh, before she provided qualifiers as to how they will attempt to tackle the problem as best as they can.

In reality, Ouya will not be the cure to the Android piracy ills, in part because of its openness.

One of the few moments where it felt like Uhrman was holding back was when a half-mention of sideloading emulators made it out of her mouth.

"Ouya's open. You guys can sideload content, you can sideload games, y'know, you can put up emul... I mean, there's a lot you can do that we're gonna allow," she quipped.

Otherwise, it felt like both Uhrman and Mills weren't trying to dodge anything, staying around to take questions one to one after their time on stage. 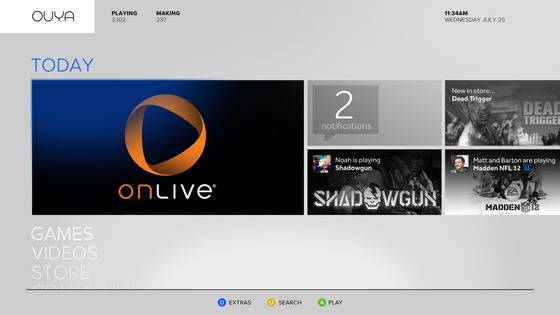 One such questioner, for instance, was treated to the news there there are plans for a promo code system, as well as prepaid cards to be made available when the system hits retail in June.

As developers will know, such a system was not available on Google Play for a long period of time, and the lack of promo codes for the press continues to be an issue with coverage. And the details didn't stop there.

While Uhrman stressed that Ouya will cater for the sideloading of content, she did stress that the plan was for Ouya's marketplace to be the only store preloaded on the device. Theoretically, nothing could stop Amazon or another vendor from having a sideloaded solution, but Ouya will only ship with its own store.

As well, there will be an approval process similar to the iOS App Store that will limit games based on some content restrictions as well as to ensure that the games work, but Ouya wants to provide an estimated approval turnaround time to developers who submit.

Up in the air

However, Ouya undoubtedly has a way to go before it becomes a finalised product.

For starters, the UI is still undergoing tweaks. The staff that arrived at the presentation brought what was still a demo unit in clear casing. They recently added a ~20 decibel fan to the system to take care of the heat. Indeed, even the controller is not finished.

On that score, Bob Mills planned to travel to Taiwan this week to test new D-pads for the controller after being unsatisfied with the feel of the previous design, which itself was a change from the original D-pad model. 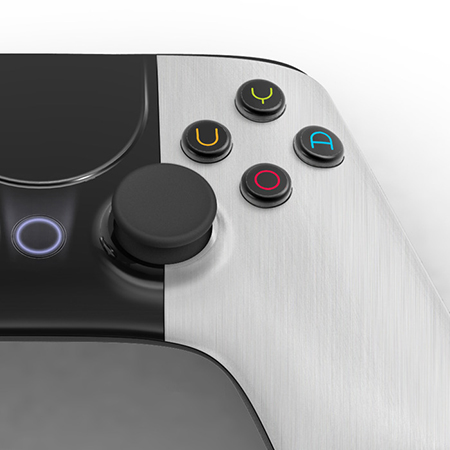 Kickstarter backers are still pencilled to start receiving their consoles at the end of March, but what appear to be major manufacturing decisions are still being made.

Nonetheless, Ouya was open about its plan to continue to iterate on the hardware in the two months after the initial Kickstarter backer model ships.

In fact, that was very much the theme of the night: Ouya seems to be entirely flexible on the one hand, but flying by the seat of its pants on the other.

Reasons to be cheerful

There was a definite feeling that Uhrman was making up answers to probing questions on the spot. When questioned about the possibility for subscriptions or for game bundles, Uhrman answered with an uncertain but optimistic "Yeah. Sure."

"The biggest piece of the ODK is the payment API. As long as you use the payment API, sure," he added, before joking that her positive answer without a set solution would be picked up by the press:

Indeed, the big takeaway from Ouya's talk was that the company talks a good game.

Uhrman left developers with plenty of reasons to feel optimistic about what the company is doing, but – in reality – there's much about Ouya that is yet to be set in stone.

For those looking for a fresh platform to disrupt the rest of the industry, Ouya is off to a good start and, while there are still plenty of reasons to wonder if it can be successful, the firm's public face gives plenty of reasons for its backers to be cheerful.