Hands-on: The 10 hottest new features of iOS 5 for iPhone and iPad

This autumn, Apple's army of touchscreen gadgets will get what is perhaps their biggest update yet. iOS 5, which will be made available for most iPad, iPhone, and iPod touch users, will introduce roughly 200 new features.

Sadly, we can't cover all 200. We'd be here forever telling you that you can now use the volume buttons to snap pictures, have an profile picture in Game Center, edit images in the Photos app, or have custom ringtones on iPhone.

But, we have been using iOS 5 on the iPad for two weeks now, and have chosen ten new features from the forthcoming update that we think are especially cool, and will transform your iPhone or iPad experience.

Remember: this is pre-release software we're using so functionality is subject to change before Apple officially releases iOS 5 to the public later this year. 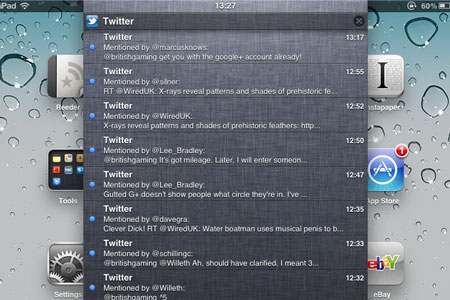 One of the biggest bugbears of the iOS experience is the notification pop-up. If you receive a tweet, a calendar alarm, or a Tiny Tower restocking alert, an annoying box springs onto the screen, obscures everything behind it, and demands your immediate attention.

With the new Notification Center in iOS 5, this hair-tugging frustration is as good as gone. You can now have notifications send an discreet banner to the top of the screen, and you can also pull down a list of older messages to see unread tweets, emails, and Farmville nags.

The notifications are also (uncharacteristically for iOS) customisable. You can keep the screen-stopping alerts if you want, but on an app-by-app basis. I have direct tweets and emails pop up an alert, while retweets (through Boxcar), game reminders, and eBay nudges all silently send unobtrusive banners. 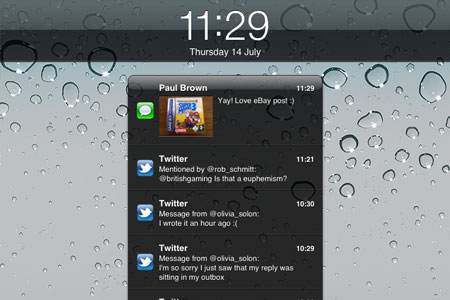 The joy of new notifications extends to your Lock screen, too. Instead of showing only the most recent message, iOS 5 presents an exhaustive, scrollable list of every app notification you've received since last using your iPhone or iPad.

They also sport the app icons which can be slid over to unlock the device and directly jump into that app.

The long overdue overhaul of notifications is definitely one of iOS 5's biggest triumphs, and brings Apple's fleet of touchscreen gadgets in line with a contemporary smartphone OS like Android. 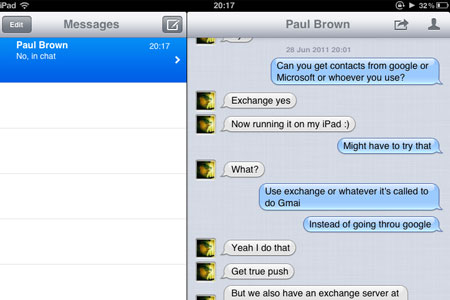 For iPod touch and iPad users, a curious green 'Messages' icon will appear upon installing iOS 5. This handy tool lets you share snippets of text and photos with other Apple acolytes. For iPhone users, the new functionality weaves seamlessly into your SMS app.

It's a bit like BlackBerry Messenger - the propriety chat app that can only be used between 'Berry users. It's perhaps not as powerful as using AIM or Skype chat through an app like IM+, but it's a handy, universal, and free way of conversing with other iOS users, no matter what services and apps they use. 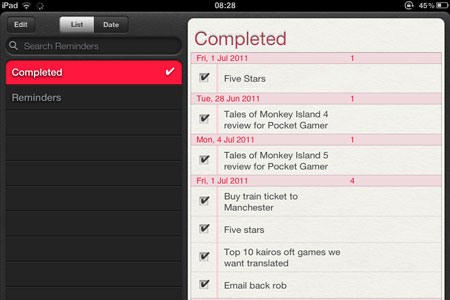 'Reminders' fulfills another purpose that is not exactly under-represented on the App Store - a quick hunt for "to-do" apps finds 1,400 iPhone downloads.

But Apple's own shopping list is well presented, hooks up with your iCloud backup, and has at least one cool feature: Location Reminders.

You can use your device's handy GPS chip to flag up reminders when you hit geo-tagged locations, so you can be nagged about putting the washing out the second you open your front door. Neat. 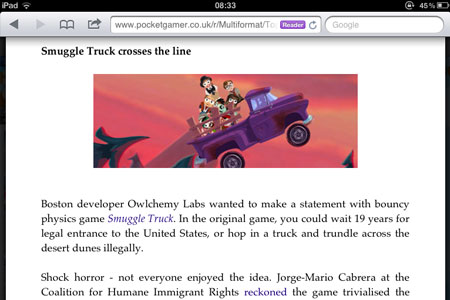 Apple's mobile web browser Safari has been give an overhaul. On the iPad, the pop-up parade of open websites is replaced by a more traditional, desktop-style tab experience. I think I prefer the more visual browsing style, but I do like the option to open tabs in the background.

Apple has also tried its hand at the Instapaper experience. Most websites now feature a 'Reader' button in the URL bar (in a similar way to Safari on Windows and Mac OS X), which strips the site of adverts and nuisance web design for a more clean and readable appearance.

Then there's 'Reading List', which is pretty much just like bookmarks, but it automatically removes the link from 'Unread' when you hit the bottom of the page. 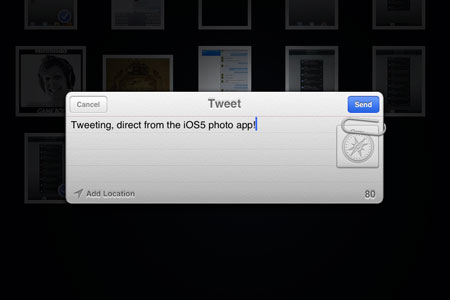 The latest build of iOS introduces native support for Twitter - the ADD-sufferer's preferred social network with that strict 140 character limit.

Now you can send a photo to your feed from the Photos app, or instantly recommend a web page from Safari. It even includes location-tagging, a directory of pals when you tap the '@' symbol, and a hashtag button. 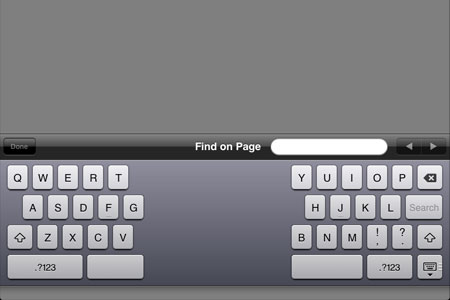 Every now and again, you'll need to tap out a message while holding up your iPad. You won't be particularly comfortable, you look like a Borrower who's found an iPhone, and you'll make more mistakes than ever.

To help fix this, Apple has introduced the split keyboard. Simply tap your thumbs to the screen and drag them apart to divide the keyboard into two letter islands. You can also move the keyboard up and down the screen to make it as comfortable and usable as possible.

I've already used this feature a lot, especially because it's so easy to switch between the two layouts. And fun. 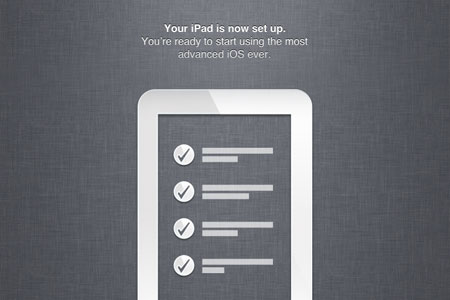 You no longer need to own a computer to set up the iPhone or iPad. The device won't cry out for iTunes - like a newborn baby demanding milk - upon first boot: instead, it will simply take you through a setup process, right there on the gadget.

After setting up your location and wi-fi password, you can log in to your Apple account and grab a device backup from iCloud if you have one. If not, you can start afresh or hook up to a PC and get your old data from iTunes, like a caveman.

Not everything is taken care of, sadly. Apple still doesn't provide support for managing podcast subscriptions on the go, so you'll need a PC to get your weekly dose of Pocket Gamer.

You can also sync to iTunes wirelessly, but you'll need to have your device on charge. Via a wire.

I might fiddle with words for a living, but I'm still a horrendous speller. That's why the new Dictionary, which is now bundled with almost every app on the device, is so cool.

Simply highlight a word and tap 'Define' to get more information. It works while reading Twitter, browsing Safari, or trawling your RSS feeds. 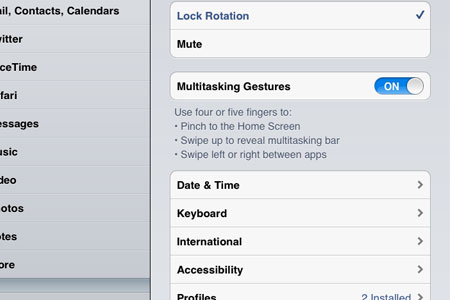 This one's just for iPad users, and right now it seems exclusive to those rocking the fancy schmancy iPad 2. The latest iOS includes system-wide gestures that let you flick through apps with your pinkies.

A good example is pressing all four digits against the screen and pinching them inwards to close an app and return to the Home screen.

You could also drag those fingers up to reveal the multitasking pane, or swipe them to the right to leap straight into your last-opened app. If you're a power user, this will be a massive timesaver.