Aloha, and welcome to Five Stars. Each week, we invade iTunes like Vikings warriors, pillage the App Store, and return with our five best spoils of war.

If that metaphor was lost on you, we look at all the new apps that came out in the last seven days and pick out our favourites. It's not rocket science.

Today, we've got another wallet-hating remake from Square Enix, a couple of addictive freebies, and two games about cutting - both in the rope and fish varieties.

A few games missed the top 5 spots by a hair this week: Hothead's child-kicking puzzler Kickin' Momma was usurped at the last minute, and DS port Touch Detective requires a little more investigation... 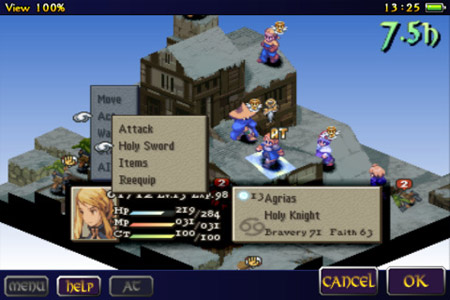 It's the game that costs more than the war in Iraq, can only be purchased in exchange for gold bullions, and could fix the United States economy with just two sales.

Unlike most games in the Final Fantasy back catalogue, Tactics features diorama battlefields where your cute warriors can leap about from tile to tile like a chessboard. It's more about unit placement than tired stat-swapping, and brain over brawn.

Being a Final Fantasy game, War of the Lions also packs a strong role-playing backbone (with a job system, an epic world map, and plenty of item shops) and a full-on storyline.

If you've already played the game in its million previous incarnations, the iPhone edition has effortless touch control, sped-up loading times, and newly remade cutscenes to tempt you in for another battle. 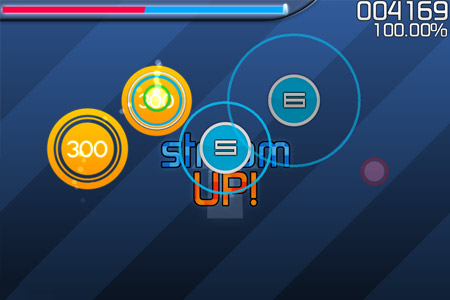 Some console games might never come to the iPhone, but a few hardy developers are committed to creating facsimiles in their stead. Osu! Stream is next in line, a cheeky clone of Nintendo DS screen-tapper Elite Beat Agents.

This free app slavishly recreates the DS game's circle-striking gameplay, as you tap musical balls once a shrinking circle envelops their perimeters.

There are also note highways to trace your finger along, frantic spinners that will likely wreck your touchscreen (or your finger), and, for once, a feature that the DS didn't have: multi-touch chords.

The iOS freebie might not have Elite Beat's twisted sense of humour or eclectic soundtrack, but its rhythmic gameplay makes it a welcome copy of the DS favourite. 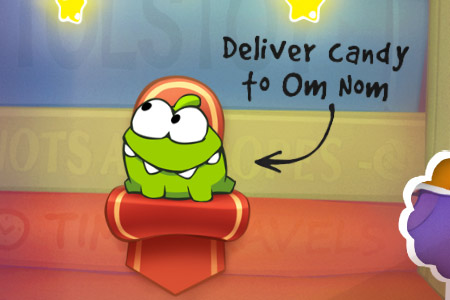 Experiments, ZeptoLab will be quick to tell you, isn't a sequel to 2010's smash-hit puzzler Cut the Rope. Instead, it allowed the Russian developer to try fresh ideas and experimental concepts in the world of Om Nom, without slapping a big '2' on it.

This semi-sequel, then, introduces The Professor, a curious boffin who decides to study the insatiable appetite of Cut the Rope's iconic green monster, and perform a series of wacky experiments on him.

What follows is this: 73 brand new stages for the physics-based puzzler (which is about delivering a dangling sweetie to a monster, mostly by slashing ropes and avoiding hazards), along with new ideas like suction cups and rope shooters. 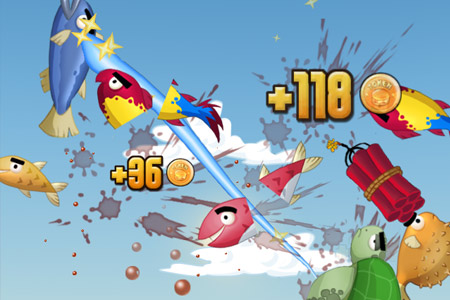 It should be noted that Ninja Fishing is, in fact, something of a rip-off of noted indie game Ridiculous Fishing (read more, here). The author was unaware of this when writing the following recommendation... Ninja Fishing is essentially two games in one. At first, it's a fishing game where you cast your lure into the briny deep and try to snatch guppies on the way back to the surface. You'll use the iPhone's tilt controls to guide the lure's path.

When they hit the surface, those kidnapped fishes are then lobbed into the air, and would-be samurai Otoro pulls out his katana. The game quickly morphs into an impromptu game of Fruit Ninja, as you swipe your finger over the screen and turn the water-dwelling critters into sushi, and tonight's dinner.

There are 20 different fish to catch, as well as hidden treasure chests and other undersea goodies. Your sushi and loot are then turned into cash, which can be spent on upgrading your angling (and killing) kit. 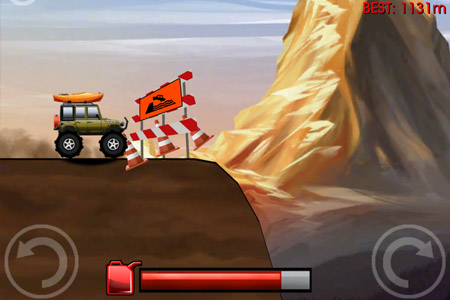 The iPhone is the king of time wasters. If you need something to occupy your nuerons during bus rides or bowel movements, the App Store is full of addictive little games that will satisfy your urges for a few minutes.

Extreme Road Trip is another one of these, a tasty physics-based driving game about navigating a bouncy, runaway car across mountainous terrain, and seeing how long you can survive before your gas runs out or you total your motor.

It has ingredients from some of the iPhone's most prestigious time sinks: the endless score-besting of Canabalt, the studious car-levelling of Snuggle Truck, and Tiny Wings's compulsive need to barrel into valleys and rocket back out of peaks.

Extreme Road Trip has at least one ace up its sleeve, though. By performing stunts (everything from smooth landings to multiple mid-air flips), you'll fill up your nitro meter and boost along. You don't use up gas when boosting, so you'll have to use stunts and tricks if you want to rule the game's leaderboards.