And an episode of confusion

At 10am I was supposed to see Ruin on the PS Vita in a small meeting room away from the clamour of the main hall, but Sony had wi-fi issues and after half an hour it sent the waiting journalists away. Luckily, PocketGamer.biz's Dan Griliopoulos saw it later in the day, so we'll be bringing you a write up.

30 minutes in the red, I headed to a meeting with Galaxy on Fire developer Fishlabs, but we couldn't find each other and eventually had to give up. (This is how I live my life – perpetually lost and confused.)

Then I went to Nintendo's giant booth to play on the 3DS games I didn't get to play for long enough on Tuesday – Mario Kart, Super Mario 3D, and Luigi's Mansion 2. I asked an exhibitor how I might get into the VIP 3DS area, and she pointed me in the direction of a raised area at the rear of the booth.

So the high-powered PR people let me through to the raised area at the back of the booth and explained to the guard at the bottom of the stairs that I was, despite appearances to the contrary, a very important person. I ascended the stairs, where I found lots of Wii U consoles, but no 3DS games.

It seems the request to play a 3DS game when there's a Wii U available is so egregious that the human brain automatically corrects it.

These are the droids you're looking for

The afternoon was a bit more productive. At the Unity stand I saw Silvertree Media's Sleepy Jack and Southend Interactive's Desert Winds running on Xperia Play. 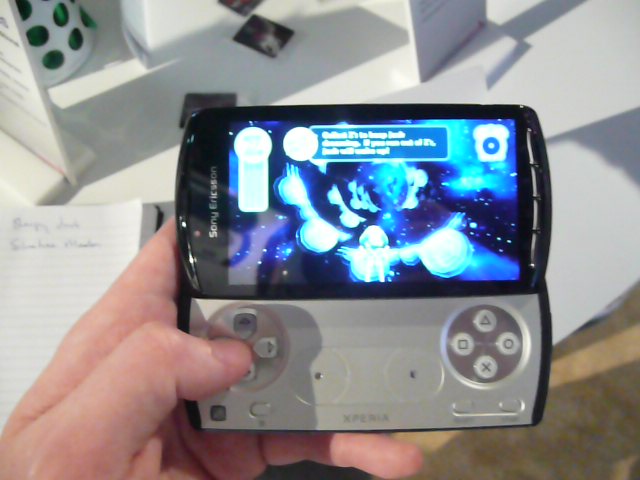 Sleepy Jack on an Xperia Play

Sleepy Jack involves flying into the screen through a dream state picking up 'Z's in order to stay asleep, and shooting monsters. It looks great – Silvertree's previous Android game was the acclaimed platformer Cordy – and the gameplay is shaping up to be tight and arcadey. For reference, think ilomilo crossed with DoDonPachi Resurrection.

Desert Winds is less promosing. Essentially a tech demo for Qualcomm's Adreno 220 GPU, it has stunning graphics running at 60fps, but relatively little gameplay to speak of at this stage in its development.

There are currently three consecutive levels, in which you make your way towards the lair of a giant scorpion monster thing called Alacran and then kill it.

Qualcomm has compared it to Prince of Persia and God of War, but it's much simpler than either of those. In fact, it's like Infinity Blade without the gesture-based combat - you just hack at the game's series of increasingly brutal monsters with X, block with Circle, and sidestep with the shoulder buttons.

To be fair, Desert Winds is clearly a long way from completion, but at this stage it's much more concerned to demonstrate what Qualcomm can do technically than what Southend Interactive – developer of ilomilo – can do as game designers.

At the T-Mobile stand I got to play on Madfinger's Shadowgun, which was announced a week or so before the show for Tegra 2 and Kal-EI devices. 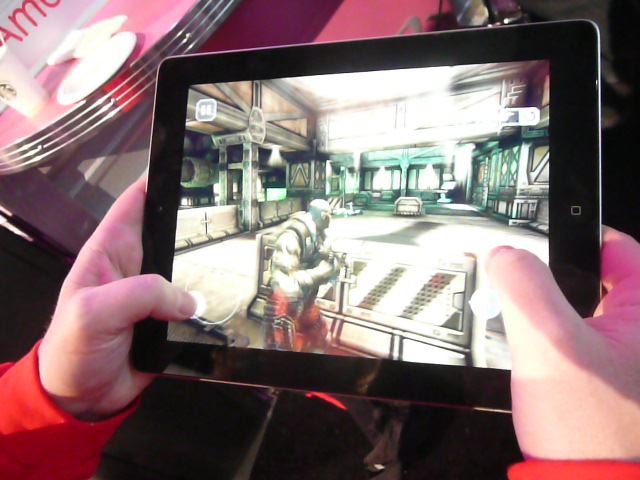 Shadowgun running on an iPad

Rather than leaving the game on display throughout E3, Madfinger has been visiting the stand for an hour or so every day, plugging a Tegra 2 handset into a big TV and playing its Gears of War style-shooter for the benefit of an appreciative audience.

Madfinger wouldn't let me play on the Tegra 2 version – it hadn't optimised the controls for the device T-Mobile had asked it to use for the show – but it let me have a go on the iPad 2 version.

If you've played Gears of War, you've got a very good idea of what Shadowgun is all about. There's a plot currently in development with a professional writer (something about harvesting human body parts for an evil android army), but the demonstration level had none of that.

You run around in a grimy factory, automatically taking cover behind objects, shooting chumps, pressing buttons, and kicking doors to open them. The on-screen controls work well and it all looks magnificently rusty and butch.

The return of Barry Steakfries

Finally, I saw Halfbrick's Machine Gun Jetpack, a twist on the endless running format starring Barry Steakfries. We saw the game at GDC 2011, but it's been enhanced since then with additional vehicles, power-ups, and so on.

The aim is to travel as far as you can from left to right before something kills you. Rather than running along the ground, as in Canabalt, you hover using a jetpack, pressing on the screen to thrust and letting go to glide.

Other vehicles work slightly differently – there's a teleporter, with which you jump from point to point, and a motorbike, which travels along the ground – but the gist is the same.

Halfbrick has packed Machine Gun Jetpack with treats and extras. As you play you collect coins (you can also buy them as in-app purchases) which you can spend on various in-game items and power-ups, which do things like make your vehicle magnetic to other coins or give you a fruit machine-style extra go when you crash.