The Black Shark 2 is a quality phone, but how was the unveiling?

I've been to fancy gaming hardware events before, I know what to expect by now. A big conference, polite applause, someone holding the hardware in the air while cameras flash rapidly. For the most part, the grand unveiling of the Black Shark 2 followed suit. But it also showed that some things in China are done differently.

It all starts at the entrance, where flashing wristbands tap through a revolving gate through NFC to allow entry. Already, the Black Shark 2 announcement feels more like entry to a prestigious nightclub than a tech event for the press.

The conference hall primed for the announcement was down several flights of stairs that simply seemed to cut into the earth. Straight from the bus, a few feet away was this intimidating descent.

Lining the edges of the staircase were powerful green spotlights, shining into the air, visible from a mile away. It all makes for a surreal scene, as if I were stomping into the grounds of the boss lair, ready to undertake the final battle. 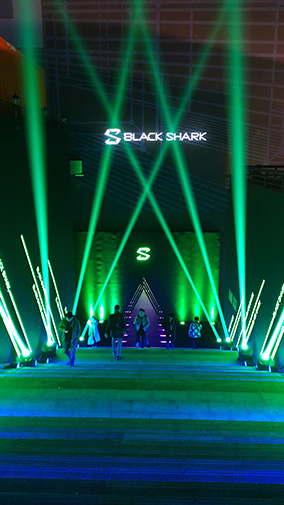 At the bottom of the stairs an illuminated triangular entranceway guides you into the hall, which is bathed in green - part of Black Shark's signature branding.

There, unusually, blonde models stood around, posing and having their picture taken. One was stood in a mirrored pyramid, while another was stood behind a translucent screen, dancing in a box several feet above where people were walking around.

It was definitely an unusual sight to behold - this certainly had nothing to do with gaming or tech. It harkens back to the days of E3 booth babes - a trend which has mostly died off in the western world. Mostly. I wasn't here to pass judgement on Chinese sensibilities, but my eyebrows were firmly raised.

We're guided to our seats, and on the opposite side of the hall we see not tech journalists, but Chinese gamers and fans. It's not too unusual, since E3 welcomes fans into its halls now too, though the cheers and celebrations were lost on me.

Though it makes sense, since this event isn't just here to prove the device to journalists, but to market it at game fans directly. Chinese esports team OMG (oh-em-gee) were here to play on the device, playing a game that looked similar to League of Legends or DOTA, but was a mobile equivalent popular in China.

And it makes sense that the game, and other games shown at the event, are alien to me. China has many social media sites blocked, including Google and all associated websites, which means Android phones in the region can't actually connect to Google Play, and people use other dedicated app stores.

This opens the door to many clones of popular western games and original games gaining popularity exclusively. It's an interesting market that sits in a unique position. And the audience for those games was sitting directly opposite me. 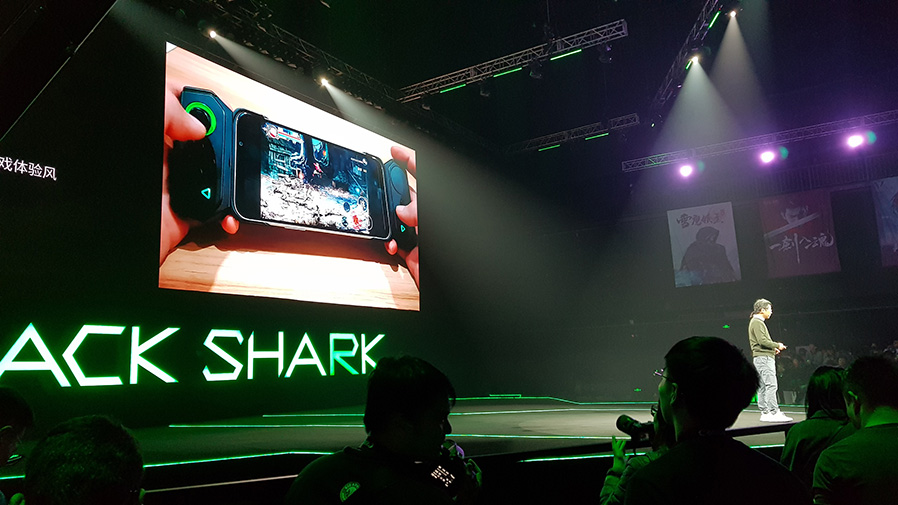 Thanks to a spotty signal I could barely hear the translator over the provided radio device, but the Chinese fans were ecstatic, with cheering and clapping when new games or features were unveiled.

The Black Shark 2 has some fancy gamer-specific features. Even away from the aesthetics, you'll find a unique liquid cooling system inside the device, and a switch which activates Shark Mode, an enhanced gaming mode.

In Shark Mode, the Black Shark controllers can be connected to the device and have their touch screen interactivity set up with minimal fuss.

In addition to that, dual front-facing speakers and an AMOLED screen which claims to have the lowest latency among any phone provide one of the very best places to play Android games - if not the best.

Thanks to legal restrictions past and present, mobile and PC gaming is the main gaming market for China, and the crowd had all the same excitement you'd see when the biggest western AAA games are announced.

The event goes on with executives from Black Shark and Gameloft discuss phone features and what they offer to gamers. The show finished with an intimidating catwalk, where both male and female models in "sexy police officer" outfits marched up and down the stage while holding the new Black Shark 2.

Bass-heavy tunes pounded through the speakers as the models paraded themselves, and once the show ended the models stood in the hall holding the device, expressionless, having photographs taken by excited fans. It was a pretty stark reminder that the Chinese market is different from the western market in a number of ways. 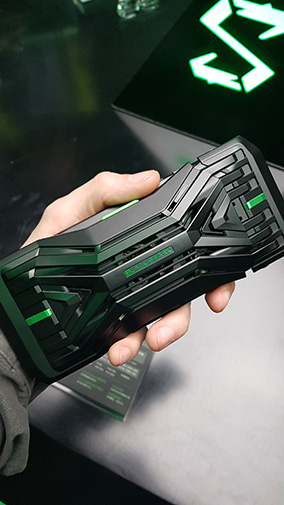 After the show I was able to wrestle my way to a display of the phone. I took a look at the controllers and the unique case which includes a fan - this isn't available yet, and feels chunky, though pretty comfortable.

With all of the various accessories, the Black Shark 2 certainly becomes less portable than your normal smartphone, though certainly still easier to take to a friend's house than a Nintendo Switch, and if you're looking to enjoy Fortnite or PUBG Mobile with friends, this is a fantastic option.

It was an unusual event for a quality product. Looking past that unusual first impression, it's clear that the Black Shark 2 has a bright future.