In the same way that public game companies announce their financial sales numbers every three months, the Quality Index (Qi) publishes its own quarterly figures.

But instead of assaulting your ears and eyes with talk of operating profit, ROI, and monetisation (brrrr), this here Quality Index quarterly round-up ranks the top 20 best-reviewed iOS and Android games that were released during the period January 1st - March 31st, 2015.

As for the reviews themselves, the iPhone, iPad, and Android Quality Indexes boast over 650,000 (in total) of them from the world's leading online sources, including 148Apps, Slide To Play, Pocket Gamer, and AppSpy.

Those concerned that this year's mobile games line up couldn't possibly match up to 2014's will breath a collective sigh of relief after taking a glance at 2015's Q1 top 20 list.

The top spot on the Qi iPhone chart goes to Alto's Adventure, which is already being dubbed 'this year's Monument Valley' - it's breathtakingly gorgeous. Fortunately, it has substance to match that style with a bunch of missions to complete, characters to unlock, and sites to see.

Meanwhile, down in second place is the tap-happy Planet Quest, a stylish and amusing take on the rhythm action genre. If you told us that Planet Quest was developed by Gaijin Games in collaboration with Cartoon Network, we'd probably believe you.

The prolific Nitrome has most impressed us this quarter, with three entirely different games making the list - Gunbrick, Silly Sausage in Meat Land, and Magic Touch: Wizard for Hire. How it manages to produce so many games while maintaining that high standard is beyond us. 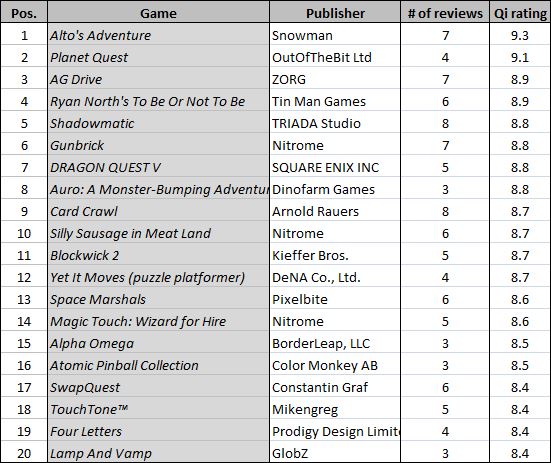 The iPad Qi chart is, as ever, almost identical to the iPhone chart but with one exception - Slitherine's Pike and Shot. Set during the Renaissance period, Pike and Shot is a meaty and detailed mobile RTS that will appeal to hardcore fans of the genre - or those that appreciate a good history lesson.

Down in third-place is AG Drive, a slick, futuristic racer that managed to perfect the F-Zero / Wipeout experience on mobile and then some. With tight tilt controls, exhilarating tracks, and well-paced progression, AG Drive is the mobile racer of 2015 so far.

The Dragon Quest games have slowly but surely been appearing on the App Store for a while now and that trend continued this year with the excellent port of Dragon Quest V. If you've been hankering for an old-school JRPG experience right on your mobile, look no further. 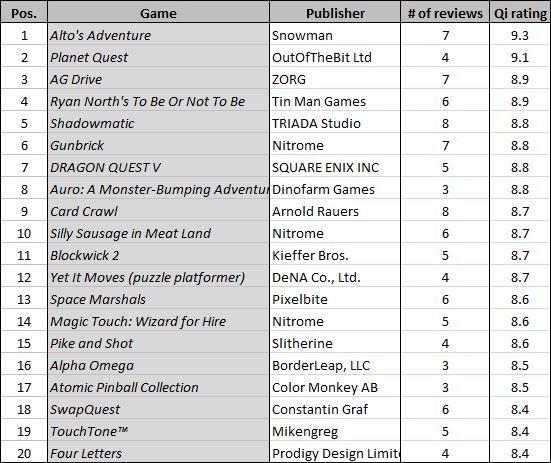 Android is still playing catch-up where releases are concerned but there are a few on the Qi Android chart that are most certainly better late than never.

Limbo in seventh place is an excellent example with its intriguing atmosphere, perfect touch controls, and smart puzzles combining to create one of the ultimate mobile puzzle-platformers.

Meanwhile, Star Wars: Knights of the Old Republic in 17th place is an excellent mobile port of one of the greatest Western RPGs of all time - not one to be missed by fans of the genre.

Finally, we have ZigZag, by KetchApp - the anti-Nitrome. Also prolific, this publisher's games vary drastically in style and quality but ZigZag is by far one of its best - and most addictive. 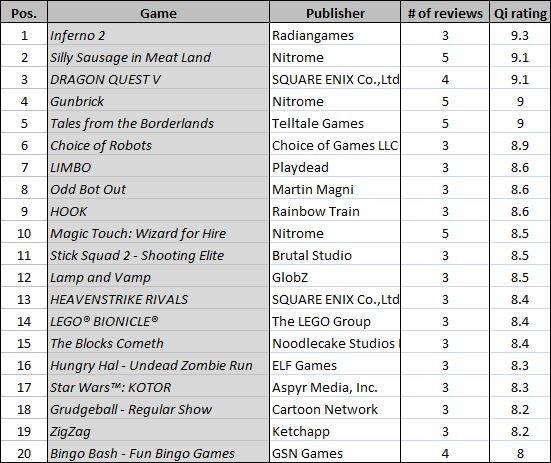 To qualify for a Quality Index rating, a game must have received three or more reviews from the 75+ sites that feed into the Quality Indexes's databases.

In the event of a 'tie', titles are separated in the first instance by number of reviews - the higher the total, the better.

Should the number of reviews also be identical, the Quality Index rating comes back into play. For while we only display the average score to one decimal place, the list is generated to further significant figures.