Like any iOS device, the Apple Watch is filled with little secrets and hidden features that many users won't find for weeks or months - if ever.

Here are a bunch that we think you might not have noticed in your first few days using the watch. Feel free to add more in the comments below. 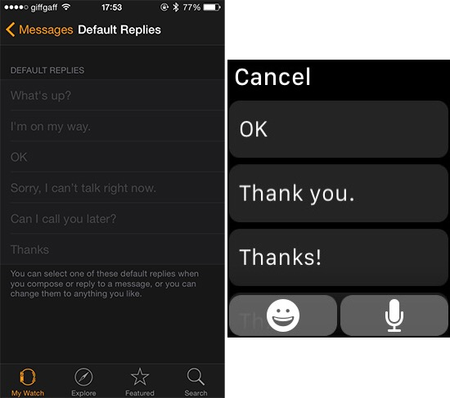 You know those snippets of text that you can choose from when replying to a message on the Watch? You can actually change them to any word or phrase of your choosing.

Open the Apple Watch app on your iPhone, and choose 'Messages' from the 'My Watch' tab. Find 'Default Replies' and from here you can change any of the six presets. 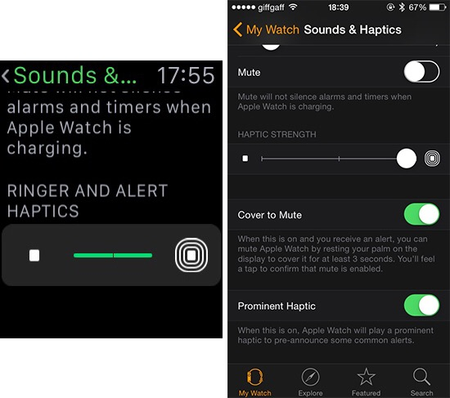 Missing notifications because the tap is too weak? There are a few options to boost this. First, head to the Settings app on your Watch and choose 'Sound & Haptics'. From here you'll find an option at the bottom to make the taps more forceful.

Also, find the same settings page on your iPhone's Apple Watch app and you'll get a bonus option: 'Prominent Haptic'. This will give you a more forceful push.

And finally, make sure the Watch strap is tight. The looser the band, the weaker the tap.

The easiest way to send your Apple Watch to sleep is just to lower your arm. But if you're sat in a weird position where your Watch doesn't register going down, just place your palm over the display and it will instantly shut off.

You can use this same gesture to silence incoming phone calls. Plus, if you hold your hand over your Watch for three seconds when a notification comes in you'll automatically mute the device. 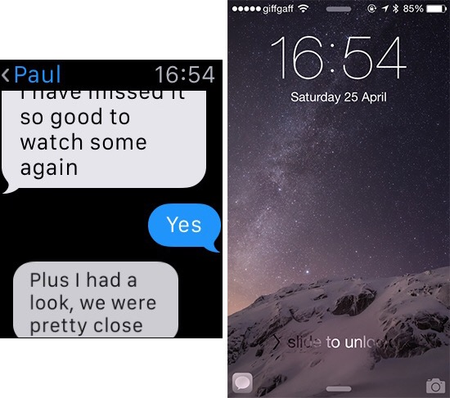 If you receive an email alert on your Apple Watch and decide you want to read it on a slightly larger screen, just pull out your iPhone. You'll see an email icon at the bottom of the lock screen - just pull it up to open on the correct mail.

This works for Messages and some Siri commands and more. 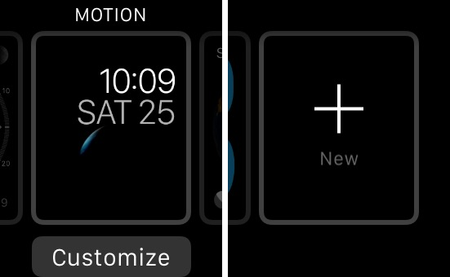 You can have multiple versions of the same watch face, but with different information on them. Just open the face list (force touch on the watch face) and then press the plus button at the end.

Pick from the list of available presets and you'll now have two versions of that face which you can customise independently. 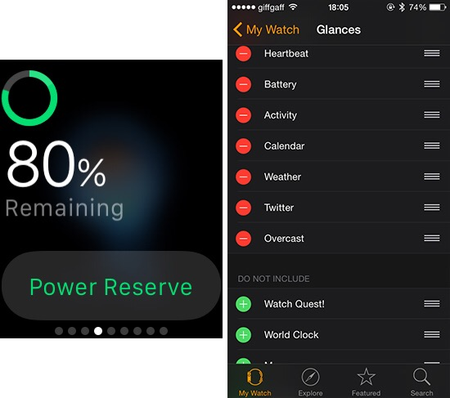 Glances offer small amounts of information and can be found by swiping up from the bottom of the screen while you're on the watch face.

You can choose which to show (for a total of 20) from the Apple Watch app on your iPhone. Pick the 'Glances' page from 'My Watch' and then edit the list.

You can use the minus and plus buttons to remove and add glances, and the handles on the right to change their position. 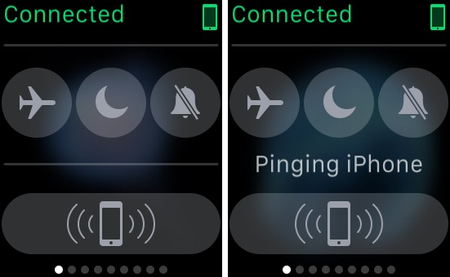 Can't find your iPhone? Open the glances (swipe up from the bottom of the screen while you're on the watch face) and find the Settings glance which is to the far left by default.

Hit the icon showing an iPhone pulsating out to make your iPhone play a chime. It's really loud. Like, super loud.

The digital crown button works a little like the home button on an iPhone, in that you can press it twice to switch between recent apps.

This is a good way to get to your last used app from the watch display without having to mess with the app list - just tap the button twice and you'll zip right to wherever you left off. 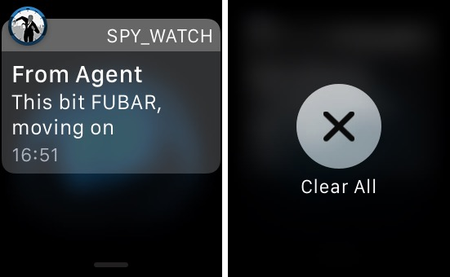 Too many notifications to deal with? Force tap on the notifications list (which you access by swiping down from the top of the screen while on the watch face) to get the option to dismiss all alerts. 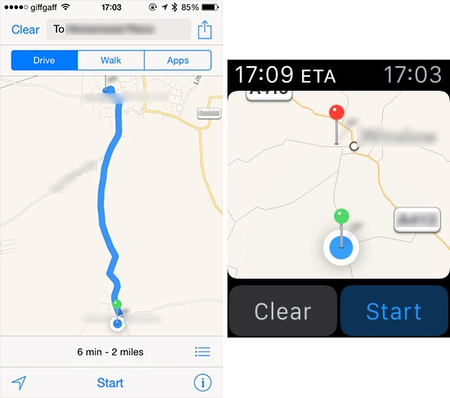 The map app for Apple Watch is really cool. Did you know that you'll get directions through haptics alone? A steady series of 12 taps means turn right at the intersection you’re approaching, while three pairs of two taps means turn left.

But it's a little fiddly to use as you'll have to use dictation to input your desired location.

Luckily for you, then, that it syncs instantly with the Maps app on your iPhone. So if you set up your route from your phone you'll be able to get directions from your Watch. No more "did you mean Mooncherster?" 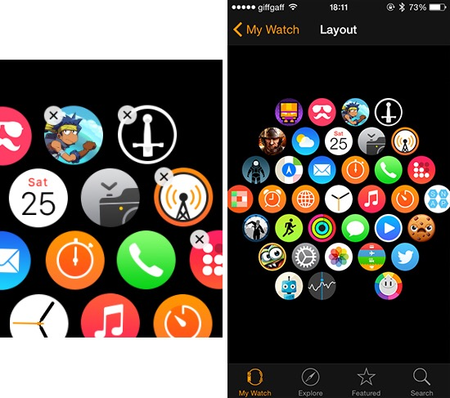 You can actually manipulate your app list, in almost the exact same way as you do on your iPhone. It's fiddly as hell but if you hold your finger on an icon you can drag it around and bring up an 'x' to uninstall that app.

It might be easier on the iPhone, though. You can rearrange your icons by going into 'App Layout' on the 'My Watch' part of the Apple Watch app. And you can uninstall apps by finding them in the list and unticking 'Show App on Apple Watch'.

Or you can go for the nuclear option and delete the app from your iPhone. This will kill it on your Watch, too.

There are two ways to activate Siri. You can hold down the digital crown button like some kind of button-pressing CHUMP. Or you can simply wake up the watch and say 'Hey Siri'.

Want to snap what's currently on screen? Just hit the digital crown and friends buttons at the same time. They're the two buttons on the side of the Watch.

Do it right and you'll see a flash and feel a buzz. You'll find the picture on your iPhone, ready to share on Twitter or MySpace or whatever's cool right now. Snap…Chat? 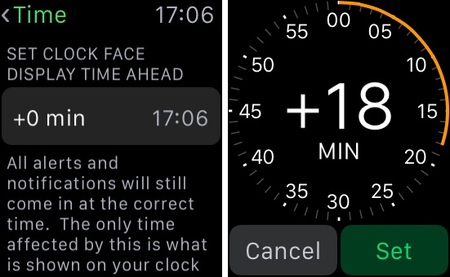 Apparently some people like to do this. They lie to themselves to avoid being late. Hey dummy, just set off early.

Anyway. Don't mess with your watch's time as that will screw with your notifications and calendar and stuff. Instead, open Settings, hit 'Time', and tap on '+0'. Now you can set the watch ahead by up to a minute.

Apple Watch misbehaving? Press and hold both the digital crown and the friend button for a couple seconds and the device will hard restart. 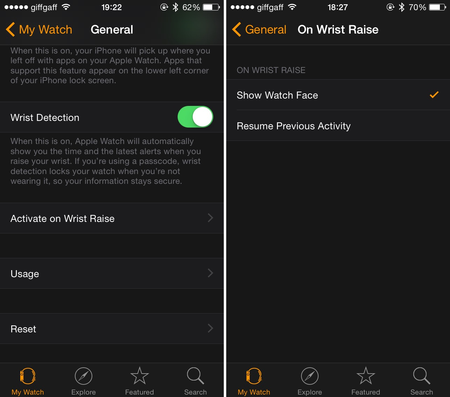 If you lower your wrist when using an app, you'll notice that the Apple Watch will be back on the watch face when you next lift your arm (unless you do it really quick).

If you find that annoying, open the Apple Watch app on your iPhone, hit 'General', and pick 'Activate on Wrist Raise'. From here you can choose whether to show the watch face or 'resume previous activity'.