We dread to think how many family gatherings have been ruined by heated games of Pictionary. The simple premise means that almost anyone is capable of playing - regardless of age - but with this accessibility comes an increased spirit of competition.

Now you can ditch the pencil and paper and take your obsession with doodles online thanks to the superb Draw Something. A crude but accurate summary would be ‘Pictionary on a phone’.

You select a human companion (either on Android or iOS - the app is cross-platform) and then pick a word from a list of three possible choices: easy, medium, and hard.

You then have to draw an image which will allow your fellow player to guess the word as quickly as possible. Once you’re done composing your masterpiece, the picture’s construction is depicted on the other person’s screen, as if you were re-drawing it.

The pen is mightier than the sword

The other player is given a set of letter tiles that contain the letters required to construct the answer, as well as some red herrings. By using bombs - which are limited in supply - they can remove some of the bogus letters if they’re struggling to make sense of your cack-handed scribblings.

A correct guess earns coins - the amount being dependent on the difficulty of the word - and these buy additional colours (you are restricted to black, red, yellow, and blue when the game begins) and a fresh stock of bombs.

Like its real-world inspiration, Draw Something has an appeal that's almost otherworldly - once you’re involved in a tense exchange of images, it becomes an obsessive pastime.

Because Draw Something lacks pop-up notifications on Android (though the iOS version has them) to tell you when it’s your turn, you’ll find yourself constantly opening the game up to check you haven’t missed a challenge.

What makes this compelling situation even more amazing is the fact that Draw Something offers no tangible incentive for victory, aside from a smug feeling. Being the best illustrator doesn’t earn you points on a scoreboard, and being able to guess a picture before the drawing animation has even finished wins you no additional kudos.

What makes Draw Something so addictive is the human element. Like Pictionary, it's both engaging and hilarious at the same time.

Play against mates (you can invite people by email or mine your Facebook friends list for potential candidates) and Draw Something is beyond amusing, but when you’re facing off against random strangers the allure comes from getting to know them and the limits of their imaginations via their deft pen-work.

Draw Something does have some niggles, but they are better described as quirks rather than real problems. There’s no way of policing images, so you could - if you wished - simply write the answer instead of drawing it. Naturally, this kind of action flies in the face of the game’s spirit, and is likely to result in you being ditched by most players.

The other issue - which might not seem obvious to begin with - is that Draw Something has no offline, single-player mode.

If you’re playing on a device that lacks cellular connectivity, you’re not going to be able to participate unless you can locate an open wi-fi spot. This is unlikely to present an issue for the vast majority of players, and it’s hard to fathom how such a social game could be turned into a solo experience, but it’s worth mentioning all the same.

Mobile gaming has seen its fair share of solid-gold classics, but its rare for a game to capture the imagination of so many in such a short space of time.

As with Depict before it, the simplicity of Draw Something’s premise is the key to its appeal. This is a truly wonderful piece of software, and something that every Android and iOS user should experience. 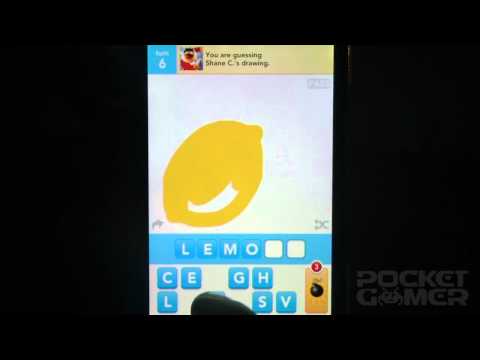 Harnessing the power of your phone's touchscreen - as well as the unbounded power of your imagination - Draw Something is a socially focused work of art that is destined to eradicate all that pesky spare time you once thought you had
Next Up :
Jade Order review - "An puzzling path of the warrior"

Do not adjust your set! Channel 4 is developing the Draw Something TV show for British screens

First impressions of Words With Friends and Draw Something... the boardgames?!