If you've just jumped into Dragalia Lost, then you might need to know how to upgrade your team. It's pretty important.

There are loads of ways to upgrade the power of your characters, both directly and indirectly, and we're here to walk you through all of it.

This guide will walk you through the essential ways to upgrade your team and the items you'll need to do so. There are multiple aspects to learn about, but you'll get it. You're smart. 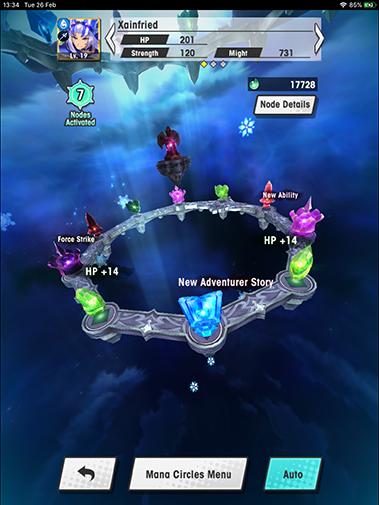 One of the key ways to enhance your adventurers is through their Mana Circles — a somewhat complicated skill unlock process that will boost the overall power of adventurers.

Found in the Castle menu, each character has their own Mana Circle, a ring filled with nodes, each offering a unique buff.

HP increases, more strength, better defence, all of the usual upgrades. In addition, characters will have story chapters unlock through their Mana Circles, giving you a reason to look at characters other than your main cast.

Each node is unlocked with Mana, one of the several currencies you have in Dragalia Lost. In the early game you should earn plenty of Mana from quests and endeavors, so it won't be a concern, but for later Mana Circles you'll need to stock up.

Upgrade the Mana Circles on your most powerful characters first, and worry about your secondary cast members, well, second. The buffs are useful, but you don't want to waste Mana too quickly.

After a circle has all nodes activated, a final node is accessible, which requires orbs relating to your character's element, and other materials. If you want those, you should look at the individual elemental orb quests available through events.

It'll take some time, but try and max out Mana Circles for your rarest characters for a strong team.

Adventurers are upgrading a bit more simply. It's from experience, of course. The most obvious way to earn experience with your adventurers is simply to head out into battle with them.

But that's not the fastest way. In the upgrades section, you can upgrade adventurers using crystals which award large amounts of experience, allowing your characters to level up quickly.

At first just upgrade your main party, but try and leave enough crystals for future characters you might summon that will help you in future battles.

Though summons you'll likely get a few weaker dragons that you can sacrifice to the stronger ones, since they come quite easily. As for dragonfruit, you will need to grow dragonfruit trees in the castle area in order to earn them.

On top of that, you can give gifts to dragons from the castle area, by either buying them items or giving them rare items you find. This increases your bond with them, rewards you with story chapters, and increases the amount of time you can stay in dragon form. 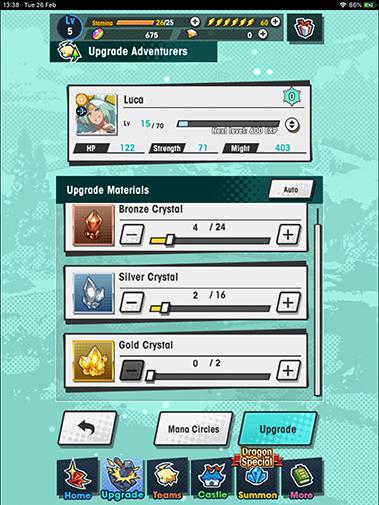 Wyrmprints are equippable cards that essentially act as equipment for your forces, with each character able to equip one Wyrmprint.

Many of them offer simple bonuses to HP, Strength and Might, and you can upgrade Wyrmprints to increase their bonuses.

And of course, Wyrmprints can be levelled up. They require Water, different tiers of which will improve your Wyrmprints to different degrees. It's similar to levelling up adventurers. You can also use other Wyrmprints to increase their experience, though these don't offer nearly as much as a bonus.