Don't Starve is a tried, tested, and well-loved survival game that's no doubt left a few of you screaming in agony when your character dies unfairly.

But, that's the charm of the game. It's incredibly hard and stupidly unfair at times, and it makes you more determined to survive with each play-through.

Sadly, Klei's Nintendo Switch Edition, however faithful to the other ports, isn't quite up to scratch just yet.

Don't Starve has come a long way since its 2013 debut and the Nintendo Switch edition doesn't feel too far behind its other ports.

This edition has three titles of the series bundled up in it - Don't Starve, Shipwrecked, and Reign of Giants. Whichever option you choose, you're spat out into a randomly generated world where you have to scavenge for food, and items to build pickaxes, torches, axes, campfires, and other equipment with. 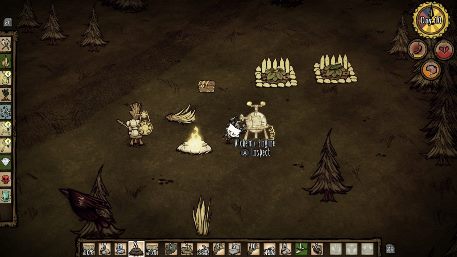 Resource management is one major element in your survival. If you run out of torch-making materials and the night is coming, run out of food when you're starving, or aren't prepared for the extreme season change, you're dead.

Choosing the right strategy to combat all of the world's nasties is another important element since there are so, so many. Sometimes you can't fight enemies head on, so you've got to be smart about it.

Oh, and you've got to manage your own mental health too, otherwise you have to face off against even more baddies just waiting to get their hands on you.

As far as survival goes, this is one of the best games out there, and it offers up a gnarly, hardcore experience. In my first game I was dropped into the middle of five clockwork monsters and had to run like the devil was chasing me straight off the bat. Harsh, but fun.

The 2.5D graphics and isometric viewpoint are still as effective and stylish as always, and the audio and music still adds to the experience. If you've never played the series before, you're in for a real treat.

Keep away from fire

As much as I wanted to be in love with this version, there are a few issues that keep it from being as enjoyable as I know it can be. The controls are a little fiddly to get to grips with, especially since it can be quite a hectic game, and it's easy to press the wrong button.

There are also some mild audio hiccups and irritating technical issues where Beefalo and rabbit holes don't show up in the game. 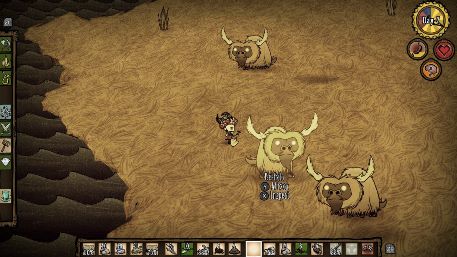 Though you can see the Beefalo's shadows and they do eventually show up when you walk up to them, the rabbit holes are totally non-existent. This makes laying traps all but completely impossible.

No doubt Klei will get a patch ready for this pretty soon, but in its current state it's not the best.

Don't Starve: Nintendo Switch Edition is perfect for survival and strategy-lovers, but it could've used a couple more weeks in testing to nip those pesky bugs in the bud.

Though it's as fun as ever there's nothing different about this version and, especially if you've already sunk hours and hours into the game on PC, console, or mobile, there's no real need to pick this up again. I mean, unless you want to own it on the Switch.

Don't Starve: NSE is a faithful port of the series and one well worth having if you've never played it before
Next Up :
UFO99 review - "A fun little arcade game on the go"

Don't Starve: Nintendo Switch Edition launches next week and there's a whole lot of surviving to be done