We're used to being told to count sheep to get to sleep. But what about doing it to entertain ourselves? Well, Divide By Sheep proves that it works.

It's a maths-based puzzle game by Bread Team being published by tinyBuild Games for iOS and Android. Before you run away at the mention of "maths," let me tell you that you literally cut sheep in half, creating a gory mess, in Divide By Sheep.

Don't worry, the sheep get strapped back together with duct tape moments later. That's easily Divide By Sheep's darkest comedic detail. Anyway, let me explain how it works.

Each level is made up of a bunch of grid-based islands. The number of squares on each island tells you how many sheep it can hold. Your goal is to fill the rafts that sit top left with the exact number of sheep they request.

You do this by moving the sheep across the islands by plunging a finger on to one of them. The island dips a little when you do this. Adjacent islands that you can fling the sheep to will pop up. Then you just swipe to the destination.

The catch is that if you exceed the number the raft can take then it fills with holes and sinks. You won't earn three stars for that level if this happens.

So when you're trading sheep across the islands you need to find ways to divide or add to their flocks. The easiest way to get rid of excess sheep is make them hop over to an island that they can't fit on. They'll then fall into the shark-infested waters, and die. Oh well.

Adding sheep to a group is just as easy as they'll automatically occupy any empty squares on islands you fling them to.

Of course, that's the least amusing part of Divide By Sheep. Later levels get a little more violent. The laser walls mentioned earlier, which slice sheep in half, is only one example. 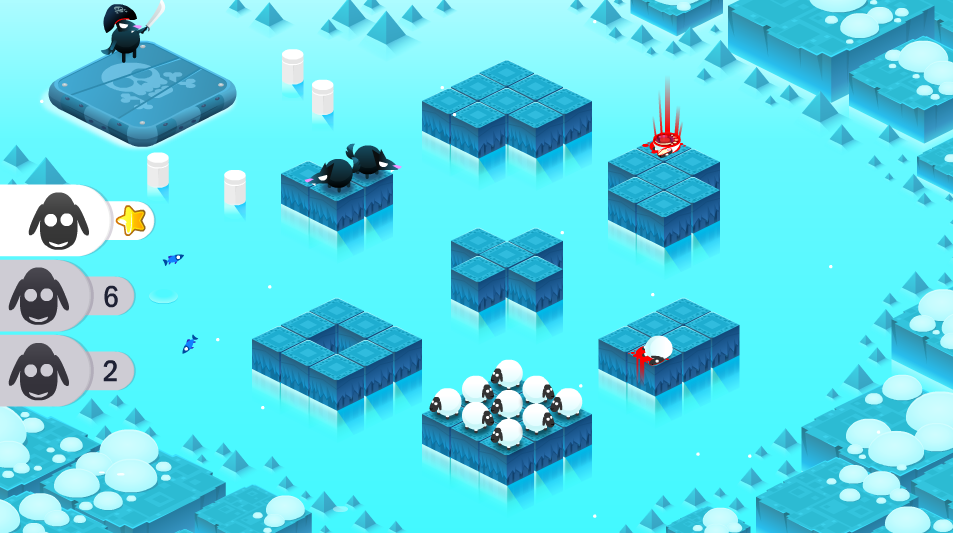 There are also wolves that you need to load up on to their own rafts. They're tricky as they will eat sheep if you fling them on to an island with them. And when the wolves do eat one, their bellies become full, and you cannot move them. At least they look cute when they patting their plump tums.

There are also springy platforms that will divide groups of sheep randomly to different islands when flung on to them. Another variant are the islands made of TNT. These explode when the sheep jump off them so they cannot be used again.

The struggle usually becomes one of trying to avoid killing off too many sheep as to render the level impossible to complete.

This is why the Dark World - the third set of levels - seems so clever. It inverts the game's logic as you need to kill the sheep to fill the raft - the opposite of what you were aiming to do before. 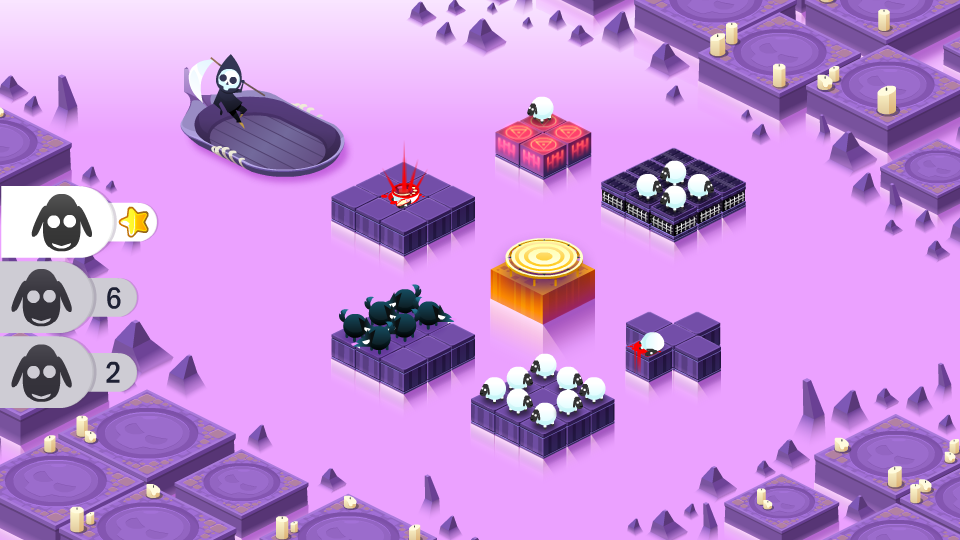 Matching this deathly goal, the Dark World takes place in an underworld that seems to be based on the River Styx from Greek mythology. The ferryman, presumably Charon, looks a bit like the Grim Reaper. The sheep, when dead, turn into souls and it collects them.

Being a fan of the macabre I rather enjoyed this deadly twist. It fits well with the game's increasing cartoon violence signposted in earlier levels, too.

And that's not the end of Divide By Sheep's surprises, either. There's a fourth world that I haven't been able to look at in this preview version.

I didn't think that I'd be as charmed by a maths-based puzzle game as I have by Divide By Sheep. It manages to pull off being both a solid puzzler (I got stumped more than once) and a dark comedy that continues to entertain.

Divide By Sheep gets updated with another world of devious puzzles