Pokemon GO eat your heart out

The grid-based swipey puzzling, nods to the main series, and signature minimalist slickness is all here.

But there are four features that set it apart from others. And, after playing the game in London yesterday, makes us confident that Deus Ex GO is the best in the series yet.

Here are four reasons why.

It's got a story

Okay, so, Lara Croft GO sort of had of a story. Travel through some tombs, grab a bunch of treasure, and fight a massive snake. It's story-lite, if you will.

Deus Ex GO isn't one for half-measures though, and has a full-on plot that's reminiscent of the main series. It's set over several chapters, each of which has a goal to complete.

While we didn't see it in its final iteration, we can say the implementation is completely unobtrusive, and doesn't cause a delay between levels. Instead, it was a nice driving force to inspire you to keep playing.

Let me get this straight - the GO games have always been well-animated. Deus Ex GO is just something else.

It's way more fluid, and the takedown designs are ultra slick.

When you've figured out a level and are just going through the motions without thinking about it, your character darts around like a slick super agent, knocking out opponents, hacking terminals, and stealthing. 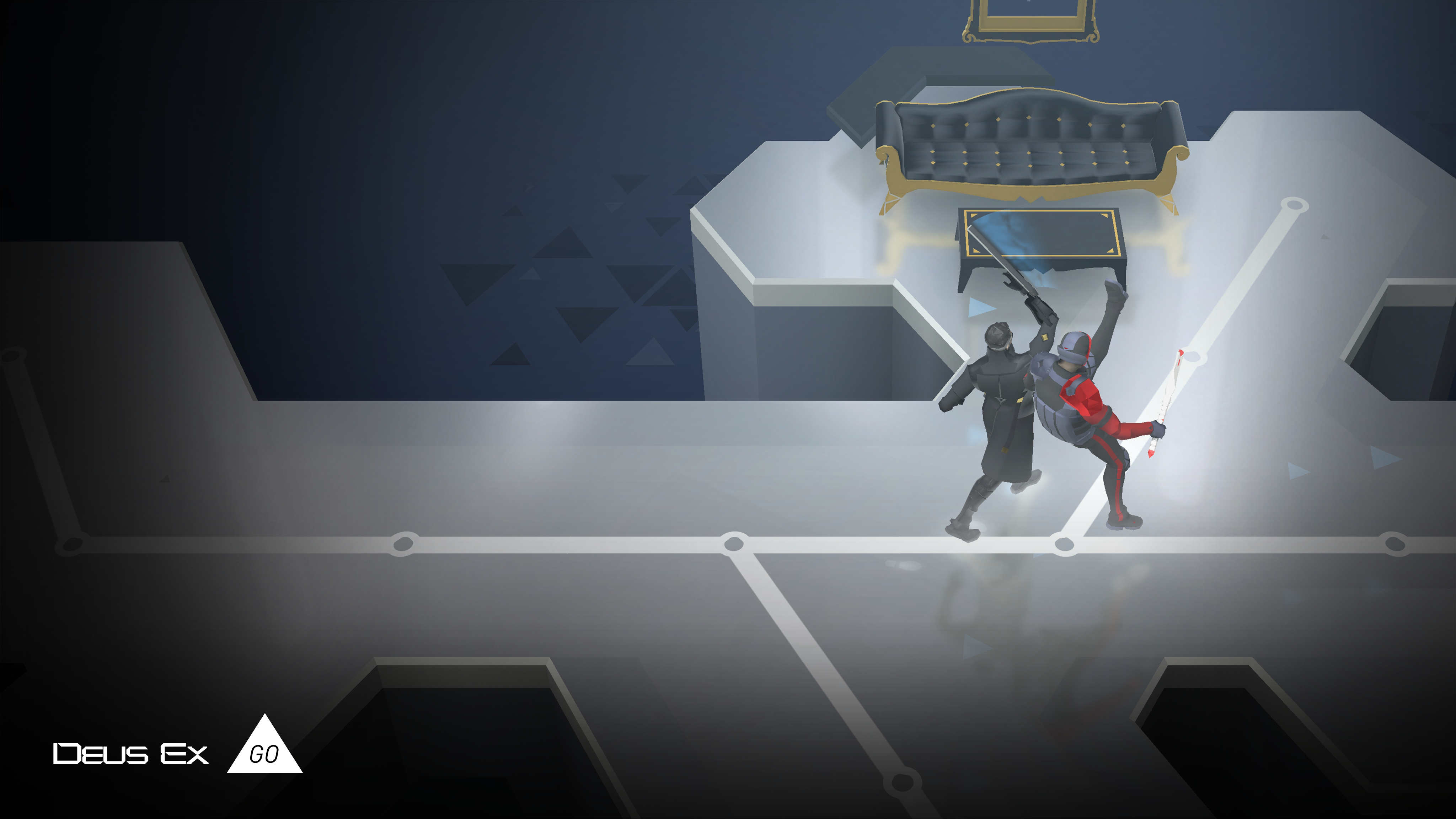 And that extends to the enemies as well. They're incredibly varied - from soldiers, to robots, to drones - and they're all animated as well as they would be in the console versions.

Speaking of that hacking and stealthing - those are new functions in Deus Ex GO that you'll be juggling to solve puzzles.

Hacking is a fun little mini-game in itself. You have to safely reach a hacking terminal, and then draw a line from it to the piece of equipment you want to hack. This becomes a bit trickier when you're hacking multiple pieces of technology at once, as the lines can't cross on the grid.

Augmentations are special abilities your character can use, and come in three different forms at launch. There's stealth, remote hacking, and a gun which you can use to bring down opponents.

To activate an augmentation, you have to charge it by collecting the power-up on the map. At this point, you can use any unlocked augmentation.

They're both excellent additions, and add an extra layer of challenge to puzzles that really puts your brain to the test.

One thing I found particularly upsetting about Lara Croft GO was that the experience was over when you'd completed every level. Sure, new levels were introduced later on, but it was nowhere near frequent enough that you could keep playing for months to come.

Well, that's all changing in Deus Ex GO thanks to the new weekly events. These run from Monday to Friday, with a new level unlocking each day that ramps up the challenge.

Not only does it give you plenty more to do when you've completed the main game, but you can share your progress with your friends, and request help when you're stuck. Or mock them if they're struggling. That's up to you.

Deus Ex GO will hit iOS and Android this summer.
Next Up :
Time Princess: Everything you need to know about the festive 2nd anniversary

The mobile board game news round up - August 17th