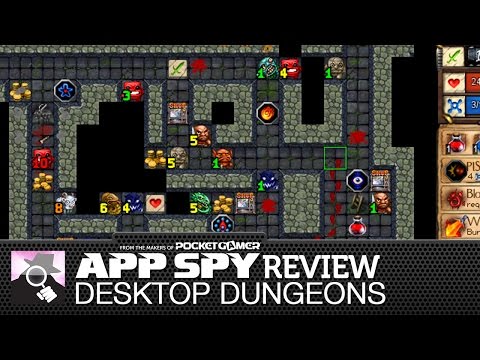 Desktop Dungeons has a little more meat on its bones than your average iPad roguelike. Rather than dealing with a series of disconnected, randomly generated subterranean challenges, here everything is held together by a kingdom-building thread.

The dungeons are still randomly generated, and they're still full of loot and unpleasant beasties to slaughter, but each victory brings you more gold that lets you expand your kingdom, adding new options for when you had back underground.

The game is a deceptively simple turn-based affair. You tap on the screen to move, fight enemies to level-up, and do various things to complete quests. Most of the dungeon starts off in darkness, only illuminating as you move into it.

Revealing new squares replenishes your health and mana, and there are boosts, buffs, and magic spells scattered around for you to collect as well.

Each enemy you face has a number that represents its level. You'll die super-quickly if you try and take on a creature you're not ready for, so you need to explore, level-up, and find whatever gear you can.

The tappy combat system looks a little shallow at first, but the deeper you get into the game, the more you start to understand its nuances. It's all about juggling your hit points, trying to make sure you get the first hit in, and ensuring that you use your equipment wisely.

The more quests you complete the more gold you get to spend on building up your kingdom. This gives you access to different character classes and races, as well as opening up new avenues for adventuring.

There are little puzzle dungeons that show you how the different mechanics work as well, and they require some serious thought to complete.

Pretty deep up as well

Desktop Dungeons feels right on iPad. It's slick, the controls work brilliantly, and what could have been a little fiddly feels like it was built for your tablet.

If you're looking for a roguelike with a cheeky swagger, and enough content to lose yourself in, then this should be at the top of your list.

An accessible but massive roguelike that will suck you in and then murder you. But in a good way
Next Up :
Hundred Days review - "A success for the management genre"

Desktop Dungeons finds its way onto mobile on May 28th