Within 20 minutes of starting Death Road to Canada I've already thrown an American flag at a group of dribbling retro flesh munchers, walked into a bathroom full of the undead, and sworn more times than I can count.

Plus my main character has a trait that makes her more annoying to the others sharing her car in this gore-splattered road trip through a thick pixel-ed, randomly generated rendition of America.

What I'm trying to say is that everything you loved about the PC version of Death Road is still here. It's here in spades, and the port to mobile hasn't stolen away too much of the game's playability either.

When there's no more room in hell

If you're not familiar with the game, it's essentially a dungeon crawler with a modern, zombie-filled twist. You and up to a car-full of allies are trying to make it to Canada, which is apparently free from the undead plague.

But you're going to need supplies to make it up the so-called Death Road. And supplies are hard to come by in an America ravaged by slobbering corpses that want nothing more than to munch your face off. 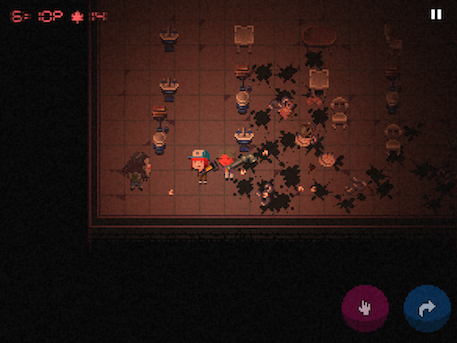 So you need to make stops. You've often got a choice of places to park up and raid, and you're shown a zombie forecast before you storm in that lets you know how tough a scrap you're looking at.

This is very much the sort of game where running away is often the smartest option. And thankfully the touchscreen controls let you do just that.

The left of the screen acts as a joystick that moves you around. In the bottom right hand corner you've got two buttons. One of these lets you pick up weapons, open and close doors, and pick up loot. The other lets you cycle through the armoury you've got stuffed in your pocket.

Tapping anywhere else on the right of the screen swings the weapon you've got equipped. You need to be careful with your violence though - you're not a super hero, and your arms are going to get tired if you swing too wildly. 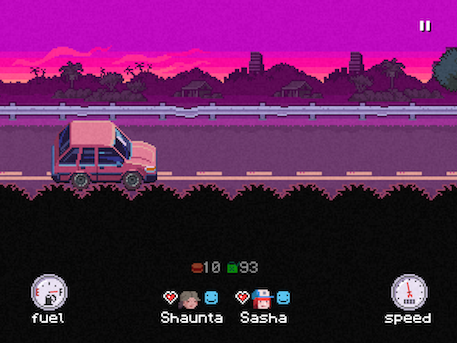 Your allies in the car will also attack zombies, and they can carry extra loot too, so you're going to want to recruit as many of them as possible. Unfortunately though, a lot of the people you'll meet are jerks, and that can lead to your downfall quicker than an infected bite.

You'll need food, you'll need gas, and you'll need a lot of luck if you're going to make it to Canada without your entire crew becoming chum for the recently deceased and risen.

The dead will walk the earth

There are a few niggles here, mainly with the joystick controls sometimes not being quite as sharp as you need them to be, but Death Road to Canada is still a beautifully clammy, scratchy gem.

And it works almost as well on mobile as it does on PC. If you're yet to experience the heady blend of comedy, horror, and slaughter, then this is an excellent place to start.

A dark, funny, and super tough mix of genres. And mobile is as good a place as any to start your journey with it
Next Up :
Bound By Blades review: "Animal kids against evil!"