Out now on Android (Updated: and on iOS too)

Plus, the Starter Pack, Chicken Pack, Heavy Pack, and Premium Pack in-app purchases are now all half price.

Madfinger Games has updated bloodthirsty zombie blaster Dead Trigger 2 with a new mode that enables you to earn cash and rewards by killing the undead in a twisted post-apocalyptic game show.

This new Arena of Death mode is hosted by presenter Titan Newton Tourmaline (TNT, naturally), and pits you against wave after wave of walkers. To even the odds, you get to lay traps and grab lucky boxes (that contain boosts and power-ups). 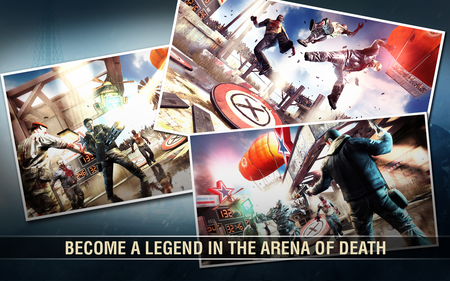 The update is now available on Android, and iOS gamers should expect it to appear on the App Store soon enough. The Bronze Award-winning Dead Trigger 2 is free on both platforms.

Dead Trigger 2's 16 million players should also know that new updates are heading their way every month, as explained in my favourite press release line of March so far...

"Madfinger is keeping its finger firmly on the trigger to permanently shoot out new game content."