Cut the Lab: Magic, the latest Om Nom adventure, is set to hit iOS and Android in a couple of weeks 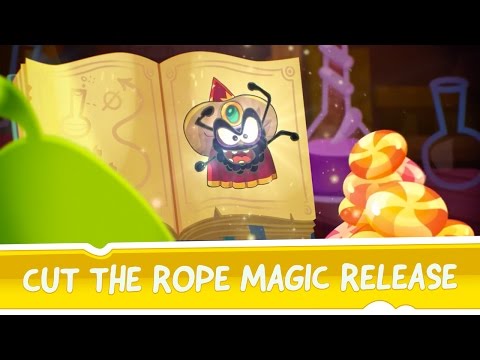 Cut the Rope: Magic has a release date. It's set to hit the App Store and the Google Play Store on December 17th. You can check out a teaser trailer just up there.

The game looks set to follow the usual rope cutting template, albeit with some new shape-shifting abilities thrown in. Because magic.

You can be a bird so you can fly, a fish so you can swim, and a baby so you can squeeze through small spaces. Don't try and squeeze a real baby through a small space though. That is naughty.

Apparently the game has had a coat of paint as well, with Semyon Voinov, ZeptoLab Creative Director calling it "one of the most beautiful games we've ever released."

You'll be able to decide that for yourself when it lands in a couple of weeks.

It'll be free on the Google Play Store and the Amazon Appstore (if you've got an Amazon Underground subscription), and cost 79p / 99c on the App Store.

Transform into a fire-breathing dragon in the first content update for Cut the Rope: Magic

Transform Om Nom into a bird, fish, or mouse in Cut the Rope: Magic, now on iOS and Android

Cut the Rope: Magic has been announced to celebrate the series's fifth birthday