It's amazing that there's any room left to innovate in the puzzle genre. Living up to its name, FreshGames has managed just that with the splendid Cubis Creatures, a consistently smart and satisfying block puzzler of the highest order.

There's a daft story to put all the box-twiddling in context -something to do with monsters falling asleep with cubes in their mouths that you need to match to wake them up - but you can live without it. Far more important are the rules.

The action takes place on a square grid littered with brightly coloured cubes. At the bottom of this grid is your own cube, which you can fire into the grid from anywhere along the bottom or right-hand side.

The idea, at its simplest, is to match three cubes of the same colour to make them disappear. Do that enough times and you clear the level.

But where Cubis Creatures really starts to have fun is with its special blocks. After just a few levels you're introduced to the wedge block, which slides underneath an existing cube and shoves it one level upwards, meaning you can plan your matches both horizontally and vertically.

Laser bolts allow you to zap blocks out of the way. There are even bomb blocks, which clear out huge chunks of the map.

Brilliantly, Cubis Creatures marries these rock-solid fundamentals with perfect puzzling aesthetics. Not only is it bright and bold - especially on a Retina display - it's blessed with immaculate sound design.

The little 'click' that accompanies block collisions sounds just like a perfect snooker shot, while the euphoria of watching cubes fall on top of each other and disappearing in front of your eyes is reminiscent of the glory of Lumines.

It's tricky, too. Every level is timed, and while you don't have to clear every block to progress you will need a solid plan of attack when things start getting trickier.

On an iPhone, it can be a little tricky to line up your shots perfectly (or perhaps it's just my fat thumb), but these are the kinds of mistakes that occur when you're panicked. And when Cubis Creatures gets going, boy do you panic.

A fantastic and frenetic little puzzler, then, and another iOS essential for the block-busting connoisseur. 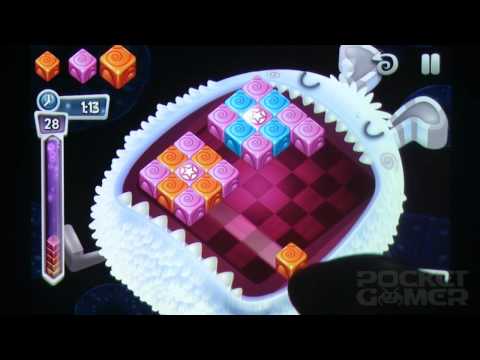