Castle Craft - World War has been released globally and is now available on both Android and iOS. It is a real-time PvP strategy game where your skills decide the outcome. It has been developed and published by RisingWings, a subsidiary of KRAFTON Inc.

In Castle Craft - World War, you have to select your Commanders very carefully. The more strategically you think about your troops, the more heroically you can win. This game is all about politics and strategies where you need to surprise your enemy to prevent them from taking over your land.

It is a PvP game where you have to unite cards to make them stronger. Deploying your choices of troops (Commanders and army) will be very crucial. Don't worry if you fail to win at first; try new Commanders and strategies to win the battle. Outside of PvP, Castle Craft - World War will feature several other game modes for players to tackle. They include Co-op Mode, Simulation Battle, Friendly Battle, and Guild Battle. 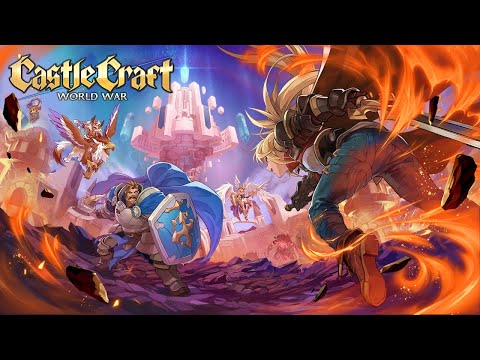 To make your gameplay even stronger, don't forget to scout your enemy; the more aware you are about your opponent, the better. As you grow inexperience and defeat more foes, you can become a conqueror and win some exciting rewards too. Isn't that the cherry on a cake?

Castle Craft - World War was soft-launched in India, Canada, and Thailand a few months back. Players who have played it have given positive reviews about the title. Now, RisingWings has released the game globally, and interested players can now download it from Google Play and the App Store. Castle Craft - World War is all about strategies and battle, so if you are a fan of strategy games, you should give it a try. Interested in strategy games? Check out our list of the Top 25 best strategy games for iPhone and iPad (iOS).
Next Up :
Fantasy Town is an upcoming farm life sim and RPG adventure coming to mobile in 2022