What glorious beards you have there.

Burly Men at Sea not only has an awesome name, but its design and story is utterly charming. Oh, and it's out now on iOS and Android. 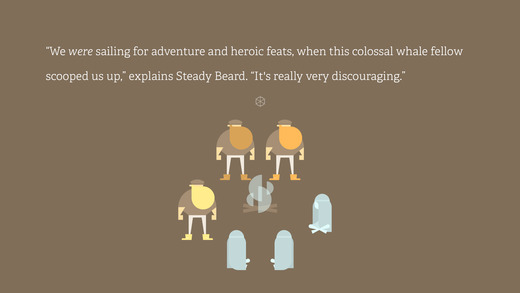 This interesting trio of rather burly, bearded fishermen step out of their usual lives and start an extraordinary adventure. Set in the waters on early 20th century Scandinavia, the story branches across a narrative shaped by you as you encounter various different creatures from folklore.

From what I can tell, Burly Men at Sea might run in the same vein as Stories: The Path of Destinies. Each playthrough is designed to be completed in a single sitting, but when you return to the game you play through another story.

I'll mention the design of the game quickly before summing this thing up because, god, it's pretty. This sort of two-dimensional and ultra-simplistic art is a tricky beast to balance, but the husband and wife team, Brain&Brain have pulled it off wonderfully. Everything is gentle, from the design of the characters to the pastel-wash of the environment. Let's just hope its story stands up to make the game truly shine.

Burly Men at Sea review - A storybook shaped by play