We will play it on the beaches (Updated: it's out now, worldwide)

iOS
| Boom Beach
Updated on March 26th, at 18:33: It's a little earlier than expected, but Supercell has flipped the big red lever and launched Boom Beach worldwide. Let us know what you think in the comments section, down south. The studio behind the App Store juggernauts Clash of Clans and Hay Day will launch its third game worldwide this week.

This new game has a lot in common with Supercell's own Clash of Clans. So, yes, the idea is to build a base, invade enemy islands, and protect your own headquarters from other players.

Instead of dealing with Vikings and dragons, though, you'll be controlling soldiers, landing crafts, tanks, and machine gun nests here.

And instead of being set in a fantasy world, Boom Beach takes place in a tropical archipelago. 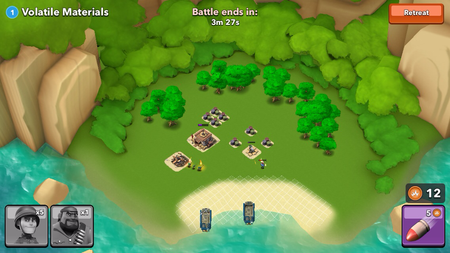 The game is currently in soft launch mode in Canada, but you won't have to wait long for Supercell to release it around the world. We'll let you know when it's live on the App Store on Thursday.

We'll also ask Supercell about its Android plans. Expect an update when we hear anything back from the studio.