Sometimes you just need to kick some ass. But tapping your mobile device rigorously is usually the better option when compared to a bar brawl and a prison sentence.

There are plenty of games that accommodate this need, but none quite like the poultry-raining madness of Big Action Mega Fight!

I mean, come on, with a title like that how can this game go wrong?

The gameplay speaks for itself, as you'll see in the trailer. Seems you'll be able to dodge-roll, string together punchy combos, and call upon special powers to clear the screen. The example is explosive poultry rain. What could be better? 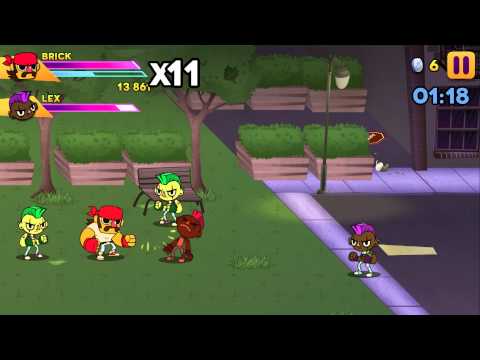 The setting is your standard cartoon urban streets and industrial backdrops, with rough gangs and punks presenting a threat.

There's multiple playable characters, each with their own move sets, and chicken-bombs. Lots of chickens, in fact.

Big Action Mega Fight! is said to be coming to Android and iOS devices soon. Dust off your knuckle dusters. We'll let you know when it's live.
Next Up :
Heroes of Valhalla, a Viking-themed strategy-slash-tower defense game, is out now on Early Access