Redecorate a mansion and adopt plenty of cats and dogs

Hellopet House was initially announced way back in April but today the casual management game is finally available for iOS and Android in English, Simplified Chinese, Traditional Chinese, and Korean. The game has proven to be a popular prospect since it became available to pre-order, having racked up over 600,000 pre-registers prior to release.

You will play as Jane, a young woman who adores pets. She has been invited over to her grandmother's house which is currently being renovated, something you'll have to help with. Aside from making it the home of your dreams, you'll also adopt a host of cats and dogs throughout the game. 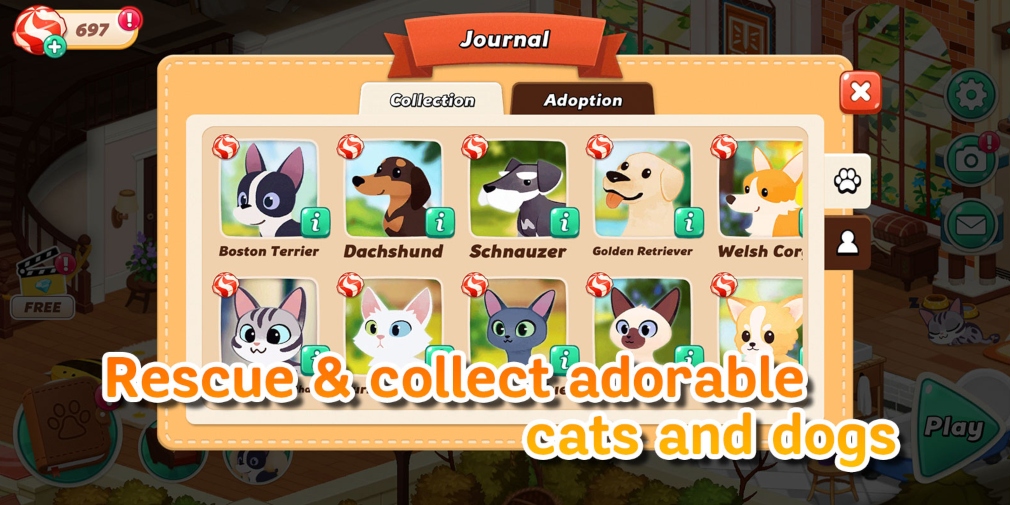 There will be a plethora of levels to complete within Hellopet House itself that will see you engaging in a variety of activities with your four-legged pals. This will include cooking, gardening, home repairs, dessert recipes, and seafood preparation. It seems Jane is quite a versatile cook.

Your ever-growing collection of pets will come in a variety of breeds that will include everything from the Turkish Angora to the Boston Terrier. Each of them will be customisable with over 40 hat and collar accessories to choose from to help emphasis their personalities. Feeding, petting and caring for them on a daily basis will strengthen the bond between you and your pets.

Alongside minding your pets you'll decorate the house and can unlock new areas of your abode by obtaining keys that will give you access to them. So if you're looking for a redecorating game that's combined with a pet simulator, Hellopet House might be worth a try.

Hellopet House is available now over on the App Store and Google Play. It's a free-to-play game with in-app purchases.

Interested in other upcoming games that are currently in soft-launch in various parts of the world? Here are 57 of the most interesting looking games yet to release globally
SEE COMMENTS

Gwent's upcoming expansion, Way of the Witcher, will arrive in December