Crying Suns is a tactical roguelike that will draw inevitable comparisons to FTL, but in a good way, not in dismissive fashion you sometimes get. Dann reviewed the game for us a couple of weeks ago where he found it to be an excellent time. But we decided to get several second opinions from our App Army.

Crying Suns is like FTL with a big focus on Storyline. It's hard, intense and people keep dying left and right dare I say. The game has a sci-fi setting and combines RPG, space exploration, ship management and turn-based combat in a single package.

The Pixel art looks crisp and the UI, interface perfectly supports my phone. I can perfectly read the text. The combat in this game efficient yet very simplistic, and they get a bit too hectic but FTL fans will feel right at home. The visuals and transition between the planets are amazingly fluid.

You are going to die a lot. I was actually moving my stuff around and I had a 3 hr drive and kept playing it, it's very addicting and this is perfect to play for hours because of this mobile version. It totally sucks you in. I cannot recommend this enough. BUY IT.

Crying Suns is an example of inspired synthesis. It draws from a wide range of Science fiction canon, if you are a fan of the genre you’ll be able to appreciate a multitude of references and tropes. Dune references especially. The gameplay borrows heavily from FTL; course-plotting, resource management, occasional trade posts and ship upgrades will be familiar to anyone who has played/loved FTL.

The combat itself differs quite significantly from FTL; Instead of terrorizing enemy crew with fires and flying caltrops, the action plays out on a hex-grid in RTS, reminding me of Star Wars: Empire at War’s space battles, where squadrons of specialized ships battle toward the enemy battleship while the battleships rain their heavy artillery down on the battlefield. There is great tactical depth in these action sequences, and the game truly stands on its’ own legs creatively with its addition.

Another great dynamic is landfall missions, these see your crew from the ship’s perspective, Vitals on the big screen with a real-time satellite projection of the team’s movements as they correspond for coordination and pass various random boons with skill rolls. This reminded me a lot of the card-game aspect of Star Traders: Frontiers, with the immersive presentation.

My final note is in appreciation of how FTL’s roguelike element of fresh runs blends with the narrative-heavy campaign, all narrative progression carries over in real-time. I never felt like I was repeating anything while fleshing out the engrossing and mature narrative over several runs. Crying Suns lacks some of the things that ST; Frontiers or FTL have in spades, but it brings its’ own unique innovations to the table. If you have either of those titles in your library, you need to add Crying Suns pronto. It is a lovingly crafted classic that nods to its influences and brings fresh innovation to the genre.

Crying Sun is like an evolution of FTL. It has the same structure in term of randoms events, upgrades and battles. Graphically, it’s beautiful, pixel art and cool effects. I liked the general artistic direction in it! Battle are interesting. Not only can you, like FTL, fire with your ship, but you have too to manage troops too.

The event system is quite fair, for the moment I never have an event which blocked me. Globally it’s a nice game, if you love FTL you will surely love this one. My only concern, and it was big for me, is the visibility of the text. On iPhone X, it’s sometimes impossible to read a word. I’ve not found any option for the text size, and it’s really an issue when you have a lot of options and dialogue to read.

I liked it, for this fame system, it’s the unique ambience and the overall story.

Crying Suns is a beautiful sci-fi themed game. While it reminds me of FTL, it has an original and engaging story, that fully develops and entertains as the game proceeds. The graphics are stunning, with a balanced mix of new and retro designs. The controls are easy to learn and to manage, and the interaction with the game interface was always smooth.

Battles and exploration are the core of the game, and they are presented in a well-balanced way. I think that it is totally worth playing, and I see myself playing it again and again. If you want an engaging game, with a great re-playability, Crying Suns is the one for you.

Crying Suns is a rogue-like game with a definite FTL vibe to it, although where FTL has you micromanaging a ship with various compartments and your crew, pretty much staying in space as you take on the unfriendly skies, Crying Suns not only takes you through systems and between systems as you work your way across the sector and try to escape the approaching hordes of bad guys, but you also have a mystery to solve.

That’s going to not only take you through encounters that range from battles to rescues to exploring derelict spaceships and stations, (as well as worrying over mundane things like topping off your fuel tank) but also on the surfaces of planets. There you have to select the officer most likely to keep your crew alive and accomplish the mission. Kudos to the developers for introducing that element into a rogue-like, but also for making some of the success conditions on the planet more than just a tactical combat exercise.

The ability of the officer to influence the inhabitants can play a part in mission success. That gives it a good element of an RPG which makes it an even more immersive experience. That and on the simple planetary map, seeing that the team is navigating sort of took me down there with them. And the ship-to-ship combat is equally impressive. While you can’t manoeuvre your mothership, you can plot a detailed, even evasive course for the various craft you can deploy against your opponent. That includes drones, fighters, and frigates. 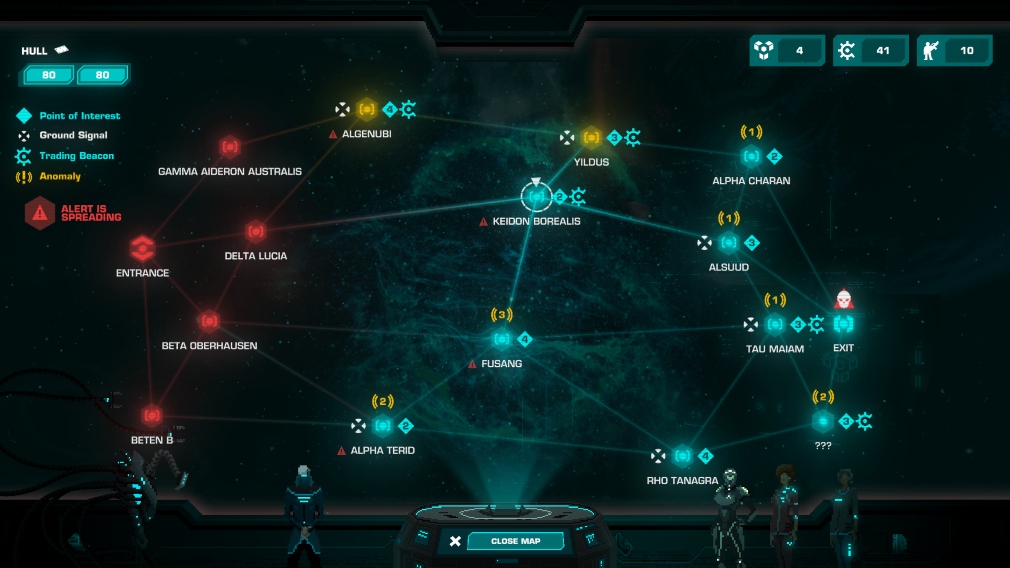 Plus you have ship-based weaponry that can target one of three enemy subsystem. It’s an impressive, in-depth combat system that is engaging and satisfying. The game’s graphics, basic as they are, are sharp and add to the experience. I found the ship to ship combat controls a bit hard to grasp and was wanting a solid tutorial that just wasn’t there. But I overcame that, and the game is so good that I don’t think that’s a deal-breaker. It’s good enough that it’s worth taking the time to master.

My only other issue, and the reason I eventually played it on my iPad, was that the text was a little hard to read even on my iPhone 11 Pro Max. Again, not a deal-breaker. If you’ve been wanting an FTL experience on your iPhone (like I have), especially one that gives you a solid story and a mobile gaming experience with a bit of depth and meat, I recommend this enthusiastically.

Let me start by saying this game is challenging, but also very addicting! Crying Suns is a sci-fi themed game with very similar features to FTL. With each Play through unlocking new officers ships and even weapons, there is always something to do in this choose your own adventure style game. The crisp pixelated style graphics give this game a real familiar yet advanced feel, building to an amazing experience supported by familiar playstyle with an interesting story.

While the controls are a slight nuisance at first with the lack of real tutorials showing you what you’re supposed to be pressing. However, once you figure them out and get used to the controls they are very well put together and responsive with no issues. The story is captivating and propelled me to keep playing for hours on end hoping to get a little further and solve more of the great mystery.

I really have enjoyed my time with Crying Suns and will continue to do so for the foreseeable, I must reactivate the machines and find out what has happened to the empire and why the machines were all shut down, and maybe rescue a few people while blowing up some scrappers along the way! 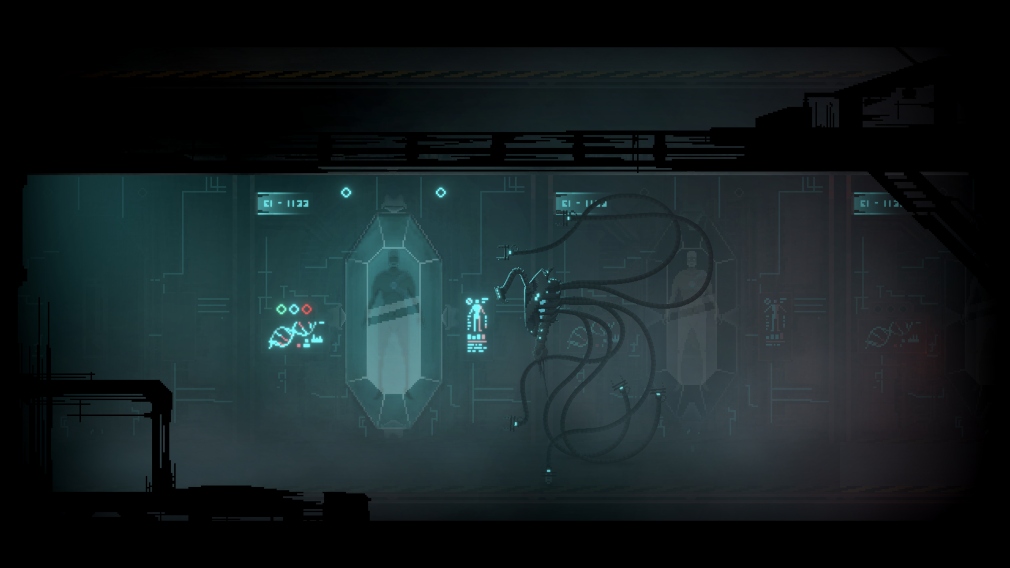 Crying Suns is a great, dark-themed Sci-fi looking rogue-lite game, where you travel from planet to planet like in FTL. You may encounter a fight or an event that is pulling you more into the story. The story is a big plus in this game compared to other rogue-lite games where you just pass stage after stage but it is also necessary to mention that the information of the story and the UI is a bit overwhelming right at the start. (The main characters' memories are blurry and so are yours too)

The font is also a bit small on a smartphone but much better on a tablet. I am pretty sure that the UI and gameplay features will turn out much better once I've got used to it. Although the story is meant to be "beaten" in the first place you still have to be careful because sending out a wrong airship type could mean huge losses at a later point and also the Neo-N (gasoline in crying suns) has to be used carefully because you can run out of it like in FTL.

Compared to FTL it is very nice that you can have a few fleets on the field that help you having a strategic experience. On the one hand, you can send out all of your troops to destroy the incoming fleets and on the other hand, you can try to be sneaky. Sneaky means you will be sending your fleet behind your foes backline and destroy some modules of their main ship what gives you an added advantage because you will slow down your foe a lot.

The music is also great and a good match for the graphics and setting of the game. Although I didn’t have the best start I am definitely hooked and want to explore it much further.

PS: although the game was searching for a savegame in my game centre account I wasn't able to continue my savegame on a different device. 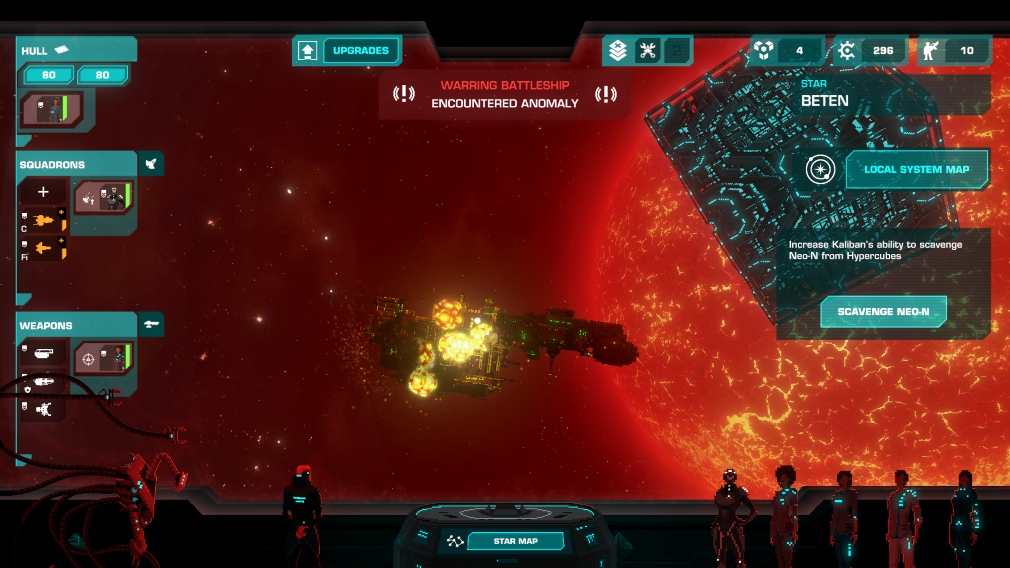 Graphics: this game is presented with a beautiful blend of new and retro aesthetic. It looks absolutely amazing. The beauty of the game lends just the right atmosphere to the experience.

Gameplay: The gameplay is engaging and fun. While the dialogue in between can go on a little long, it never really becomes a problem. The battles are the core of the game, and as such, are tight and well balanced.

Story: The universe of Crying Suns is deep and well developed. The story, and the mystery behind it, drives you to keep playing and exploring.

Controls: While a little hard to figure out at first, the controls are nevertheless well organized and responsive. I have not had any sensitivity issues whatsoever

Overall, this game is great. It is beautiful, fun, and intriguing. I look forward to playing more of it.