Magic: ManaStrike's latest season is now underway and will be called Ikoria II. This update will introduce a new Magic Pass-exclusive skin, three cards and other changes such as Event Mode improvements and additional Color Strategy Tutorials.

This season's Magic Pass then will have its usual variety of rewards on offer such as Level Boost Vouchers, a Skin selector, an Emoji and Player icon among other goodies. There will also be a skin available for the Planeswalker Tezzeret that's inspired by the Tezzeret the Schemer card from Magic: The Gathering. 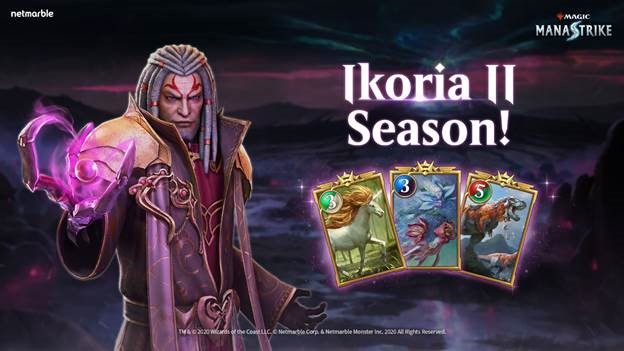 Netmarble has also introduced hybrid multicolor cards for the first time since the game launched earlier this year. These cards will have two colours which means that they can be used in a deck that matches either of them, giving them a little more flexibility than some other cards.

All three of the new cards that have been added in the latest update are of this variety. They include:

Elsewhere, the developers have also added a new Color Strategy Tutorial to Magic: ManaStrike. This is designed to help players learn how to build decks using White, Black and Blue cards and the different ways you can utilise them. There will be 5 different strategies to learn from it.

Finally, there have also been some changes to Event Mode, specifically when it comes to getting Planeswalkers. Players will now be able to buy them with a currency that can only be collected by taking part in Event Mode called Event points.

Looking for more multiplayer games to test your skills against other players? Here are 25 of the best available for iPhone and iPad