Reflex Unit 2 was unleashed onto the world earlier this year, bringing some twin-stick shooter action to both iOS and Android. It'll see players defeating waves of robotic drones that are invading your planet and it's your duty to protect it at all costs. Not got around to trying it? Here are 5 reasons why you absolutely should.

Reflex Unit 2 boasts a lengthy campaign that will clock in at around 4 hours across its 9 different levels. You'll be able to battle your way through those missions either solo or, if you'd prefer, with a friend in online co-op.

Each stage will have a hidden mech part to collect to upgrade your battle tanks, so you'll want to make sure you're exploring each level thoroughly so you can snag these helpful parts. There are 14 to collect in total with the final piece being rewarded for beating the game on both normal and expert.

That's right, once you've bested the campaign once you'll unlock an additional difficulty. This will feature 'night mode' versions of the maps you'll have become familiar with and provide an extra challenge to really put your skills to the test. It's also an opportunity to discover extra secrets and bonus items.

2
You can go loud or stick to the shadows

Reflex Unit 2 might be a twin-stick shooter at its core but that doesn't mean it doesn't accommodate different playstyles. Alongside all-out attack, you can opt for a stealthier approach, with access to several mechs that are small enough to slip through various gaps unnoticed.

There are multiple different weapon attachments to get to grips with too. Some of those are designed with maximum destruction in mind such as homing missiles or plasma grenades. Meanwhile, if you prefer to play a little more defensively, you'll be able to make use of shields or invisibility cloaks so you can surprise your enemies with attacks from the shadows.

Once you've had your fill of the campaign and feel like you're a mech piloting master, you might want to test your skills against other players in one - or both - of the game's two multiplayer modes. Each has a global leaderboard to aim for the top in if you're the extremely competitive type. 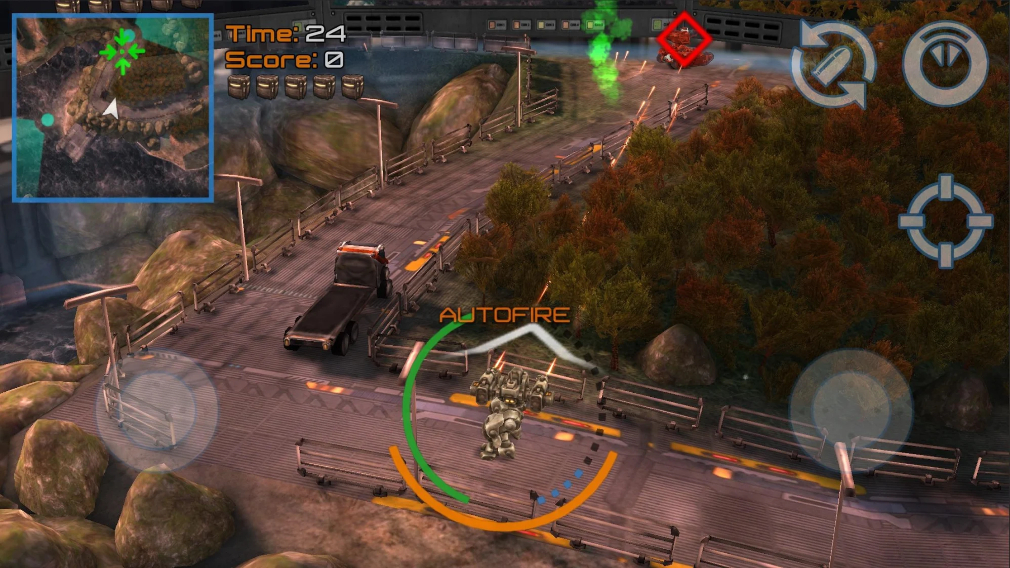 There's Online Versus which is a deathmatch style setup where 4 players will battle it out to gain the most kills in the match. There are 5 maps available at launch for you to learn inside out in order to gain an advantage over your opponents.

If that doesn't provide enough tension, then perhaps you'd prefer Survival mode. This is a short, mini battle royale where up to 4 players will fight it out to be the remaining survivor. You'll need to act quickly though as matches only last around 3-5 minutes, making it the perfect game mode to play in short bursts.

Each game sees you start off as a pithy soldier who will need to scavenge for mech parts and equipment so they're prepared to eliminate any opponents they may come across as the stage area slowly decreases throughout the game. There are 3 survival mode maps available at launch so there'll be a greater variety to the games beyond the loot and where the circle happens to shrink.

Did you know that Reflex Unit 2 is also available on other platforms? Well, it is, and you'll be able to play it on Oculus Rift, GO and Quest in addition to mobile if you'd like. Regardless of where you choose to play the game, the player base will remain the same thanks to cross platform support.

This means you won't have to queue for ages to hop into a match of Versus of Survival because there's a larger player pool for matchmaking. Which is great, because no one enjoys waiting too long to jump into some multiplayer action.

5
There's no pay-to-win to worry about

There are free-to-play and premium versions of Reflex Unit 2 available but the only real difference between the two is whether or not there are ads. So you don't have to worry about players being able to get ahead just because they've dropped more cash on the game than you have.

The ad-supported version is intended to be as unobtrusive as possible too, with ads only appearing in the menu screens and not during the campaign or when playing online. Plus, you'll always have the option of removing them with the solitary IAP the free version has if you want to.

So if you're in the mood for some mech-centric warfare you can download Reflex Unit 2 now over on the App Store and Google Play. There are both free and premium versions available.