Developed in collaboration with the University of Cambridge

The newly released Dish Life: The Game is described as "part Sims, part Tamagotchi". It sees you starting out as an undergraduate student, gradually rising through the scientific ranks to become a professor. You'll do this while helping your colleagues and managing the day-to-day running of your lab. It ultimately aims to showcase the laboratory as a social world, where strong relationships are key to achieving great science.

I first played developer Pocket Sized Hands' latest back in January at Pocket Gamer Connects London, and I felt it was one of the most interesting titles on the show floor. What first appeared to be a fairly straightforward educational game – funded by the University of Cambridge, no less – quickly revealed itself to be a surprising and layered, though still very accessible, sim with some intriguing role-playing elements.

The basic idea is that you'll work to run and expand your lab, dealing with the various complications and challenges that arise over time. Your stem cells need to be cared for, your colleagues may require your support, and you're going to have to consider a number of tough decisions that could make or break your research and friendships. You may also have to deal with things like bullying in the workplace, media controversies, and challenging ethical quandaries. 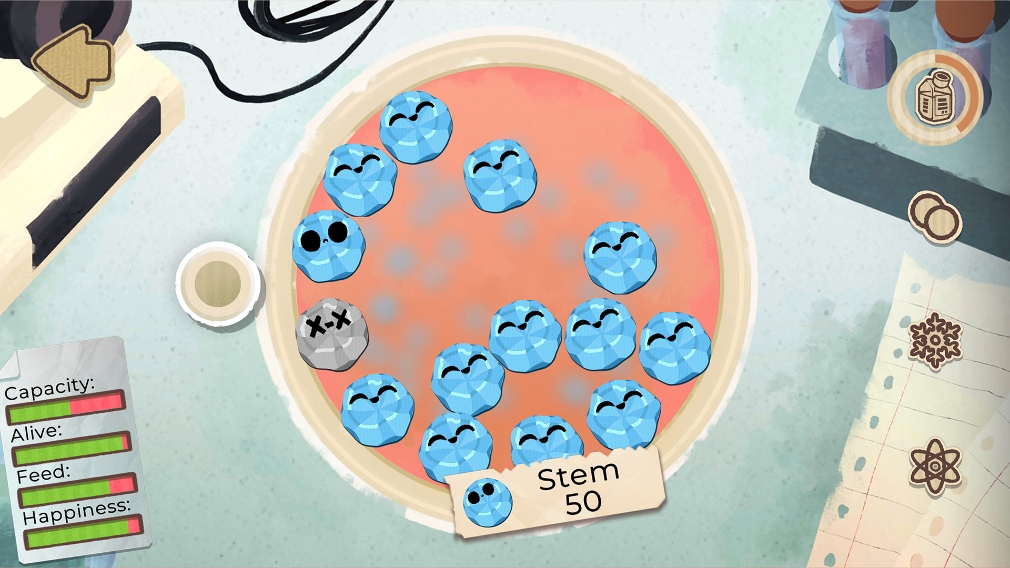 It's the sim aspects and enjoyable minutia of running a lab that makes Dish Life feel so very distinctive. Caring for your stem cells scratches that Tamagotchi itch, and managing the lab and its staff is satisfying work.

If you hear the term "educational game" and instantly switch off, know that it easily sidesteps the tedium of the genre to deliver an experience with personality to spare. There are definitely moments where your knowledge will be tested, such as the little reports you have to write, but they feel natural and – dare I say it? – quite fun.

It was developed in collaboration with Cambridge sociologists and stem cell scientists from the university's Stem Cell Institute, including producer Dr. Lucy van de Wiel (Cambridge Department of Sociology's ReproSoc group), giving it a certain level of authenticity. The game follows on from a short film directed by Chloe Thomas and produced by Dr. Karen Jent (ReproSoc) and stem cell scientist Dr. Loriana Vitillo. I've embedded it above for you to give it a watch.

Dish Life: The Game is now available for download from both the App Store and Google Play as a free-to-play title.

On the hunt for some top-tier adventure games? Here are 26 of the best for mobile
SEE COMMENTS