Onitama: The Board Game review - "A short, sharp, entertaining mix of chess and Clash Royale"

One of the biggest problems with a lot of the board games on mobile is that they're really dense experiences. You need to set an hour or so aside just to play through the tutorial, and you don't really start to grips with things until you've won a handful of games against the AI.

Onitama doesn't fall into that trap though. It's a much lighter experience, while still managing to hide some pretty deep ideas.

It's sort of like if chess, Crouching Tiger, Hidden Dragon, and Clash Royale all had a roll about on the floor together, and the pattern they made in the dirt was translated into an experience you can play on the go.

The game sees you controlling five pieces on a small, gridded board.. Four of these are essentially pawns, while the fifth is a kung fu master of some description. Unlike in chess though, these pieces aren't limited to one set of actions.

Instead every turn you've got two movement cards to pick from. Any of your pieces can use them, but you can only move one piece per turn. There are two ways to win. Either you get your master to your opponent's dojo, or you kill the other player's master.

You can see the move cards that the other player has in their hand, and there are only ever five in the game. Every turn you've got two to pick from, and the one you play goes over to your opponent. They can't use it straight away though. 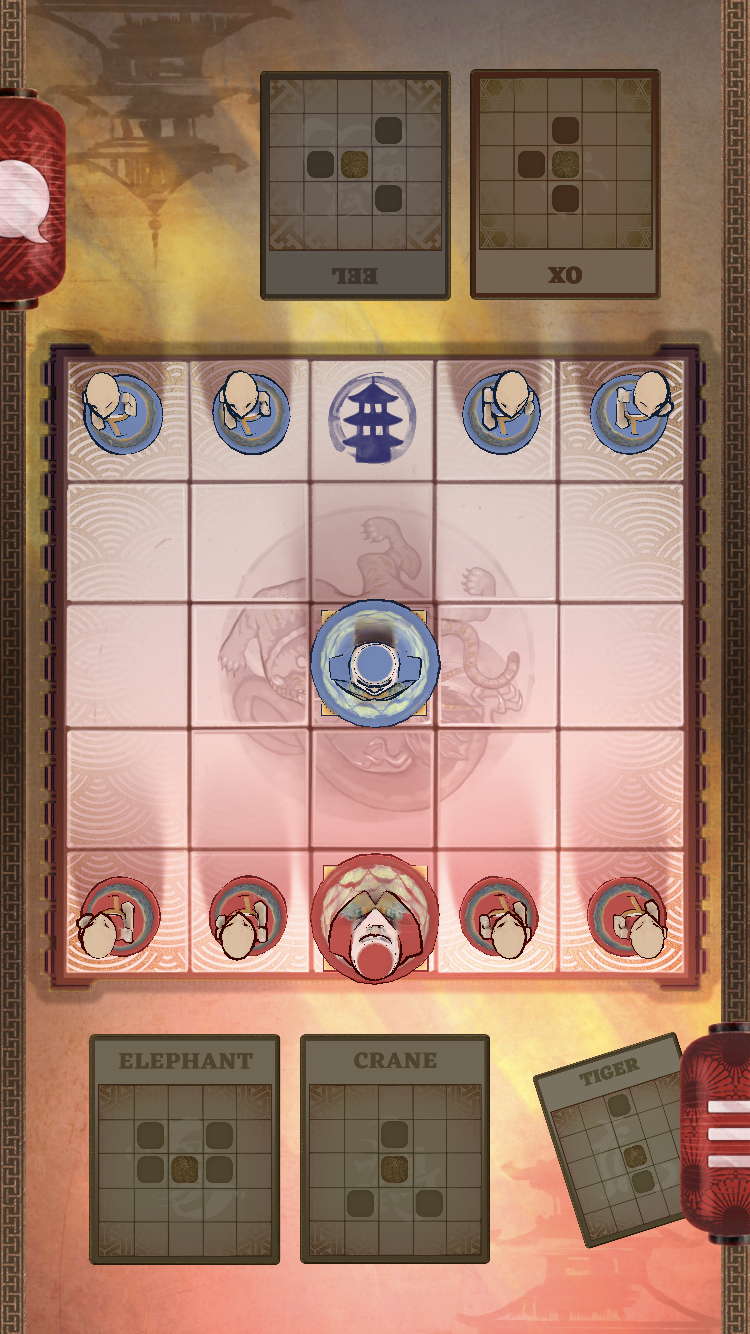 What follows is a tightly packed game of move and counter-move. Since there are two ways to win you've always got choices to make, but you also need to consider what your foe is doing and how to block it.

The small board-size does make for a lot of back and forth, especially when you've only got a couple of pieces left and you're trying desperately to keep the other player at bay. But there's plenty of scope here for thrilling encounters that go down to the wire.

There's nothing complex about Onitama, at least mechanically, and once you've played the brief tutorial you can head online to play other people as soon as you'd like.

The multiplayer here is robust, and there are measures in place to ensure that games are over and done with in half an hour or less. But there's some real tension here all the same, and fights can become nerve-jangling pretty quickly.

It's all about you and the plans you can work out, rather than the random cruelty of dice rolls, but there's so little to learn you can jump into the play pretty much from the start.

Want more? Check out our growing collection of Onitama: The Board Game articles!

Onitama: The Board Game

Onitama is a light board game experience that hides a huge amount of depth
By Harry Slater
| Sep 7, 2018 |
iOS + Android
Find out more about Onitama: The Board Game

Tropico for iPad still doesn't have a release date, but it does have a price now

Missed the high kicks and low blows of our Onitama: The Board Game stream? Catch up right here

Ever wanted to see James Gilmour pull off some sick kung fu moves? Well you're in luck then

Get ready for high kicking, a-bit-like-chess action in tonight's live Twitch stream of Onitama: The Board Game