Pocket City popped up last week on iOS and Android and, while I was initially unsure how a premium city builder would feel, I was pleasantly surprised by how smooth and fun it was to play.

In it, you've got to build up the biggest, best metropolis you can while keeping your citizens happy and watching out for multiple areas, such as traffic, power, water, etc.

At Pocket Gamer we thought the game was great, giving it a Gold Award and saying: "Pocket City is a fantastic addition to the city building genre with slick gameplay, speedy progression, and that 'just five more minutes' feel."

But what will our App Army think? Let's take a look.

As I have never played any city builder before this time around I am treading into uncharted waters, and by that I mean city limits, of course. From what I saw there is quite a lot to do as the mayor of your town apart from erecting residential, industrial and commercial zones themselves.

To make your citizens happy you should consider their needs and pay close attention to an elaborate stats menu, which contains all the relevant information. First I was quite disappointed by the fact that Pocket City plays in a portrait mode, but after going to the settings menu I discovered not just a landscape mode, but battery-saving options as well. I am unable to compare PC to another representatives of the genre, but at first sight it appeared to be polished, well-thought, and a rather large-scale project.

Unfortunately, I will not be coming back to this pocket metropolis due to my disinterest in city-building games.

I really enjoy playing city building games since I first tried the old PC game SimCity 2000 back in 199x. Then, I slowly forgot about the genre, as mobile games didn’t help filling that slot.
Pocket City does everything a city building player would want in mobile. Payment upfront, no IAP, no ads, no waiting times, nothing. Just enjoy.

For newcomers, the tutorial covers pretty much everything.
You build residential, commercial, and industrial zones, then power stations, fire stations, schools, etc. The usual stuff in every city building game.

There is a single player mode with a LVL system that keep introducing new buildings and mechanics. There is pretty easy to get to lvl 50 in a couple of hours. Everything you do gives you XP, and missions give a lot of money and XP. I’d say this mode is like an expanded Tutorial.

The real game lies in the sandbox mode. Everything is unlocked for you to relax and play. The only thing I miss is city inter-connectivity, like in the SimCity games.

I totally recommend this game for some old school gaming. I would have bought it eventually.

Pocket City is a simple, not too complex city simulation game. It gives you good depth and an old-school return to the simpler (not super simple) SimCity.

It's nice to be able to turn off natural disasters, but I was still quite upset when the tornado took out half of my city.

It's a very addictive game, has nice graphics, and it runs very smoothly with no crashes so far. If you like Sim City, this game is a must buy. 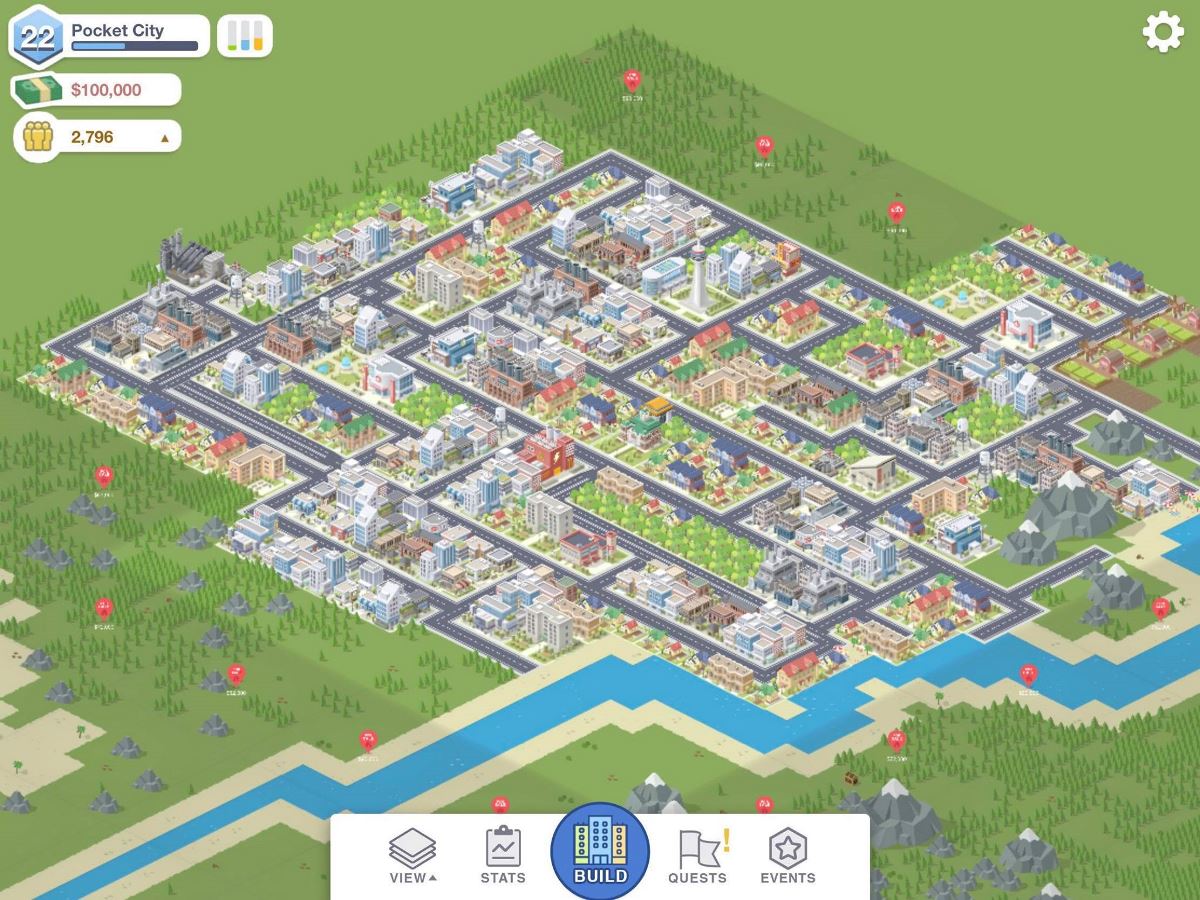 Have you seen that meme of the otter that hates watermelon, but can't stop eating it? If you have then you can stop reading now, those are my thoughts in a nutshell.

Pocket City is repetitive, mindless, unoriginal, and tedious, but I can't stop playing it. I can't even explain why.

I'd like to see a few improvements, like showing that a new zone you're building is too far away from a road to access utilities. It would also be nice if the "skyrail" didn't demolish everything in its path as I found out to my cost. Honestly though, these are pretty minor gripes as you soon get the hang of how things work.

I can't say I really recommend you get this one, but at the same time I am?

Pocket City is the SimCity on mobile you have sort-of been waiting for. It has most of the features of SimCity, but unlike the official mobile version this game has no IAPs and no forced wait timers. You can build away to your hearts content without worrying about having to stop playing as you are waiting for a timer to countdown.

I say 'sort-of been waiting for' because the game is a simplified version of SimCity. With the original games if you made industrial areas near residential areas it affected the way the areas looked. The houses would develop differently because social impact played a part in how areas would develop and then that, in turn, had an impact on crime, etc. I didn't see this in Pocket City.

Another difference is that water and power are made available to areas by the placement of roads and buildings touching, in SimCity you had to lay powerlines and water pipes which then allowed you to form the city on top of this how you wished. In Pocket City I found myself having to lay roads where I didn't really want to, else those areas wouldn't develop. These are things that can be improved over time with updates to Pocket City and even with these shortcomings it's a better game in my opinion.

The graphics, though simplified, are clear and work well. You can zoom in and see people moving about. Sound is also used well, but can be a little empty at times.

Is this the best city builder you have ever played? No, but it is a good game and can scratch that itch if you want to build your city on the go. Hopefully the dev will continue to work on it and flesh it out a bit more.

Pocket City is the delightful SimCity you have been waiting for. With all of the base mechanics and water and power simplified, this game is easy to get into.

With great instructions, Pocket City is easy to pick up and play even if you've never played SimCity. With levels to gain and quests to do, you will find yourself always wanting to add just one more building. I just wish there were more quests and diversity.

I highly recommend this purchase. With no microtransactions, this game is worth its full price.

What a fantastic sight behold - A game where you can build things without waiting 30 minutes each time, or pay 99p for red gems that speed things up!

Seriously though, lots of care and attention has gone into the presentation of this great SimCity clone and the result is a game perfectly adapted for mobile play. It's not the most in-depth simulation out there, but there's enough to keep any budding real estate agent busy.

For fans of the genre this is highly recommended. 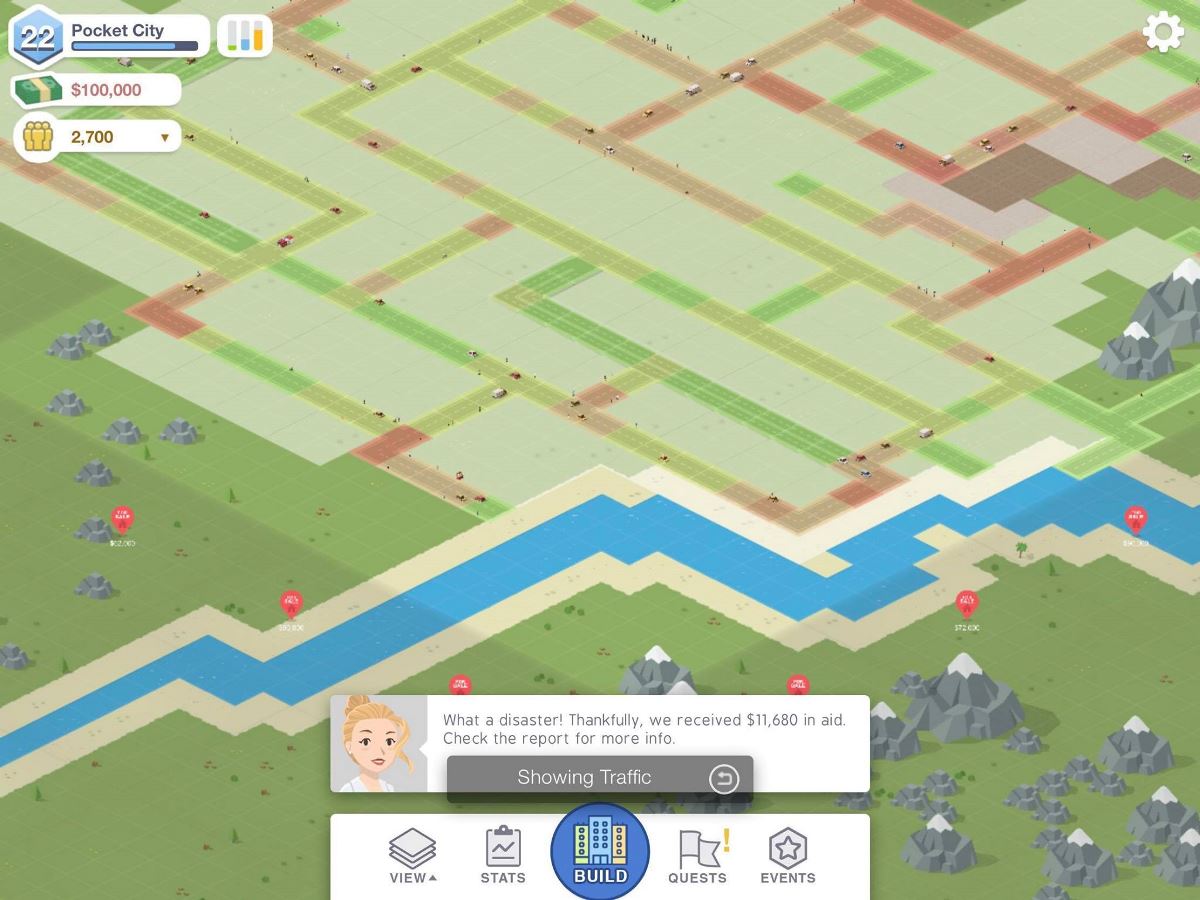 Games have a special relationship with the reward centers of the brain. Some really make you crawl through ashes for a glimmer, like a beam of sunlight through the gritt, as in Rebuild 3 and This War of Mine. Then there is the school of maximum pop per minute, the Michael Bay of brain chemicals, Pocket City.

Even if you don't have a history with Sim City - think of it as a progressive puzzler - Pocket City breaks the formula down and remixes it. There's reward around every corner, always in sight, almost in reach, hurrah!

It is compulsive! It is uncanny! It is a sense of deeply meaningful achievement on tap! Go and get this game now!

City builder fans have long awaited a premium game worthy of the SimCity legacy, and Pocket City could well be it.

The key thing for me was the choice of art direction. Sprawling city builders can tend to appear confusing on small screens, and the clean, simple design of Pocket City makes it accessible and easily readable, even with larger cities - a condition for portable gameplay for me.

With an agreeable art direction and proper level of depth, the title is well worth its price-point. Now here's to hoping the one-time-purchase model won't prevent the developers to update and expand the game for the benefit of our sprawling cities.

Win £50-worth of eShop credit in Nintendo's awesome Fortnite competition

New iOS and Android games out this week: Pocket City, Radiant One, Math and Sorcery, and more