There are plenty of digital CCGs vying for your attention out there. The biggest of them are festooned with licenses, huge marketing budgets, and player-bases into the millions.

Star Quest isn't quite in that league. It doesn't have the polish of the likes of Hearthstone, but it does have some interesting ideas that certainly make it worth checking out.

It's not going to replace Blizzard's behemoth on your iPhone or iPad, but it could well act as an interesting sci-fi companion to the fantasy-themed card-tosser.

The game is reasonably standard, at least for the most part. You've got a deck of cards, which you add to as you play. These cards represent different units, items, and strategies. You need to use them to kill your opponent.

That opponent is represented by a portrait. You've got one too. The battles take place on a grid made up of two lines of three spaces. The front and the back row.

Some units can only attack from the front row, and it'll take them a turn to get there. Others will jump straight into the fray. If there's no enemy opposite them, they'll go for the commander, taking off some of their hit points. 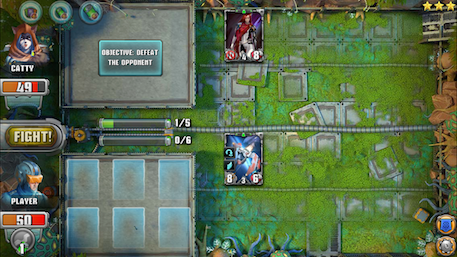 Every turn you're dealt six new cards into your hand. These cost energy to play, and your energy increases with every turn. You've got hero skills to use too, accessed by tapping below your character portrait.

In the single player campaign, victory conditions change from match to match. Sometimes you just need to kill your foe. Other times you've got to do it in a set amount of rounds, or just survive until reinforcements turn up.

This in particular is interesting, because it makes you play in different ways. Sometimes you need to go on the attack, other times defending is the key to success, and then there are the times when you need to balance out both.

There's multiplayer here too, but the community isn't quite as thriving as you might hope. That's a shame, and hopefully something that might change as more people hear about the game.

No, it's not perfect. But it's also got a pretty low bar to entry, a surprising amount of depth once you get into it, and plenty of cards and play-styles to collect.

It won't be to everyone's taste, and it's never going to rocket to the top of the App Store charts. But if you're a fan of the CCG then you should definitely pick this one up.

While it might not have the polish of some of the bigger games in the genre, Star Quest is definitely worth checking out
By Harry Slater
| Apr 24, 2018 |
iOS + Android
Find out more about Star Quest

The best mobile board games of April 2018