By Harry Slater
| Jan 25, 2018
iOS
|
Meteorfall
Get Meteorfall on...
Find out more about Meteorfall
Available on: iOS + Android

Digital-only card games are getting more and more popular. While multiplayer games like Hearthstone might seem to have cornered the market, if you're looking for a single player experience then there are a good few to choose from.

The latest of them is Meteorfall. Essentially it's a roguelike, but it's played with a deck of cards. So far, so Card Crawl. But while the game definitely fits into the same genre as Tiny Touch Tale's creation, it's by no-means a clone.

If you loved Card Crawl, or anything else TTT has made, then you're going to love this. But it's also well worth a look if you weren't a fan of those games.

At the start of the game you pick one of four different adventurers. There's a rogue, a wizard, a warrior, and a priest. Each of them has a different starter deck that's tailored to their skills. So the wizard has fireballs, the warrior has a sword, as you might expect.

The actual action is all based on another deck of cards that represents your adventure. There are monsters, events, and various looting possibilities all shuffled together at random to create your journey. And a big bad boss waiting at the end of it all too.

The game is a deck builder of sorts. You'll find and buy new cards each time you play, but slotting them into your hand isn't always the best idea. Chucking a weaker card into the mix can leave you waiting for something decent to come up. 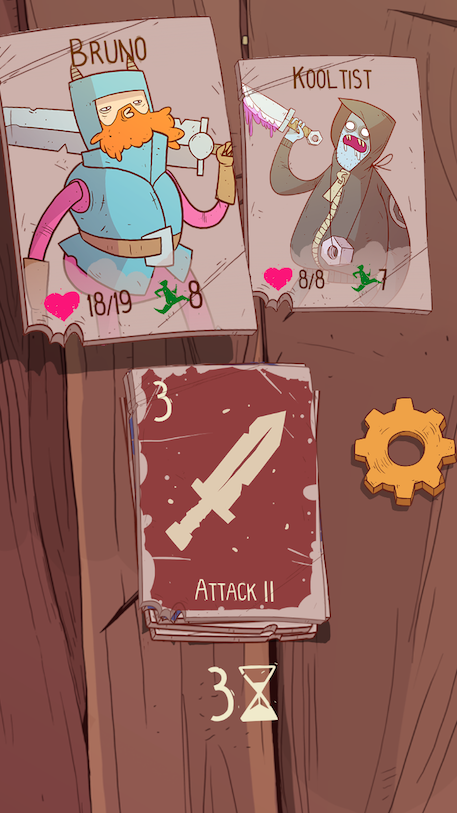 You level up as you play as well, getting better HP and stamina stats. If your HP hits zero it's game over. Run out of stamina and you'll have to discard cards to earn some more.

There's a really interesting balance of play here. You don't have to fight the monsters you come across, and can dismiss them with a Tinder-style swipe left. But then you won't get as tough, and you'll be useless in the end game.

Plus there's a real distinction between the characters. Using the same tactics with the rogue and the priest will be an abysmal failure. You need to learn where your strengths are and build a character that plays to them.

Obviously this being a roguelike most of your progress is gotten rid of when you die. You get some gems, which you can use to buy new cards for your starting decks when you've got enough.

Each failure feels like it's an important part of the learning process. You figure out where you went wrong, and then try and make sure you don't do it again.

Meteorfall is a supremely welcome addition to the mobile card genre. It's brilliantly well put together, super smart, and is deep enough that you can easily lose hours to it.

Meteorfall is exactly what you want from a single player card game. It's fun, it's deep, and it'll keep you coming back for more
By Harry Slater
| Jan 25, 2018 |
iOS
Find out more about Meteorfall
SEE COMMENTS

PGConnects: Hands-on with the newest stunt racer on mobile