Shadow Fight 3 - A triple-A fighter on mobile? Well let's have a look

And Shadow Fight 3 certainly ticks all of those boxes. It's a gorgeous lump of violence, full of interesting ideas that take the series in new and varied directions.

Is it the best fighting game on mobile? Well, there are some things missing here, but when it comes to brawling, it's pretty hard to beat.

The game sees you building a character up from scratch. You collect weapons and armour, then head out into the world to take on the bad guys one at a time.

If you've ever played a fighting game you're going to know what to expect here. You've got buttons to attack, a d-pad to move, and a health bar.

The aim of the game is to reduce your opponent's health bar to zero before they do the same to you. Landing blows fills up your shadow meter, which you can use to unleash a devastating attack. 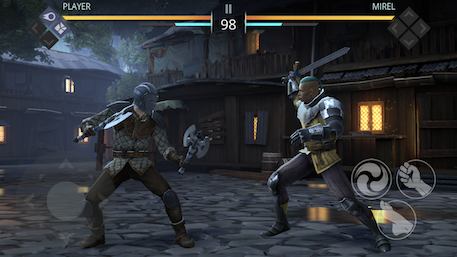 Unlike other fighting games, there's a good chunk of RPG progression to sink your teeth into here. The new equipment you unlock offers different boosts and buffs, and different weapons change your fighting style.

And it's a lot of fun working through the battles, mastering your skills, and finding out the fighting style that suits you best.

There are problems though. This is a game that wraps you around the knuckles the second you get anything wrong. It's cruel, and sometimes just landing a hit on the tougher opponents is a lot of hard work.

Live in the shadows

There's a decent amount of grind here too, as you'd expect from a free to play game. The fighting is deathly focused on timing as well. You need to wait for your opponent to make a mistake, then lash out with all you've got.

Is it the perfect fighting game? No? Is it worth checking out? Absolutely. There's a lot of fun to be had in the game, and a huge amount of depth too.

It's not going to be to everyone's taste though. And you're going to need a pretty new device to play it on too.

A slick and violent brawler that pulls a few punches but is still well worth a look
By Harry Slater
| Nov 20, 2017 |
iOS + Android
Find out more about Shadow Fight 3

Lineage 2: Revolution review - A revolution in MMORPGs or the same old story?