Foolball review - A medieval sport full of hilarity and violence

By Harry Slater
| Nov 10, 2017
iOS
|
Foolball
Get Foolball on...
Find out more about Foolball
Available on: iOS + Android

Actually that sounds weird. Anyway, if you've ever read anything I've written on this site, you know that me comparing something to Nitrome or Colin Lane means I probably like it a lot.

And you'd be right. Because Foolball is an awful lot of silly fun. It's not without its problems, but it's definitely worth checking out.

The game is essentially a hyper-violent sport set in a castle. Two characters square off, and the ball, as you might be able to tell, is the court fool.

On top of that, the goals are both on fire. The first person to score three points, by pushing the fool through their opponent's goal, wins. The loser is devoured by a tentacle monster. Because of course they are.

You've got three buttons to control your character. You can move left and right, and then mash another button to swing your weapon and jump. 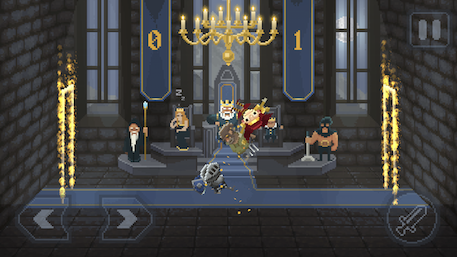 The gameplay is decidedly silly, but in the best sort of way. The game throws other things into the mix as well. The goals change size, there are sometimes bits of furniture in the way, and a chandelier that dangles down and the fool can get caught in.

Get stuck in the corner for a level for too long and a springy boxing glove will punch you back out into the middle of things.

It does get a little samey after a while, but there's an awful lot of different characters to unlock as well. There's multiplayer too, but it didn't actually work when I tried it out on my iPhone 7.

If the multiplayer gets fixed, or if it works on other devices, then you can add another point to the score.

Even still, there's a lot to like in Foolball. It's fast, it's silly, and while it might just be a polishing up of other ideas, it's presented well enough that you're not going to mind too much.

A highly polished silly sports game. It might not be the most original game in the world, but it is a lot of fun
By Harry Slater
| Nov 10, 2017 |
iOS
Find out more about Foolball
SEE COMMENTS

Hit a fool through burning hoops in Foolball, coming to iPhone and iPad November 9th

Perform for the king in medieval sports game Foolball, releasing next month on iOS