It takes a little while to truly feel the charms of Golf Story, but once it hits it'll be hard to shake the urge to dive in again and again.

It's got a good dash of RPG and a big ol' pinch of sports game, and that combined with Mario Golf's three-click system means you've got yourself a bit of a winner.

It don't mean a thing

Golf Story kicks off with a heart-warming flashback you and your dad playing golf. In it, you're taught the basics in front of a crowd of geese, and start to believe that some day you're going to go to the big league.

That doesn't exactly happen as the game continues years later when you're a somewhat unsuccessful adult, and eventually you decide to go back to your golfing roots.

You have to find a coach, play through the various areas, and pick up new skills before competing professionally. Oh, and have a ton of fun on the way. 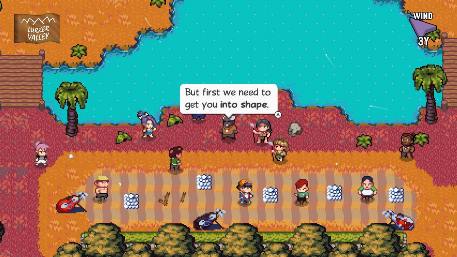 The characters are what make the game more than just a cutesy golf simulator. They're all rather daft, vary from location to location, and you can't help but grow attached to them as the game goes on.

Though the main concept is to play across nine holes in eight locations, there's so much more to the game than that. Each world is riddled with side quests, and some of them help you learn weird and wonderful techniques, like bouncing your golf ball off a turtle's back to launch it further.

You earn money for completing quests, which you can spend on new equipment, and each task completed earns you various amounts of XP. Once your bar is full you level up and pick what stats you want to improve.

The interesting thing here is that you have to balance out increasing the power of your swing with the other available features, like 'spin' and 'accuracy'.

Any time you increase your power, the other stats will be affected as well, which is a really neat idea.

Grab a couple of Joycons and you can take on a friend on courses that you've already unlocked. It lacks the features of the rest of the game, but that's not really the point for this kind of quick-play PvP.

Golf Story would be nothing if its primary mechanic was awful but luckily the golf itself is brilliant. It eases you in but doesn't hold your hand, and all through the story you use the same three-click system.

It manages to avoid tedium with its slow introduction of different skills and techniques, and by using environmental aspects like the slope of the green or the strength of the wind.

You also have to watch out for marked areas that host molerats or cheekybeak birds. Those guys will steal your ball, so you have to plan your shot accordingly. 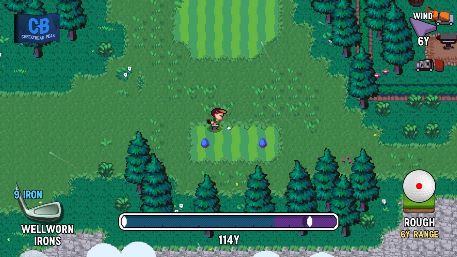 Another excellent element is the integrated HD Rumble. Whether it's responding to conversation, the swing of your club, or that lovely, little 'plonk' you get when your balls sinks into the hole, it's one of the most interesting uses I've seen of the feature yet.

If you ain't got that swing

I admit, it took me a while to get into Golf Story. I enjoy a game of mini golf I usually find the full thing a bit boring.

The golfing element is fun, the story is interesting, the characters are great, and the game's unlike most of the things we've seen on Switch so far.

So, if you love an RPG or a golf game, I can't recommend this enough.

Sacrifices is an Aztec city-building god game, coming to iOS and Android on October 7th

The Gold Award-winning RPG, Golf Story, is getting a physical Switch release and we're psyched about it