Eden: Renaissance review - A game that fits a bit too comfortably in the Lara Croft GO mould

Eden: Renaissance is a game that's happy to sit in the shade of the genre that Hitman GO. It's a posh looking 3D puzzler that sees you moving through a series of levels.

There's a path to follow, that branches here and there. There are things to push and pull, switches to throw, and enemies to avoid.

It's all pretty standard stuff, but there's some fun to be had here all the same. There are rough edges too though, so if you're looking for an introduction to this sort of play, you're better off poking your head into the GO series first.

Quaking in me boots

The game sees you travelling through a series of mysterious caverns. You're an archaeologist who's discovered a weird glowing box. Could it be the key to saving the world from the disasters that are plaguing it?

I mean, yeah, probably. That's the sort of thing that happens in games. You start off in the frozen wastes of Antartica, but each chunk of levels has a different theme. Like fire, water, greenery, that sort of thing. 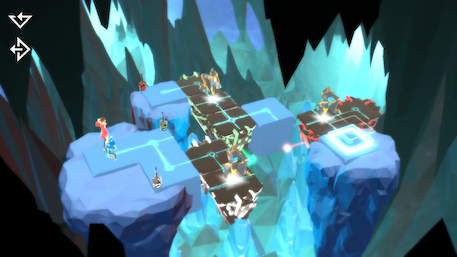 The game adds mechanics pretty quickly as you play. You'll get a cute robot sidekick pretty early on, and he can smash bad guys if you sneak up on them from the side or behind.

As you make your way through the game the bad guys get badder, the puzzles get harder, and things generally ratchet up a notch or two.

But the basic premise always remains the same. You swipe to move, tap to interact when buttons pop up, and aim to get from A to B without being smashed to bits or falling down a big hole.

The controls are sometimes a bit fiddly, and sometimes a little on the slow side. When you've got nothing in front of you but five blocks and the exit, swiping five times just feels annoying. 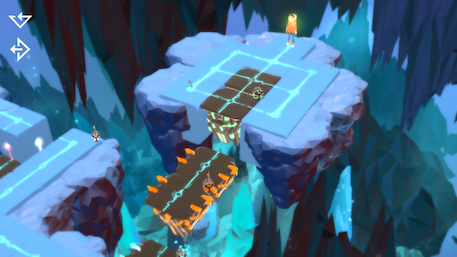 Pulling blocks isn't particularly great either, and a number of times I've fallen down a hole instead of grabbing a block and dragging it in the right direction.

There were some strange bugs as well. Including one where I went back in a level and the camera got stuck, leaving me without a view of what I was doing.

Still, there's nothing horribly broken about Eden: Renaissance. It's not the most entertaining game you're ever going to play, but it does the job. Albeit not as well as it could in certain places.

If you've rinsed the GO games and you're looking for something in the same style to have a crack at, then it's worth picking up. If you haven't though, I'd suggest playing those first.

A decent enough game, but there's not enough here that really sparks into life
By Harry Slater
| Jul 25, 2017 |
iOS
Find out more about Eden: Renaissance

6 reasons to experience The Descendant on NVIDIA SHIELD

Work together to survive an alien world in isometric puzzle adventure Eden: Renaissance