Unless you've been living under a (perfectly cubic) rock for the past decade, you'll know the deal with Minecraft. But, just in case, here's a quick refresher course.

Minecraft is a survival game, where you must find food, brave the elements, and fight off freaky monsters who appear during the night. But you can also rip materials out of the earth (that's the "mine" bit), and turn them into tools and structures (that's the "craft").

It's a bit like playing Lego, but every time you need some new blocks you need to venture into a dark cave, jump over some lava, fight a few skeletons, and then try and find your way back to your house.

Really, you can play it however you want. The game simply drops you into a randomly cobbled together world and asks you to get on with it. You can build, you can explore, you can become a farmer, a trader, or a warrior. There are no goals, no missions, no quests: direction comes from within.

You can even sack off the survival element altogether, and play in creative mode where you have unlimited access to every crafting material in the game, and spend an afternoon making a floating fortress, or a pixel art mosaic, or a working calculator.

Plus, you can play alone, or invite some friends to play with you. Which brings us onto the Switch version of the game, and what makes it different to the many other Minecraft variants. 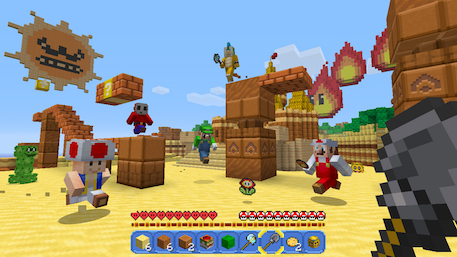 So, in terms of multiplayer, you can play with three other friends on the same system - but you will need full controllers (a pair of joycons or a pro controller each).

And you can play with 8 pals in servers online, but there's no built-in chat and you can only play with registered friends.

As for performance, the game lies somewhere between the PS3 and the PS4 versions - evident by the fact that the world size is set to "medium", compared to last gen's "small" and current gen's "large" (and PC's "infinite").

So it's smooth as butter (one of the few things you can't make in Minecraft), but blocks pop in over the horizon, and it's only 720p - though port studio 4J is looking into a patch to get 1080p when docked. 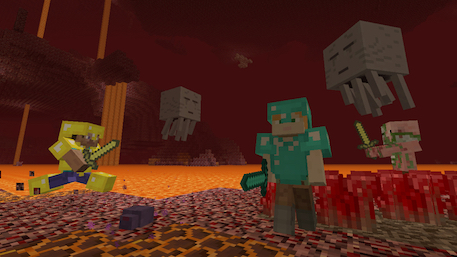 But really, the beauty of this version is the portable mode. Minecraft is the perfect game for playing in bed or on a train or in a leaky tent in Wales.

And this is definitely the best portable take on the game yet - more fully featured than the mobile edition, and bigger and better looking than the Vita version.

It's not perfect though. There's annoying inconsistency in how the touchscreen works, with some things being tappable (your quick select bar, the crafting menu) and others not (your inventory).

You're better off not using it - a shame, when the deft mix of buttons and touchscreen made the Vita version such a joy to play.

Finally, there's the content. You will get some Nintendo-exclusive goodies from the Wii U port, like a (surprisngly exhaustive) Mario skin pack, extra sound effects and textures, and a Mario world to run around in.

Also, the game is not entirely up to date, missing a few things from the latest Xbox One and PS4 versions. Patches will be released, and new features added, but right now it's a tad inferior.

While Minecraft for Switch might not be quite up to the PC or console versions of the game in terms of things like graphics or world size, the ability to take the game on the go is a massive advantage.

If portability is critically important to you (it is to us, naturally), this Switch version could easily be thought of as the best version of Minecraft yet made.

The endlessly creative Minecraft works best as a portable game, making this (almost) fully-featured Switch port one of the best versions of the game
By Mark Brown
| May 25, 2017 |
Switch
Find out more about Minecraft: Nintendo Switch Edition

Beastmen sacrificial chambers, rivers of blood, and more are shown off in new Warhammer Quest 2 screenshots

Minecraft Bedrock Edition is bringing us all together this June

Minecraft: Nintendo Switch edition is not running at 1080p docked due to switching issues, could be patched

Get building on the go: Minecraft: Nintendo Switch Edition is out now