After Mario Kart 8 Deluxe's stellar cracking launch over the weekend, it's hardly surprising to learn that the game's currently sitting in first place in the GfK Top Ten charts. 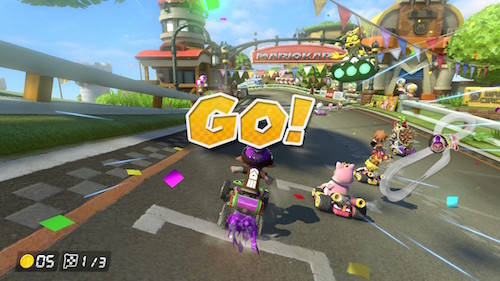 All sorts of impressive figures are being thrown around today. Not only is MK8D the fastest selling game of its series, it's also the first Nintendo boxed game to bag a number-one spot in the UK since 2011; a whopping six years ago.

On the game's April 28th launch day, Nintendo saw 459,000 copies sold across physical and digital sites in the US alone. Just to top the whole thing off, MK8D has received the most 'perfect' review scores than any other in the series to date.

Now we've just got to see if this momentum can continue when it comes to the next two big'uns: ARMS and Splatoon 2. What do you guys think? Let us know in the comments below.

Nintendo drops the details of The Legend of Zelda: Breath of the Wild's Expansion Pass

Zynga's Mafia Wars soft-launches on iPhone and iPad in Canada