Inquisitors are, to all intents and purposes, the detectives of the Warhammer 40K universe. So it seems only fitting that Eisenhorn: Xenos, which follows the most famous of all of the Inquisitors, takes its cues from Batman: Arkham Asylum.

This is a rich and stunning third person adventure that sees you unravelling a mystery set to destroy the Imperium of Man.

There are fights, there are gadgets, and there are even some laughs. And the whole thing works pretty darn well on mobile, save for a few quibbles that keep the game from pocket gaming perfection.

The game casts you as the titular Eisenhorn, a member of the Imperium's secret police force who is tasked with rooting out the worst heretics and bringing them to justice. Justice usually means murdering them, in case you were wondering.

Everything is controlled with swipes and taps. Move a thumb across the left of the screen to walk, and one around the right to change the direction you're looking in.

Context sensitive buttons spring up when you're near something you can interact with. It might be a jump you need to make, or a console you need to poke at to open a door.

You're walked through the various tools at your disposal at a steady pace. During fights you get to use a big sword, a big gun, a psychic push, and a button that slows down time and allows you to pick your shots. 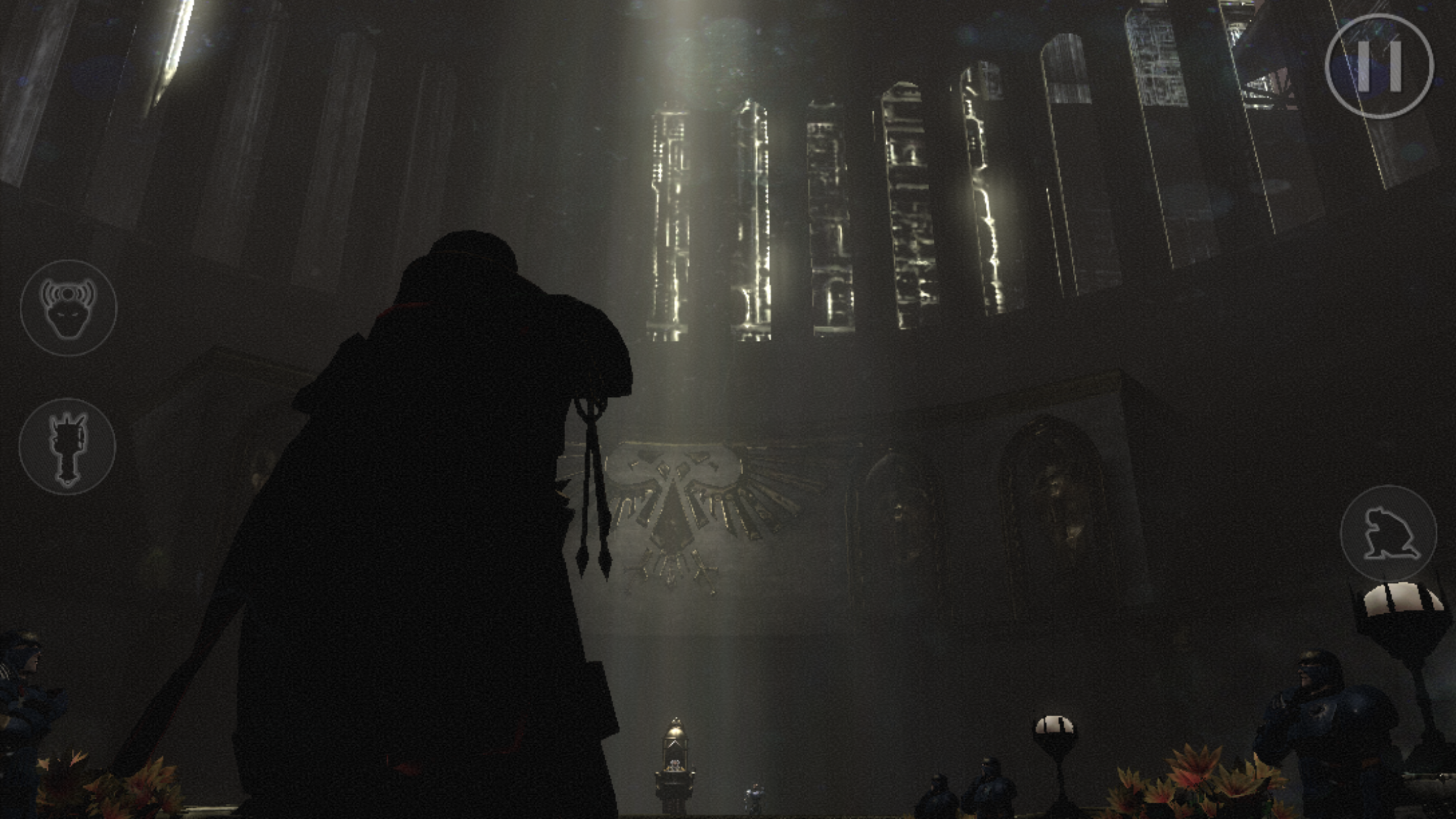 There's a dodge button too, and much like the dark knight's console adventures, enemies that are about to attack you are highlighted. You can parry their swipes if you get the timing right, or dart out of the way.

The comparisons don't end there though. There are stealth sections, plenty of air ducts to clamber through, and a physic view that owes more than a little to Arkham's detective mode.

The Auspex that you carry around with you allows you to hack various objects. You're clearing minefields with it, as well as opening doors and reading data slates.

You'll be crouching under steam vents, figuring out paths through laser gates, and assassinating unknowing guards by luring them with your spooky brain powers. And there are tappy quick time events, because you can't have an action-ish game without QTEs.

There are also companions who fight alongside you, and you can change their equipment in the same way you change your own. Some will help you fight, others help out in different ways. 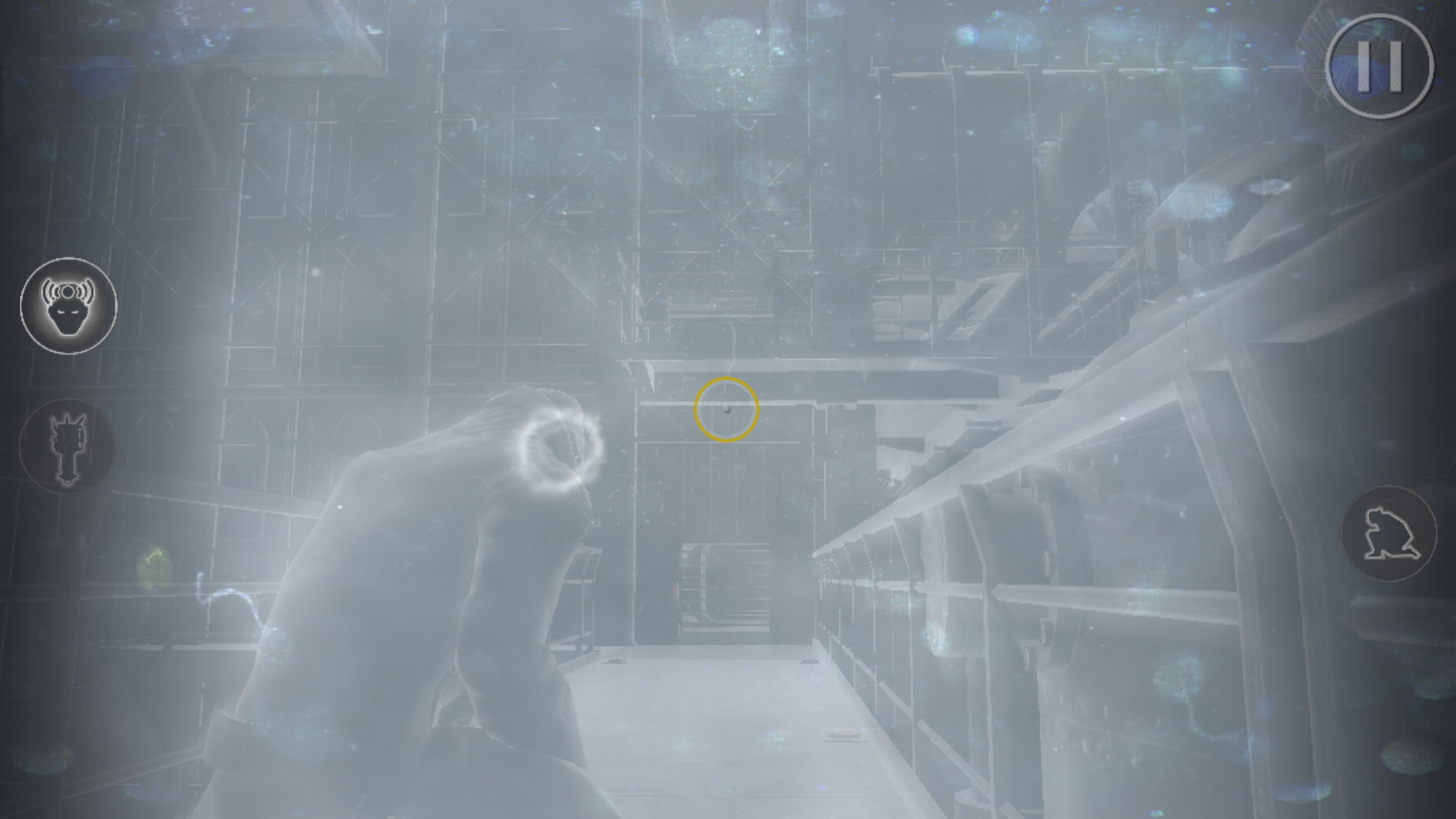 Everything is folded brilliantly into the grim and slightly pompous lore that Games Workshop has created.

Your gadgets have silly pig-latin names, your swords all glow with energy or growl with chainsaw-like teeth, and your swoopy cape is adorned with purity seals and other accoutrements.

That's not to say that Eisenhorn is for fans only though. This is a game that's up there with the best third person games on mobile.

The violence is brutal and swift, the story keeps things interesting, and the gorgeous, Unreal-powered world really is a joy to wander through.

There are problems here though. The game has a slightly awkward save system that isn't brilliant for mobile-sized play sessions, and to say that it drains the battery a little would be like saying that things went only pretty bad for the Space Marines during the Horus Heresy.

These things don't detract too much from the underlying fun though. This is a well-balanced, eminently engaging video game that stands head and shoulders above most of the dross that washes up on the shores of the App Store.

It's deep when it needs to be, fun in all the right places, and even the controls work well enough that you won't be too bothered there are other versions out there you could be playing.

If you're anything other than the most casual of gamers then this is an experience you need to give a go.

It might not be incredibly original, it might have lots of floating skulls and men with special magical brain pipes stuck in them, but it's also one of the best games I've played on my phone for a good long while.

[Update] Establish a kingly line in Reigns, now out now on iOS and Android

A family tree, a gorgeous painting, and 35 levels - Rusty Lake's new project will be their most ambitious yet