EGX 2015: MouseCraft mixes Lemmings and Tetris, and it's coming to mobile next year

Mice to see you

MouseCraft is my last meeting of the first day of EGX. I'm quite stressed out because my train was cancelled this morning, and also I'm in London.

MouseCraft looks lovely. There are mice, there's a cat, and it's all super-duper polished. I'm playing it on a Windows tablet, but it's slated to come out for none-Windows tablets as well. Which is good, because, urgh, Windows tablets.

It's described to me as a mix between Tetris and Lemmings. And it's basically exactly that. This probably won't come as a surprise to you because the game has been out on Vita for quite a while now.

I play through the first ten levels. They're neat, and they introduce me to the mechanics of the game at a snappy pace. Get the mouse to the cheese using the tetrominoes to make a path for the skittering rodents. 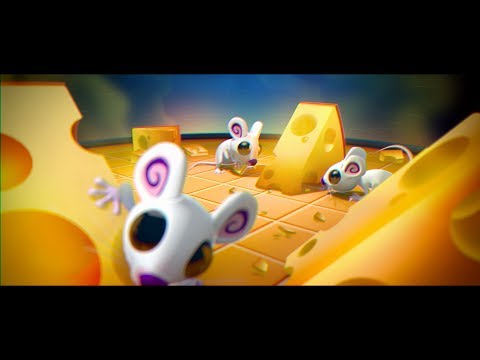 Did I mention there's a cat in the background? The cat is a doctor called Schroedinger who's using the mice to collect gems. There's probably more of a story than that, but I don't remember any of it. Who remembers things nowadays?

I like the game. It's clever, but it also makes me feel clever, which is what the best puzzlers do. If a puzzler makes you feel like an idiot for not getting it then don't worry, it's the game's fault, not yours.

You're a wonderful human being full of infinite potential. Or you might be an idiot, I don't know we've probably never met.

There are crumbling blocks, exploding blocks, mechanical rats that you need to drown, levels that involve freeing the mice and then building them a new path after they've run around for a bit.

It's Lemmings meets Tetris. I think I said that before. But it takes the best bits of those games and then let's you play. There's a right way to do things, but there are lots and lots of wrong ways to do things and still open up the next level.

The chairs in this press area keep squeaking. Not like mice though, like someone running their nails down a blackboard. It's making me sad.

Mousecraft didn't make me sad though. It made me smile. It made me go "ooh." It made me want to play some more of it. And I probably will when it comes out for iOS at the start of next year.

Now I'm going to find some WD40 to sort out those chairs. Seriously, it's going right through my teeth.

Want more? Check out our growing collection of MouseCraft articles!

Google has doubled the maximum app size for Google Play

Pocket Gamer is looking for a Clash of Clans expert

Watch as these mice bounce and climb to get the cheese

MouseCraft is a cheesy puzzler that combines Tetris with Lemmings, it's out now on Vita