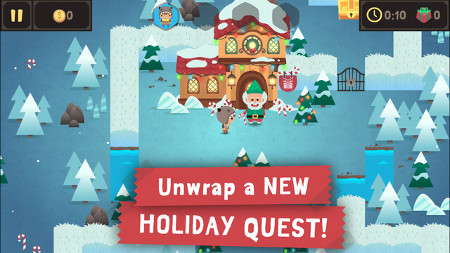 Monsters Ate My Birthday Cake, the top-down puzzling adventure, has been updated with some new content because it's nearly Christmas. Yay.

There's a new character called Codger the Elf in Powder Peaks who'll set you on an island-spanning quest to collect up a load of lost presents. Finish the quest and you'll get a new costume for Niko.

When we reviewed the pre-holidays version of the game we called it "a funny and charming puzzle collection, with lots of secrets to uncover, that's only let down by some finicky controls."

The new levels are available as a free update right now. So if you want to get in the cake-based spirit, you could do a lot worse than picking them up.

Twisty Planets, the clever world-moving platformer, is out right now for Android