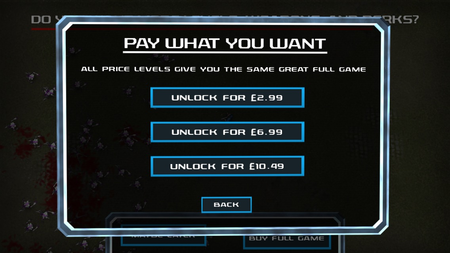 10tons's gory new twin-stick shooter Crimsonland HD lets you play a few levels of the game for free, before hitting you with a one-off pay wall. It's one of an increasing number of games using the try-before-you-buy business model.

Jaakko Maaniemi says that his studio is experimenting with 'try & buy' and 'pay what you want' because "we have felt the increasing difficulty of selling premium apps over the last few years".

After seeing some success with trial versions on Windows Phone and PlayStation Store (two platforms that have proper support for upgrading games), 10tons experimented with try & buy on iOS and Android with Sparkle Unleashed.

"The results were pretty good," says Maaniemi. "It's certainly not worse than premium".

And it works for his studio, too, by providing a middle ground between an upfront fee and the many microtransactions of F2P. "We reckon customers should be happy that they don't have to pay anything without trying, and for not risk getting fleeced handsomely by monetisation". 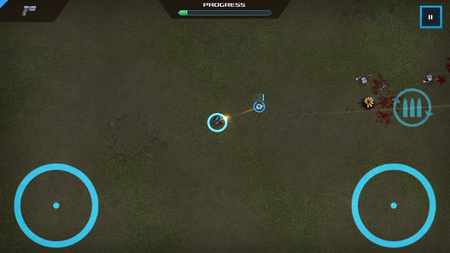 But why offer multiple price points for the same game?

Maaniemi says this was "inspired by the 'pay what you want' schemes that are somewhat popular on PC, especially on bundles like Humble Bundle. We just wanted to see how something similar would be received on iOS."

And from very early data (the game came out this week), 10tons has seen people paying at all three points. "As expected, by far the most people choose the cheapest option, very few choose the middle option, and a fraction choose the most expensive option."

The studio will need a "few more weeks or months of numbers to get an idea of what the full picture looks like". But, "at least we haven't gotten any significant rage about it so far."

Of those people willing to spend over £10 on a game they could get for £3, Maaniemi says "we reckon they're motivated by wanting to support developers of the kind of content they enjoy."