The first thing you learn about Space Age, the long awaited follow-up to The Incident from Big Bucket Software, is that "the year is 1976".

The second thing you find out: "it is the future".

This is retro-futuristic adventure, inspired by evocative sci-fi from the 1950s, like Forbidden Planet, The Day the Earth Stood Still, and The Twilight Zone.

It's all shiny metal space rockets with pop rivet seams and porthole windows, spacesuits with big bubble helmets, and launchpads powered by Cold War tech. Even the purple-skinned aliens look a bit like humans in lumpy rubber suits.

You play as one member of a science and military team that has landed a spaceship on a seemingly uninhabited planet called Kepler-16. As you work through the game you'll learn about the planets, its inhabitants, and your role in it all.

This story - a twisty and enigmatic tale about the clash between old and new - is masterfully teased out.

In every level, Big Bucket doles out another tantalising hint about the story - maybe on the turbulent history of the planet and it's people or something interesting about your character's past - and dangles it in front of your nose.

These hints and cliff hanger endings make Space Age hard to put down. You just have to keep plodding through until all the mysteries are solved and the plots are resolved.

And even though you have a grand, towering view of each area you visit - especially on iPad - it's shrouded in darkness until a character moves forward and clears the jet black fog. It's all about discovery and surprise. 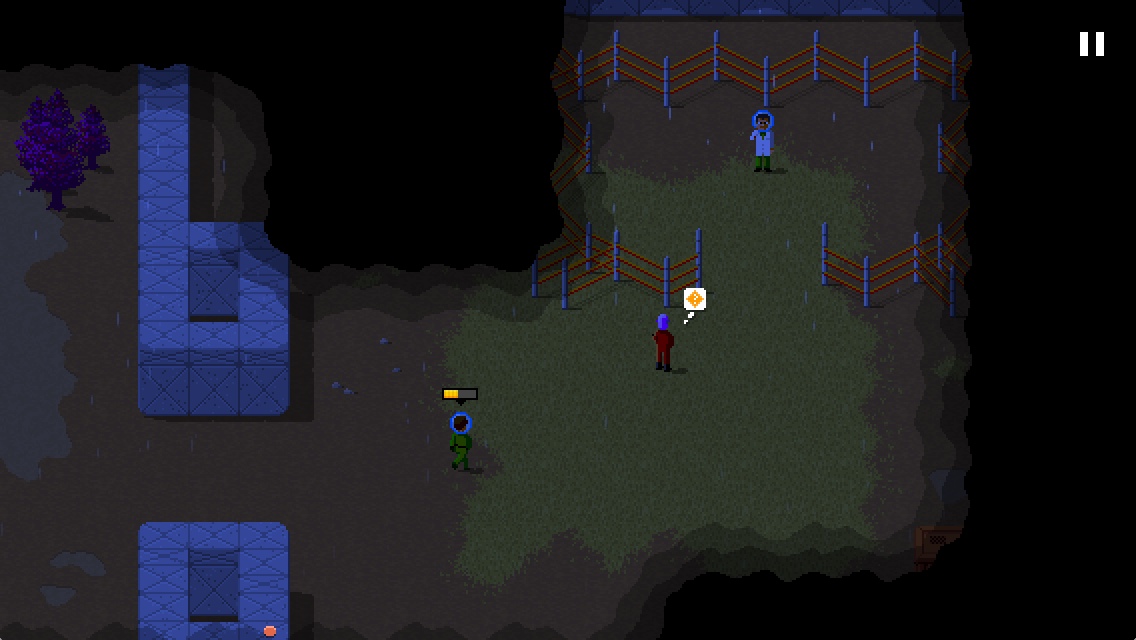 In terms of gameplay, Space Age is tough to pin down. There's a little bit of everything, but it's not focused on any one genre.

There are some light stealth sections where you cautiously move about the screen, to evade patrolling guards. And if you get seen, you can blast away aliens with a laser just by tapping on them.

There are also puzzles with inventory items. And you move your characters around like a real-time strategy game, tapping to move, clearing a fog of war as you go, and selecting multiple characters by lassoing them in a selection box.

Designer Matt Comi calls it a "real-time tactical adventure", and points to games like Cannon Fodder and Metal Gear Solid as influences. But you shouldn't expect much in the way of traditional gameplay or mechanics. 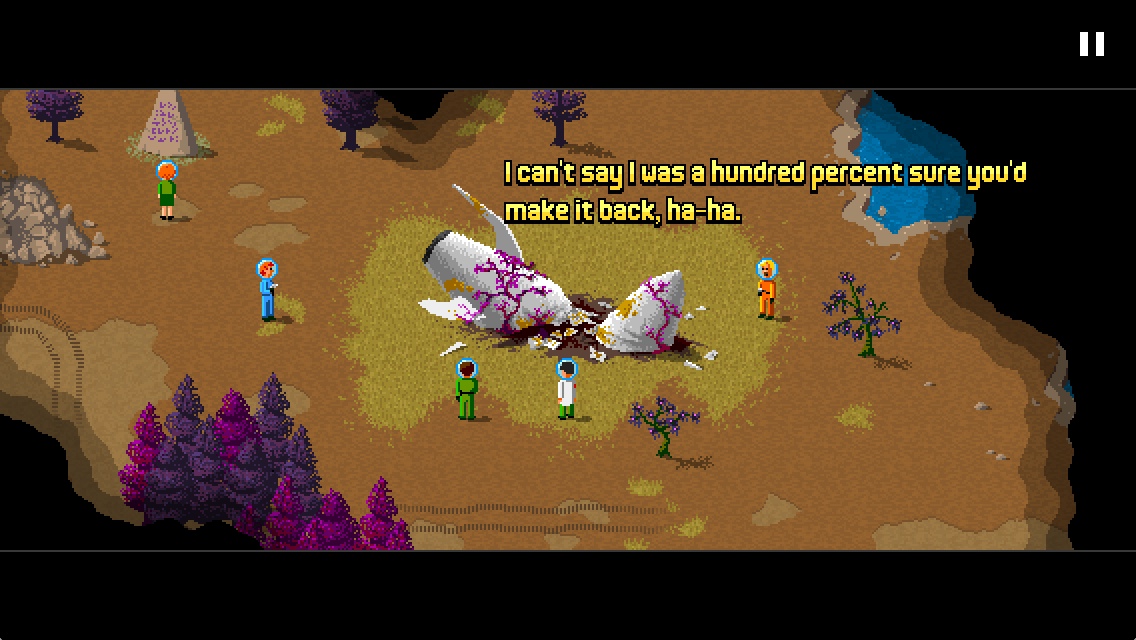 Long stretches of Space Age are filled with nothing but dialogue. The chatter between the astronauts is well written, though, and Comi and co-designer/artist Neven Mrgn (who last made Blackbar) get a lot of wit and comedy out of his characters, despite the fact that the game is not voiced.

It comes from the comic timing, and the way the characters' mouths manically swing open and shut when they talk like in old LucasArts games.

This dialogue is often only punctuated with light gameplay to fill the gaps. A bit of sneaking here, and some simple logic conundrums here. And then back to the narrative.

Ultimately, Space Age is more interested in story and the experience, than gameplay and action. It reminds me of Sword and Sworcery most of all, but it will appeal to those who liked Year Walk, Waking Mars, and DEVICE 6, too. 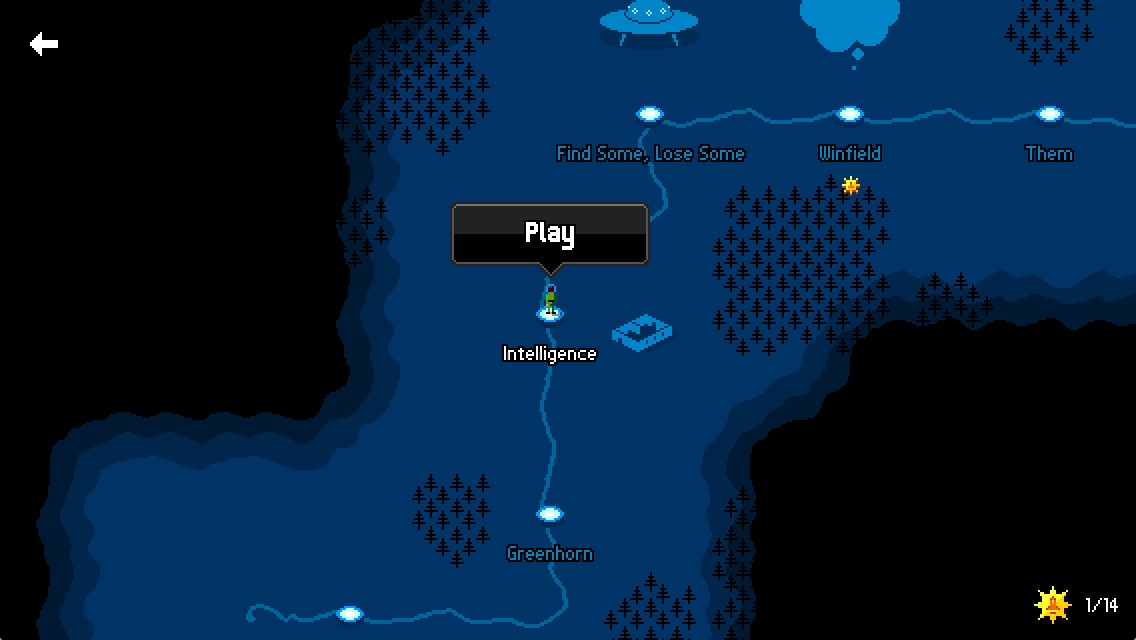 And the presentation will appeal to retro fans. The pixel art by Mrgan is colourful and expressive. And the orchestral score by Cabel Sasser could be ripped straight from a million sci-fi PC games from the early 90s.

Space Age is shaping up to be something quite special. It has a curious mix of game genres, which are often tossed aside completely in order to tease out a mysterious story.

So if you like your sci-fi retro, your pixels big, and your stories enigmatic, this is one to watch out for. It's coming to iOS in about October (followed by a Mac version, but no Android edition is planned).

There's a kraken in these seas and it's coming for you